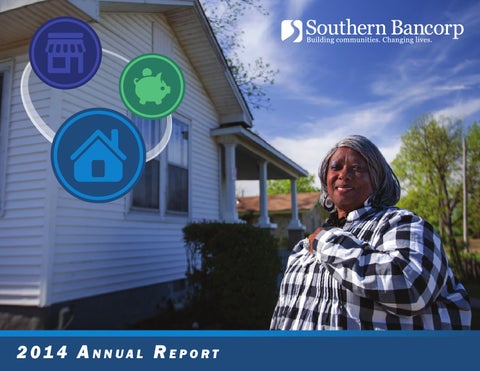 Vernetha Jackson In 2014, this 63-year-old grandmother and public school employee realized her dream of homeownership with Southernâ&amp;#x20AC;&amp;#x2122;s support. Meet Vernetha and hear her story at banksouthern.com/stories.

A Message f r o m t h e C EO At Southern, we describe ourselves as a “unique financial institution,” which inevitably leads to the question of what makes us unique. While we could talk about our role as a Community Development Financial Institution (CDFI) serving underserved people, businesses, and distressed communities; or the fact that Southern is a family of financial institutions including a community bank, a bank holding company, and a 501(c)(3) financial development organization working together to raise individuals and communities up through a variety of responsible financial products and services; the best answer is much simpler. We are a values-based bank. So what is values-based banking? It’s an idea that permeates our organization from the inside out. Our core values of Relationship, Accountability, Innovation, Sustainability, and Empowerment are set up to guide our interactions within Southern and drive our connections with customers and the community. By living each day through the lens of these values, we are better equipped to provide the level and type of financial services needed in rural America. We believe that the people living in these communities are more than just data points on a spreadsheet. They are aspiring entrepreneurs, hardworking future homeowners, and families pursuing their dreams of a better life. More than just profit margins—fulfilling hopes, dreams, and aspirations is what drives our decisions. That’s values-based banking, and that’s what makes us unique. This annual report provides a look back at an impactful 2014, and it also provides a look ahead to where Southern is going. We have yet again reached record profitability, and more importantly, we have created audacious goals for ourselves over the next decade, centered on affordable housing, job creation, and savings. I’m excited to share them—and our values—with you.

Opportunity in R u ra l A m e r i ca Responsible and responsive credit and capital provided by financial institutions are the fuel that lights the fire of economic growth in this country, and without it, the fire goes out. Unfortunately for many rural communities, that fire is fading due to many community banks either closing or consolidating with larger financial institutions. When that happens, it not only means that the door is opened to predatory lenders, but also that the friendly faces in the bank disappear, along with the relationships that enable capital access. In many areas, lending decisions have moved into centralized, urban offices often hundreds of miles from a community. In these offices, away from the main streets and dirt roads, applicants become little more than numbers on a spreadsheet, and without the personal relationships, knowledge, and stories, loans are more likely to be denied and capital access more likely to dry up. This is the threat facing rural America. As other banks leave rural communities, we continually seek opportunities to expand in their place and bring our unique brand of financial products and services to those who seek to improve their lives. We have proven that these communities are eager to light their economic engines, they just need the financial spark. The following case studies show the net loan growth for three recent acquisitions both pre- and post- acquisition in an effort to illustrate our ability to turn challenges into opportunities.

many Delta communities. While it has benefited from the presence of major industrial employers

involved in the local steel industry, this community has also been wrought by low wages, high crime rates and a steady depopulation. However, the community has shown a tenacity that is

unrivaled in many of its neighboring communities. This is what drew Southern to Blytheville in 2009 through its purchase of First National Bank.

Underscoring our belief that rural communities are capable of positive economic growth and financial return, Southern has tripled capital investment levels in Blytheville from what they were pre-acquisition, proving that an efficient, values-based approach can have a positive impact on the community.

unscathed by many of the troubles its larger neighbor to the north has experienced. With

population, unemployment, and crime rates that mirror national averages, Trumann could be called a shining beacon of economic prosperity were it not for a distinct lack of small business growthâ&amp;#x20AC;&amp;#x201D;the long term lifeblood of any community.

Southernâ&amp;#x20AC;&amp;#x2122;s acquisition of the Bank of Trumann in 2009 was a call to not only maintain the bankâ&amp;#x20AC;&amp;#x2122;s history of financial strength, but improve upon it with increased capital investment to support small business growth. After a slight drop in net loans upon acquisition, Southern not only returned the bank to a positive rate of net loan disbursement, but brought it to a level that outpaced pre-acquisition levels.

has a rich industrial connection, in this case with the oil industry, which has helped keep its

unemployment rate steady. However, a high percentage of individuals living below the poverty line, particularly those under 18, shows that challenges remain and that there is progress to be made.

Timberland Bank had experienced its own challenges in lending, placing it in a position in which selling to another institution was the best choice for shareholders and stakeholders alike. And while this starting position for Southern was itself a challenge, the new El Dorado branches of Southern were back to positive levels within a year of acquisition.

In 2014, Southern continued its growth into rural communities through acquisitions in Eudora, Arkansas and Mound Bayou, Mississippiâ&amp;#x20AC;&amp;#x201D;each with high poverty rates and few other banking options. Southern is committed to seeing the same, if not greater, level of success in these new communities as experienced elsewhere. Our optimism is underscored by our proven ability to create economic opportunity.

â&amp;#x20AC;&amp;#x153;Let us all take more responsibility, not only for ourselves and our families but for our communities and our country.â&amp;#x20AC;? William J. Clinton Former President of the United States

A Vision for the Future

For the past two years, Southern has been on a journey to rediscover its founding principles and refocus its efforts on the core mission for which it was founded nearly three decades ago. The original vision set forth for us was simple: bring economic opportunity to underserved communities through responsible and responsive financial products and services. And while we have adopted various methods of community engagement and development over the years to great success, our roots have called us to refocus our efforts while increasing the scale of our work. Today, we embrace our past as we look toward our future. In pursuit of our mission, we have adopted three audacious goals toward which we will work over the next decade.

Stefanie, Brett, and Annalee Davis with their dog White Sox.

Empowering Homeowners Buying a first home is one of life’s major milestones. For many, homeownership is one of the best ways to accumulate assets, build wealth, and secure a stronger financial future. Of course, the home buying process itself can be intimidating, so when Stefanie and Brett Davis began thinking about purchasing a home for their young family, they wanted to learn more. And as a teacher, Stefanie couldn’t pass up the chance for her students to learn something new as well. Southern Bancorp staff came to her school and taught both students and teacher about the home buying process—an educational service Southern provides to customers and residents across its markets. In 2014, Stefanie and Brett put that knowledge to use, and with Southern’s assistance, purchased their first home. In 2014, Southern supported 664 people in their pursuit of homeownership and improved net worth.

C r e at i n g J o b s b y Supporting Entrepreneurs Southern believes that entrepreneurs are an important ingredient to creating economic opportunity, which is why we strive to find ways of bridging the gap between rural entrepreneurs and financial capital. For entrepreneurs Peggy and Eddie Gong of Cleveland, Mississippi, this gap was starting to appear too large to conquer before Southern’s lenders came into the picture. Business experience is something the Gongs have in great supply. Having operated a successful print shop in Cleveland for several years, they know what it means to build a business from the ground up. Yet even this wealth of experience was not enough to convince other banks to help them with the SBA loan they needed to realize their dream—a family-friendly bowling alley to cater to the community’s large youth population. The Gongs met with Southern’s lenders who listened to their story, read their business plan, and saw the potential for what they wanted to bring this college town with few entertainment outlets. With financing in place, Harmony Bowling is under construction and set to open its doors to hundreds of eager young bowlers in the summer of 2015. In 2014, Southern supported

Building Economic Security Understanding and developing habits that positively impact your credit, as well as avoiding financial pitfalls that can create barriers to achieving your financial goals, work together to build economic security and independence. Southern’s goaloriented approach to financial well-being stresses the importance of getting one’s financial house in order through a variety of products and services that when used together, can lead to life changing results. As a young mother, Angela Chestnut didn’t spend much time thinking about her financial health. Working two jobs and raising her children provided little time for sleep, much less worrying about her credit score. However, as she grew older, she began to think about her family and what she needed to do to provide a safer present and future for them. While living in public housing, Angela made a decision to get her finances in order to provide a permanent home for her family. She visited with Southern Bancorp’s credit counselors to build her credit, opened a matched savings account to help her both understand and build her savings toward homeownership, took advantage of Southern’s Volunteer Income Tax Assistance program to have her taxes filed for free, and finally, took homebuyer education courses to prepare for her next step. Today, Angela is a proud homeowner who credits Southern with helping get her financial life on track. In 2014, Southern helped

7,455 people like Angela put their financial life on track through education and savings programs. - 17 -

Southern believes that mission and margin are perfect partners in reaching our goals. This snapshot provides a highlevel glimpse of this work and our impact on our communities. 7,000

409 home loans, 143 of which were first time homebuyers, and 76 new counseling clients.

Empowered 7,455 people to save and build assets through: 3,798 first time savings accounts, 109 new matched savings accounts, completing 2,754 tax returns free of charge resulting in over $6 million in refunds of which over half was in the form of the Earned Income Tax Credit,

and counseling 114 new people in credit reduction and savings.

ASSETS Cash and due from banks

Interest-bearing deposits in other banks

Securities sold under agreements to repurchase

Fees, commissions, and other

Net occupancy and equipment expense Other

Net income in 2013 decreased to $8.7 million from $10.2 million in 2012. However, normalizing the net income by removing one-time gains and expenses like the one-time securities pre-tax gain of $2.6 million realized in 2012 provides a more accurate picture of Southern’s financial performance. Removing such one-time items, Southern’s normalized net income increased by 26% from 2012 to 2013, and it increased by 20% from 2013 to 2014. 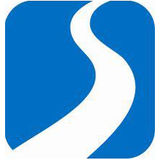