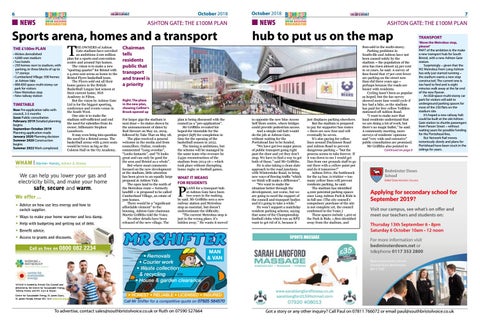 HE OWNERS of Ashton Gate stadium have unveiled an ambitious £100 million plan for a sports and convention centre and around 750 homes. The vision is to make a new “sporting quarter” for Bristol with a 4,000 seat arena as home to the Bristol Flyers basketball team. The Flyers sold out all their home games in the British Basketball League last season at their current home, SGS Academy in Filton. But the vision by Ashton Gate Ltd is for the biggest sporting, conference and events venue in the South West. One aim is to make the stadium self-sufficient and end the need for subsidies from its owner, billionaire Stephen Lansdown. It may even bring into question the need for a Bristol arena. The basketball arena with 4,000 seats would be twice as big as the Colston Hall or the O2 Academy.

We can help you lower your gas and electricity bills, and make your home safe, secure and warm. We offer ...

• Advice on how use less energy and how to switch supplier.

• Ways to make your home warmer and less damp. • Help with budgeting and getting out of debt. • Benefit advice. • Access to grants and discounts. Call us free on 0800

Right: The plaza in the new plan, showing Colliter’s Brook opened up plan is being discussed with the council as a “pre-application”. Mr Griffiths revealed his hoped-for timetable for the project (left) for completion in time for the opening of the basketball season in 2022. The timing is ambitious, but the scheme will be managed by the same team who oversaw he £45m reconstruction of the stadium from 2014-16 – which took place without disrupting home rugby or football games.

WHAT IT MEANS FOR RESIDENTS

LANS for a transport hub at Ashton Gate have been two years in the making, he said. Mr Griffiths sees a new railway station and Metrobus stop as essential, but doesn’t underestimate the difficulty. “The current Metrobus stop is just in the wrong place, it’s hidden away.” He wants it moved

to opposite the new blue Access Self Store centre, where bridges could provide pedestrian access. And a simple rail halt would do the job at Ashton Gate, without waiting for the Portishead line to be funded. “We have got two major pieces of public transport going right past the door and yet they don’t stop. We have to find a way to get both of those,” said Mr Griffiths. He is also taking a clean slate approach to the road junctions with Winterstoke Road, to bring new ways of flowing traffic “which we think will make a difference”. “We want to make the situation better through the development, not worse, but we are going to need the support of the council and transport bodies and it’s going to take a while.” He won’t support a matchday resident parking scheme, saying that some of the Championship football clubs which run an RPZ want to get rid of it, because it

just displaces parking elsewhere. But the stadium is prepared to pay for supporter bus routes – there are now four and will eventually be seven. It’s also paying for yellow lines around Duckmoor Road and Ashton Road to prevent dangerous parking – “but the process seems to take forever. If it was down to me I would get Dan from our grounds staff to go out there with a yellow paint pot and do it tomorrow!” Ashton Drive, the bottleneck for the 24 bus, is trickier – too many yellow lines will prevent residents parking, he said. The stadium has identified 4,000 potential parking spaces once Long Ashton Park & Ride is in full use. (The city council’s compulsory purchase of the site is not complete yet, the council confirmed to the Voice.) These spaces include 1,400 at the Park & Ride, 1,800 identified away from the stadium, and

800-odd in the multi-storey. Parking problems in Southville and Ashton have not been caused solely by the stadium – the population of the area has risen almost 25 per cent in 10 years, he said. A survey of fans found that 17 per cent fewer are parking on the street now than did three years ago – perhaps because the roads are busier with residents. Cycling hasn’t been as popular as hoped, but the fan survey showed more fans would cycle if hey had a bike, so the stadium has paid for free yellow YoBikes stationed off Ashton Road. “I want to make sure that local residents understand that we are doing a lot of work, but there’s no magic bullet,” he said. A community meeting, more surveys of residents’ opinions and “very wide and extensive” public consultation are promised. Mr Griffiths also pointed to Continued on page 8

TRANSPORT ‘Move the Metrobus stop, please!’ PART of the ambition is the make a new transport hub for South Bristol, with a new Ashton Gate station. Surprisingly – given that the M2 Metrobus from Long Ashton has only just started running – the stadium wants a new stop constructed. The current one is too hard to find and is eight minutes walk away at the far end of the new flyover. An 850-space multi-storey car park for visitors will add to underground parking spaces for most of the 250 flats on the stadium site. It’s hoped a new railway halt could be built at the old Ashton Gate station to shuttle passengers from Parson Street – without waiting years for possible funding for the Portishead line. But Network Rail moves notoriously slowly and plans for Portishead have been stuck in the sidings for years.

EVENINGS FROM 5PM TILL 8PM

hub to put us on the map

Chairman tells residents public that transport and travel is a priority

For larger gigs the stadium is next door – its status shown by the announcement of dates by Rod Stewart on May 22, 2019, followed by Take That on May 28. The plan received a general welcome in the media and from councillors. Online, residents commented “Long overdue”, “Looks fantastic”, and “It looks great and can only be good for the area and Bristol as a whole”. But where most comments focused on the new development at the stadium, little attention has been given to an equally large proposal at Ashton Vale. The open land to the north of the Metrobus route – formerly landfill – is proposed to be called Cumberland Village, an estate of 500 homes. There would be a “significant affordable element” to the housing, Ashton Gate chairman Martin Griffiths told the Voice. No other details have been released of the new village. The