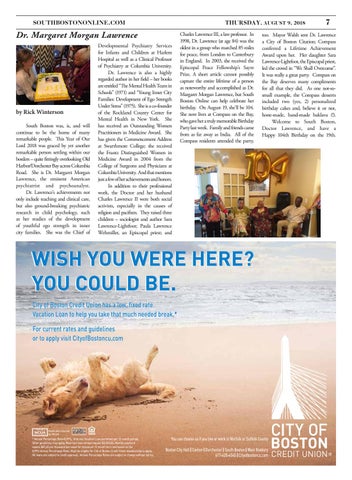 by Rick Winterson South Boston was, is, and will continue to be the home of many remarkable people. This Year of Our Lord 2018 was graced by yet another remarkable person settling within our borders – quite fittingly overlooking Old Harbor/Dorchester Bay across Columbia Road. She is Dr. Margaret Morgan Lawrence, the eminent American psychiatrist and psychoanalyst. Dr. Lawrence’s achievements not only include teaching and clinical care, but also ground-breaking psychiatric research in child psychology, such as her studies of the development of youthful ego strength in inner city families. She was the Chief of

Developmental Psychiatry Services for Infants and Children at Harlem Hospital as well as a Clinical Professor of Psychiatry at Columbia University. Dr. Lawrence is also a highly regarded author in her field – her books are entitled “The Mental Health Team in Schools” (1971) and “Young Inner City Families: Development of Ego Strength Under Stress” (1975). She is a co-founder of the Rockland County Center for Mental Health in New York. She has received an Outstanding Women Practitioners in Medicine Award. She has given the Commencement Address at Swarthmore College; she received the Frantz Distinguished Women in Medicine Award in 2004 from the College of Surgeons and Physicians at Columbia University. And that mentions just a few of her achievements and honors. In addition to their professional work, the Doctor and her husband Charles Lawrence II were both social activists, especially in the causes of religion and pacifism. They raised three children – sociologist and author Sara Lawrence-Lightfoot; Paula Lawrence Wehmiller, an Episcopal priest; and

Charles Lawrence III, a law professor. In 1998, Dr. Lawrence (at age 84) was the oldest in a group who marched 85 miles for peace, from London to Canterbury in England. In 2003, she received the Episcopal Peace Fellowship’s Sayre Prize. A short article cannot possibly capture the entire lifetime of a person as noteworthy and accomplished as Dr. Margaret Morgan Lawrence, but South Boston Online can help celebrate her birthday. On August 19, she’ll be 104. She now lives at Compass on the Bay, who gave her a truly memorable Birthday Party last week. Family and friends came from as far away as India. All of the Compass residents attended the party,

too. Mayor Walsh sent Dr. Lawrence a City of Boston Citation; Compass conferred a Lifetime Achievement Award upon her. Her daughter Sara Lawrence-Lightfoot, the Episcopal priest, led the crowd in “We Shall Overcome”. It was really a great party. Compass on the Bay deserves many compliments for all that they did. As one not-sosmall example, the Compass desserts included two (yes, 2) personalized birthday cakes and, believe it or not, hone-made, hand-made baklava (!). Welcome to South Boston, Doctor Lawrence, and have a Happy 104th Birthday on the 19th.