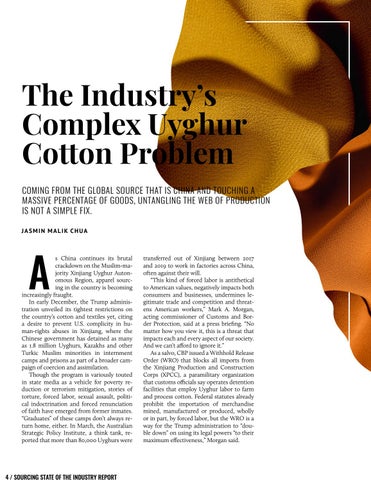 The Industry’s Complex Uyghur Cotton Problem COMING FROM THE GLOBAL SOURCE THAT IS CHINA AND TOUCHING A MASSIVE PERCENTAGE OF GOODS, UNTANGLING THE WEB OF PRODUCTION IS NOT A SIMPLE FIX. JASMIN MALIK CHUA

s China continues its brutal crackdown on the Muslim-majority Xinjiang Uyghur Autonomous Region, apparel sourcing in the country is becoming increasingly fraught. In early December, the Trump administration unveiled its tightest restrictions on the country’s cotton and textiles yet, citing a desire to prevent U.S. complicity in human-rights abuses in Xinjiang, where the Chinese government has detained as many as 1.8 million Uyghurs, Kazakhs and other Turkic Muslim minorities in internment camps and prisons as part of a broader campaign of coercion and assimilation. Though the program is variously touted in state media as a vehicle for poverty reduction or terrorism mitigation, stories of torture, forced labor, sexual assault, political indoctrination and forced renunciation of faith have emerged from former inmates. “Graduates” of these camps don’t always return home, either. In March, the Australian Strategic Policy Institute, a think tank, reported that more than 80,000 Uyghurs were

4 / SOURCING STATE OF THE INDUSTRY REPORT

transferred out of Xinjiang between 2017 and 2019 to work in factories across China, often against their will. “This kind of forced labor is antithetical to American values, negatively impacts both consumers and businesses, undermines legitimate trade and competition and threatens American workers,” Mark A. Morgan, acting commissioner of Customs and Border Protection, said at a press briefing. “No matter how you view it, this is a threat that impacts each and every aspect of our society. And we can’t afford to ignore it.” As a salvo, CBP issued a Withhold Release Order (WRO) that blocks all imports from the Xinjiang Production and Construction Corps (XPCC), a paramilitary organization that customs officials say operates detention facilities that employ Uyghur labor to farm and process cotton. Federal statutes already prohibit the importation of merchandise mined, manufactured or produced, wholly or in part, by forced labor, but the WRO is a way for the Trump administration to “double down” on using its legal powers “to their maximum effectiveness,” Morgan said.