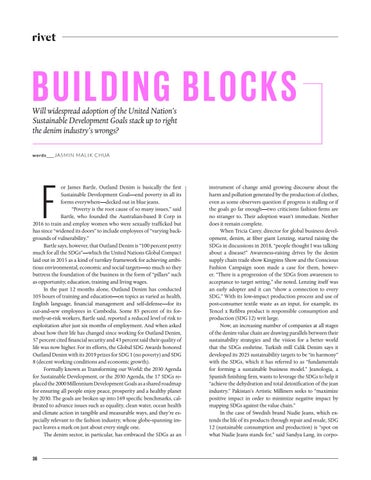 or James Bartle, Outland Denim is basically the first Sustainable Development Goal—end poverty in all its forms everywhere—decked out in blue jeans. “Poverty is the root cause of so many issues,” said Bartle, who founded the Australian-based B Corp in 2016 to train and employ women who were sexually trafficked but has since “widened its doors” to include employees of “varying backgrounds of vulnerability.” Bartle says, however, that Outland Denim is “100 percent pretty much for all the SDGs”—which the United Nations Global Compact laid out in 2015 as a kind of turnkey framework for achieving ambitious environmental, economic and social targets—so much so they buttress the foundation of the business in the form of “pillars” such as opportunity, education, training and living wages. In the past 12 months alone, Outland Denim has conducted 105 hours of training and education—on topics as varied as health, English language, financial management and self-defense—for its cut-and-sew employees in Cambodia. Some 85 percent of its formerly-at-risk workers, Bartle said, reported a reduced level of risk to exploitation after just six months of employment. And when asked about how their life has changed since working for Outland Denim, 57 percent cited financial security and 43 percent said their quality of life was now higher. For its efforts, the Global SDG Awards honored Outland Denim with its 2019 prizes for SDG 1 (no poverty) and SDG 8 (decent working conditions and economic growth). Formally known as Transforming our World: the 2030 Agenda for Sustainable Development, or the 2030 Agenda, the 17 SDGs replaced the 2000 Millennium Development Goals as a shared roadmap for ensuring all people enjoy peace, prosperity and a healthy planet by 2030. The goals are broken up into 169 specific benchmarks, calibrated to advance issues such as equality, clean water, ocean health and climate action in tangible and measurable ways, and they’re especially relevant to the fashion industry, whose globe-spanning impact leaves a mark on just about every single one. The denim sector, in particular, has embraced the SDGs as an

instrument of change amid growing discourse about the harm and pollution generated by the production of clothes, even as some observers question if progress is stalling or if the goals go far enough—two criticisms fashion firms are no stranger to. Their adoption wasn’t immediate. Neither does it remain complete. When Tricia Carey, director for global business development, denim, at fiber giant Lenzing, started raising the SDGs in discussions in 2018, “people thought I was talking about a disease!” Awareness-raising drives by the denim supply chain trade show Kingpins Show and the Conscious Fashion Campaign soon made a case for them, however. “There is a progression of the SDGs from awareness to acceptance to target setting,” she noted. Lenzing itself was an early adopter and it can “show a connection to every SDG.” With its low-impact production process and use of post-consumer textile waste as an input, for example, its Tencel x Refibra product is responsible consumption and production (SDG 12) writ large. Now, an increasing number of companies at all stages of the denim value chain are drawing parallels between their sustainability strategies and the vision for a better world that the SDGs enshrine. Turkish mill Calik Denim says it developed its 2025 sustainability targets to be “in harmony” with the SDGs, which it has referred to as “fundamentals for forming a sustainable business model.” Jeanologia, a Spanish finishing firm, wants to leverage the SDGs to help it “achieve the dehydration and total detoxification of the jean industry.” Pakistan’s Artistic Milliners seeks to “maximize positive impact in order to minimize negative impact by mapping SDGs against the value chain.” In the case of Swedish brand Nudie Jeans, which extends the life of its products through repair and resale, SDG 12 (sustainable consumption and production) is “spot on what Nudie Jeans stands for,” said Sandya Lang, its corpo-

The global denim industry is plotting its circular future. Despite a pandemic wreaking havoc on business, industry players introduced biodegradable stretch jeans, Cradle to Cradle certified platinum denim fabrics, jeans made entirely of recycled content and jeans that can be traced back to the cotton farm.