The conceptual problems of the Curatorial Process in Music today, and the Method of Collective Reson 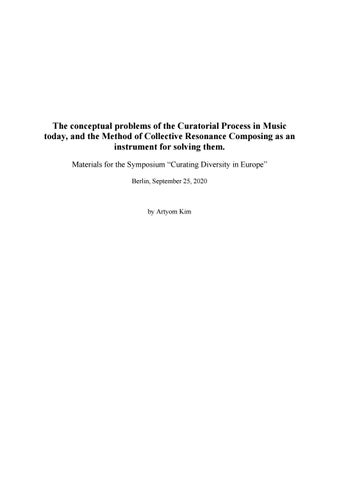 The conceptual problems of the Curatorial Process in Music today, and the Method of Collective Resonance Composing as an instrument for solving them. Materials for the Symposium â&amp;#x20AC;&amp;#x153;Curating Diversity in Europeâ&amp;#x20AC;? Berlin, September 25, 2020

The conceptual problems of the Curatorial Process in Music today, and the Method of Collective Resonance Composing as an instrument for solving them. Materials for the Symposium Curating Diversity in Europe , Berlin, September 25, 2020

by Artyom Kim Serious problem in the decision-making strategies in the field of contemporary music is in the certain inertness, secondariness in relation to the social, political and economical ce e . I f he ca e he ic f c i a ie a e - eac i g to the global problems instead of to prognosticate them. The uniqueness of today, contrariwise, is in the fact that musicians can articulate the most important questions for scientists and politics and to shape a way for future development. Only on-terms of having such ambitious concept in the basis, we can debate upon the mission of music today, and search for the effective strategies of realization this mission through the curatorial processes. This paper describes some of these concepts and strategies. It has been immerged historically, starting from the second half of XX century till now, that the curatorial process on its every stage, such as: collecting information analysis generating variants of decision selecting one optimal decision from many possible implementing this decision was guided by the subjective artistic visions of one or few experts, and that the fundamental concept was the ambition to present the endless diversity of these visions. Such concept can be effective until there is a global mission in depth, for example the rebuilding European culture after the Second World War. Otherwise, if there is no global mission, or one, which is inadequate anymore, the concept of endless diversity becomes the goal by itself. In this case the system becomes closed, and instead of innovative diversity we get an endless variations within the complex of the same elements, without appearance of any new element in this complex. To avoid this negative scenario, we have to articulate a global mission of today, and I would put in this place the transition from the EGO-centric model of the creative processes to the collective model; and as the reason for it I would put the acknowledged necessity of the development of the higher forms of intellectual, emotional and spiritual human activities. I h ld be a bjec f ab ac , ic alk . We have to elaborate and to implement some concrete technical tools for the realization of these tasks. Today we are observing the objective process of the quantitative increasing of the elements in the system. It caused by the expansion into the new territories Asia and Middle East. This process creates an illusion of the vivification within the system, but without real qualitative changes in the concept, it is doomed to become obsolete. It can bring to the stagnancy, at first, and then to the collapse. To avoid this we have to articulate certain global idea for innovations in the contemporary music today. If not the one described here, then some other but also clearly articulated. And then it should be consistently and insistently implemented in all aspects of the infrastructural organization of music: from the concepts in education till the strategies for curatorial processes. One of tools of the implementing the new concepts is the Method of Collective Resonance Composing. The Method comes from the idea that any process, the purpose of which is to

come to certain creative decision, is more effective in the situation of collaborative creative work of a team; and that the highest forms of intellect cannot belong to a particular individual, but to the collective. These ideas are to be implemented on each of the phases of the intellectual process from the recognition of a problem until the selection of the final decision. The important distinguishing feature of the Method is the idea that the collaborative process should not be limited by a simple exchange of intellectual information questions, answers, arguments, conclusions, etc. The members of the team during the whole process should stay tuned psycho-energetically onto each other, and their individual neural systems should form a certain Super-system. In this case it is possible not only to come to the best combination of existing ideas, but also to get an access to the principally new ideas, which have been never articulated before. Prepared by the complex of psycho stimulating practices (breathing, muscular stretching, uplifting exercises) and with the use of special technique of mental re-interpreting the ideas, the team-members generate a constant stream of intellectual and emotional signals. These signals, when overlapping onto each other, start to co-resonate and to create a biomagnetic field. Because of this effect of co-resonating, which is a form of the Synergism Phenomenon, the Method is called the Collective Resonance. This bio-magnetic field, in its turn, creates the conditions for getting signals from the Global informational field, which contains principally new information. The Method appeared as the result of the attempts to describe and explain the effects, which the author of this text, being the leader of the ensemble for contemporary music, has observed many times during the rehearsing process. The Omnibus Ensemble from Tashkent, Uzbekistan for many years was a platform for the experiments in various forms of collaborative creative activities: composing, making organizational and artistic decisions, performing, tutoring, and others. In view of this, the Method is not theoretical, but practical. It is also important to mark that the principles of organizing the work in the Omnibus Ensemble are very much connected to those of the mentoring discourses in the Sufi Traditions, in the sense of mental and spiritual tuning the participants onto each other. In addition to this, the Ensemble, in its experiments with different formats of the stage performance, uses the ideas, which come from certain traditional forms of collective creating and performing music in Central Asia. One of them is Bahzm, which in Uzbek means somewhat like an evening, or an artistic party; traditionally, it was a form of making music and poetry within a circle of close friends, where everyone was an active participant, but not a passive observer. The Method of Collective Resonance Composing proposes 2 protocols. The first one organizes the procedure of making an artistic decision; it lists the order of actions and explains the structural functions of the participants. The second protocol is a tool for establishing and then maintaining the necessary bio-energetic conditions for the successful creative process. It is a common strategy in the Eastern spiritual traditions: a simple mechanical performing of certain practices leads to the recognition of their deeper meaning and function, which then leads to the understanding the full message of a spiritual doctrine. In this sense the Method of Collective Resonance Composing brings to the recognition the meaning of being musician and making music: it is in the acquisition of principally new knowledge and sensorial experience, and in the giving to the human race an access to the higher forms of consciousness.

The conceptual problems of the Curatorial Process in Music today, and the Method of Collective Reson

Materials for the Symposium “Curating Diversity in Europe” Berlin, September 25, 2020 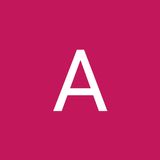