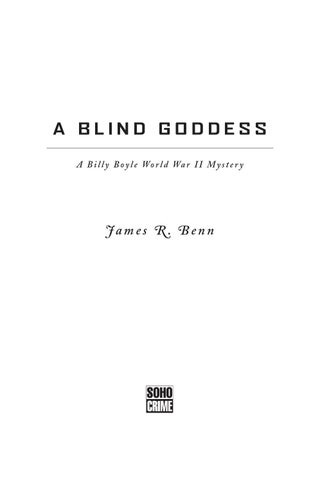 That Justice is a blind goddess Is a thing to which we black are wise: Her bandage hides two festering sores That once perhaps were eyes. â&amp;#x20AC;&amp;#x201D;Langston Hughes, 1923

Tree didn’t speak. He’d look up and meet my eyes for a split second, then lower his gaze and shake his head, as if wondering if this was such a good idea. Given our past, I couldn’t blame him. The pub owner worked his broom, muttering to himself as he swept shards of broken glass across the floor and looked at me with suspicion. I couldn’t fault the barkeep either. A fire burned low in the grate, but not enough to ward off the chill in the air. The Three Crowns Pub was empty except for us and the publican. Me, Kaz, and Tree. Sergeant Eugene “Tree” Jackson, to be precise. I’d brought Kaz along for moral support, so I might as well be precise about his full name as well: Lieutenant Baron Piotr Augustus Kazimierz of the Polish Army in Exile and my good friend. Tree had once been a friend, the kind you get the hard way, by starting off as enemies. Over time we had changed, and found common ground. But then things turned sour, and somehow we ended up back where we started. That was a long time ago, but not the kind of time that heals any wounds. We sat at the table nearest the fire. The pub wasn’t much to begin with and was even less impressive with smashed glassware decorating every surface. Heavy mugs, pint glasses, whiskey tumblers, all reduced to sharp edges and reflected light. Tree didn’t help by playing mute, even though he’d asked for this visit. When we met out front, he’d saluted, since both Kaz and I wore lieutenant’s bars and he had

sergeant’s stripes on his sleeves. Tree addressed me by rank, and thanked us for coming, very stiff and formal. He reminded me of his old man, whom I’d never thought of as anyone but Mr. Jackson. I wondered what he saw in the grown-up Billy Boyle and told myself it didn’t matter. When we entered the Three Crowns, Tree didn’t comment on the destruction. He nodded a greeting to the owner, appearing to be on friendly terms. The publican shook his head sadly, much as Tree was doing, and bent to his broom. There was a lot of glass to be swept. Tree dug a pack of Chesterfields out of his pocket and offered us the smokes. We waved them off and watched as he flipped open a Zippo and lit up. It had been seven years since I’d last seen him, but his hands still looked like a kid’s. Long and slim, just as he was, and graceful too, every move easy and assured. At six feet tall, with hands that could handle a basketball or a football like a pro, he suited the nickname well enough. Having Eugene for a first name didn’t hurt either. He always thought it sounded like a girl’s name, while Tree was unmistakably male. He inhaled the smoke, looking at us both with his dark brown eyes as he exhaled, holding his gaze this time. His skin was a shade lighter than his eyes. The color of polished walnut, I had always thought. “Bet you’re surprised to see me, Billy,” Tree said, finally breaking his silence. He didn’t smile, but one eyebrow arched slightly, a gesture of friendship, perhaps. “Surprised you’re still in the army,” I said, wary of Tree’s intent. Kaz kept silent, his eyes watching the publican as he went about his business, then drifting in Tree’s direction. “You’re Polish,” Tree said to Kaz. He was making small talk that seemed ridiculous in the circumstances. I figured since he wanted to see me, I’d wait until he was ready to spill. Meanwhile, I watched the two of them size each other up. “Yes,” said Kaz. “And I understand you were a colleague of Billy’s in Boston.” “Colleague? I guess you could call it that, Lieutenant. You a

colleague of Billy’s over here now?” There was a challenge in Tree’s words, no matter how lightly he spoke them. Or a warning. “We work together, yes,” Kaz said, with an air of studied indifference. The two of them were a world apart in all things, except for me. Tree was a Negro; tall and good-looking in a Josh Gibson sort of way. Gibson was a six-foot-plus player for the Homestead Grays, and once I’d called him the black Babe Ruth for his incredible hitting. Tree had then called the Babe the white Josh Gibson, and we’d laughed about it. We’d laughed about a lot of things back then. The foolishness of the adult world, mainly. And now here we were smack in the middle of it. My friendship with Kaz was different in many ways. He and I’d had a few laughs, sure, and I’d call him my best friend in a heartbeat, but life these days wasn’t all chuckles and mischief. It was about staying alive, and Kaz and I had helped each other out in that department too many times already. With Tree it had been out-and-out sidesplitting guffaws. With Kaz, it was more likely to be a lopsided grin, a few drinks, and then on to the next mission. Over here, you set aside foolishness pretty damn quick. Small and wiry, sporting steel-rimmed spectacles, Kaz was a good-looking guy himself, if you only looked at one side of his face. On the other side he carried a scar from eye to jawbone, a souvenir from our first case together, and a daily reminder of all he’d lost. I caught Tree staring at it for a second, but he didn’t ask questions. Tree was poor. Kaz was rich. His British Army uniform was tailor-made, and he wore it well. Tree was wearing a Parsons jacket, outdated since the new M-1943 field jackets replaced them months ago. Probably the way things went in the colored units. A lot like life back in Boston. “I thought we might have a drink,” Tree said, drumming his fingers on the tabletop and glancing at the floor. “But there’s a shortage of glasses.” “Listen, Tree,” I said, giving up on waiting for him to explain himself. “I got your message yesterday, and came as soon as I could. I started a five-day leave today and spent my first morning packed

into a train from London to come out here and talk to you. I don’t know what the problem is, but you didn’t invite me for drinks. And what the hell happened here anyway?” “You Yanks happened, that’s what,” the owner said, emptying a dustpan filled with glass shards. “That’s not fair, Horace,” Tree said. “I’m a Yank too.” “Don’t mean your lot,” Horace said. “You know that.” “So there was a brawl or something here,” I said. “Let’s find another pub and have a drink, okay? Maybe that’ll loosen your tongue.” “Don’t bother yourself,” Horace said, and disappeared behind the bar. “What does he mean?” Kaz said. “He means that every damn glass in every damn pub in Hungerford is in the same condition. It wasn’t a brawl. It was a deliberate attack, pure and simple.” “By Americans?” Kaz said. “Yeah,” Tree said. “White Americans.” “I don’t understand,” I said. I could imagine, but I wanted the details. “You know how the army keeps things segregated,” Tree said. “But I’ll explain for your Polish pal here. Uncle Sam’s got colored units, like mine, but that means they have to double up on everything else, to make sure white folks don’t have to share the same building, transportation, food, or anything with us. Trains, ships, trucks, you name it. Even towns. Hungerford was designated an off-duty town for colored troops back in forty-two.” “Why?” Kaz asked. “Women, liquor, politics, it all comes together over here,” Tree said. “Plenty of my fellow American GIs don’t like the idea of seeing us walking out with white girls. Given the lack of female Negroes in England, that’s the only choice we have. And the ladies don’t seem to mind one bit since they weren’t raised to despise my race.” “There would be fights,” Kaz said. “Fights and killing, for certain. You see, over here a white man

doesn’t have the automatic right to kill a Negro, not like they do in the Deep South. Military justice ain’t much, but it’s better than Alabama justice. So to avoid unpleasantness, the army designates certain towns for whites and others for colored troops. Nothing official, of course. But no white GI has ever had a pass to spend time in Hungerford.” Tree spat out the words, and I saw the humiliation beneath his anger. “But your unit did?” “Yeah. First colored troops in the area was a Quartermaster truck company, a few miles west. Then we came along. We’re based outside Hungerford.” Tree lifted his chin as he spoke of his unit, pride evident in how he held himself. No humiliation there. “Let’s get back to what happened here,” I said, anxious to get to the bottom of this. My leave was ticking away, and I had places to go. “Well, the army decided that with so many white troops moving into the area, they needed this town for their leaves. Orders came down yesterday. We get Kintbury, a few miles from here. Real small town, not much to do. White troops get Hungerford, starting midnight tonight.” “Did the colored soldiers break up the pubs because they were angry?” Kaz asked. “Nope. We like the people here. Not a man among us would cause them harm. At noon today three truckloads of white boys drove into town, made for the three pubs, and took baseball bats to the drinking glasses. All of them. Didn’t touch anything else.” “Why?” Kaz asked, wrinkling his brow as he tried to work out the logic of it. This was new territory to him, but all too familiar to me. “So they wouldn’t have to drink from the same glasses as Negroes had,” I said.