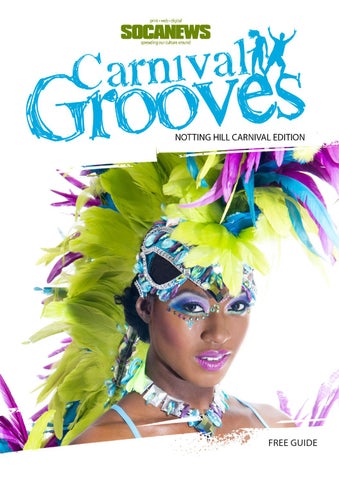 Consulting-Editor Stephen Spark. Layout & Design Joseph Charles. Contributors Natasha Ofosu, Katie Segal, Stephen Spark & Martin Jay. Photographers Stephen Spark. The views expressed in Carnival Grooves are not necessarily the views of the editor or the publisher. All material contained within this publication is the copyright of Carnival Grooves. No material, written or photographic may be reproduced in any way without the written permission of the publisher. No liability will be accepted for any errors which may occur within the magazine. CARNIVAL GROOVES 3

It’s taken a year, but here we are at last – back in Notting Hill. After the hard work, late nights in the panyard, costume crises in the mas camp and heart-pounding anticipation, “we ready for de road”. And if you’re not lucky enough to be ruling the streets of West London for a day as queen or a warrior, a steelpan player or a DJ, you’ll still feel the thrill of being part of something so vast and all-encompassing. This is your carnival too. The excitement builds as you’re on the Tube, because everyone is heading in the same direction. The whistles blow as you tramp down streets filled with people, just people (and the odd police horse), from every corner of the planet. Your nose senses roast chicken and warm spices drifting on the barbecue smoke.

As you get closer to Carnival Central, a deep bass rumble, like the intimation of an earthquake, resolves itself into distinct sounds – drum & bass here, fast-paced soca there, old school reggae and steelpan blending and separating in complex combinations. No wonder this is the music factory of the world, where the sounds of the future are forged.

Finally, you reach the mas (masquerade). It takes a while to adjust to the head-spinning kaleidoscope of colour, for this is “the world turned upside down”, where silk wings and feathered plumes compete for attention with demons and dark-masked nightmares.

Sharp-eyed fashion designers and students of the hip and cool seize on Carnival’s creativity. But this is the people’s catwalk, too, where anyone can be the star of a hundred image-hungry camera lenses, to be Instagrammed around the globe. And when it’s all over, with some rhythm still beating in your head, you’ll resolve that next year you won’t be standing behind the barrier, you’ll be on the road. 4 CARNIVAL GROOVES

PANORAMA Mas (from masquerade) is the soul of Carnival. Whether it’s portraying traditional characters like Midnight Robber and Wild Indian, artistic creations in billowing clouds of silk, or the feathers and beads of the party bands, mas on the move is the difference between a street party and Carnival. Each mas band (costume group) has a theme, developed through different costume designs (‘sections’), plus king and queen costumes. Check the front banner for the band’s name and theme. Carnival rule: never cut into a band – the road belongs to the masqueraders!

In 1966 steelpan turned Notting Hill’s first parade into a Caribbean carnival. You’ll find out why at Panorama, 6 - 10pm, Saturday 29 August at Horniman’s Pleasance, off Kensal Road. It’s a fiercely fought competition between Britain’s best steelbands and the perfect occasion to experience the majesty and subtlety of this extraordinary instrument.

2015 PANORAMA FINALISTS Six bands will compete in the final of this year’s National Panorama competition.

TRANSPORT INFORMATION Ladbroke Grove tube station will be close on Sunday and Monday; other local stations may have limited hours and/or interchanges, or be exit only. Please check socanews. com for more information.

PAINT, POWDER AND PAN Notting Hill? Nah, it’s all police and tourists these days; just jams and barriers. If that’s how you feel, you didn’t get up early enough. Get up early on Sunday morning – or simply don’t bother going to bed the night before – and head for Sainsbury’s roundabout, close to where Ladbroke Grove meets Kensal Road. Here, in the half-light just before 6am, figures shuffle about encased in some kind of biological warfare outfit. Has ebola hit North Kensington? Others gather in conspiratorial huddles, furtively passing round buckets of toxic-looking liquids and bags of deadly powder. Insurrection is at hand… Their presence and purpose become clearer as the first in a convoy of steelband trucks appears and that thrilling ‘ting-ting-ting’ presages a headlong rush into an intoxicating steelpan melody. This is the call to arms: the Revolution starts at dawn! For this is J’Ouvert – ‘jour ouvert’, the opening of day, the herald of Carnival. No barriers, scarcely a policeman in sight, no tourists, just some bleary-eyed locals peering out of windows or watching from the safety of a corner shop. The ring of steel reverberating under Ladbroke Grove railway bridge galvanises the revellers into a frenzy of water-squirting, paint-splattering and powder-throwing. The biohazard suits make sense. You can get the plastic coveralls as part of a J’Ouvert package, but unlike mas on the road, J’Ouvert is free for all to join, so long as you “ain’t fraid ah powder”. It’s messy, fun, liberating and pure niceness, as you chip down the Grove, make a little round and head back to the starting-point sometime before 9am. So share in the true spirit of Carnival (best kept in a hip flask!). J’Ouvert is the place for me!

Children have been at the heart of Notting Hill Carnival since it started. Community worker Rhaune Laslett, credited with founding the event in 1966, was deeply involved in the movement to provide safe play areas in run-down post-war Notting Hill, a place where she said, “Children see very little colour and gaiety”. The 1966 parade started at the Acklam Road Adventure Playground and, the local paper reported, “Children in the area wore fancy dress of International songs and dances”. Notting Hill has changed a lot since then, but children are still central to the celebrations. The freedom to dance in costume down streets normally jammed with traffic is as exciting as it ever was. Many of the mas bands and steel bands have their roots in youth and community associations or church groups. Participating in mas or a steelband builds confidence, teaches responsibility and stimulates artistic expression, and by their early teens some young participants are already carnival veterans. In contrast to the adults’ event, increasingly dominated by productionline skimpy costumes, Children’s Day still focuses on traditional mas. As the carnival and crowds grew it became sensible to separate the children from the adult processions, and Sunday became settled as Children’s Carnival, using a shortened version of the route. Sunday became established as the quieter of the two days, a prelude to the main event on the Bank Holiday. In recent years, Sunday has become as busy as Monday, particularly as stringent time restrictions have compressed activities into fewer hours, exacerbating crowding problems. There are quieter spots away from the route, but if the kids grow restless the solution may be to sign them up for a costume or steelpan lessons next year. After all, taking part is so much more fun than standing behind a barrier!

For most visitors, Monday starts with a walk from the Tube station in the company of a stream of strangers, heading down the arteries that feed the alreadypulsing heart of Carnival. Participants will have arrived hours before, meeting up at a mas camp or panyard in the early morning, then making their way to a temporary base where they’ll change into costumes or set up the pans ready for the road. Stray notes from a steelband warming up mingle with harsher metal clangs and scrapes as council workmen drag those ubiquitous barriers into place. The sound system guys are arranging their towering stacks, fine-tuning equipment to get that perfect sound that will leave their rivals in the cold. On their jealously guarded pitches, food-sellers coax barbecues into life, sending tentative wisps of smoke curling up into the sky. Chat and banter, contemplation, concentration and expectation: it’s the calm before the storm. The pitch increases almost imperceptibly, but there comes a moment when the beast has woken and is at full roar, a totally immersive, heart-thumping, mindscrambling sensory overload of sound, colour, smells and feelings. The bass seems to shake the Earth itself, reverberating off buildings whose bricks and stones and mortar have been subjected to five decades of black musical history – calypso, soca, steelpan, ska, reggae, dub-step, garage, bouyon, zouk, soukous, samba, lambada, ragga, drum’n’bass, jungle, chutney, old-school, new-wave and music so freshly minted it doesn’t even have a name. Round the route circulate, in shimmering shades of fantasy, thousands of ordinary men, women and children transformed for a few glorious hours into warriors and princesses, butterflies and monsters, chiefs, devils, and characters from history, allegory and mystery, leaving in their wake an ephemeral trail of feathers and sequins and glitter. And when the last weary reveller staggers off in search of a night bus home, if you listen carefully you can hear Notting Hill exhale. To sleep, perchance to dream… of Carnival 2016!

During the 1970s the popularity of calypso waned, and what took its place was a more lively, up-tempo kind of music. Soca was influenced by gospel, Indian instruments, funk, African spirituals and reggae. Soca, unlike calypso, is more concerned with people having a good time. The musical lyrics of great artists, such as Ras Shorty Iâ&#x20AC;&#x2122;s Endless Vibrations and Soul of Calypso, helped to make soca music international. He experimented with Indian instruments such as the dhantal, tabla and dholak to belt out the first stream of soca music. In the beginning, like calypso, soca was used to provide social commentary and humour, but soon the more risquĂŠ business of wining and jamming took over the new sound. Many argue that the lyrics of soca are less appealing than its contemporary, calypso, but needless to say it took over the streets and is more widely played now than calypso - except in the calypso tents. In many ways, soca is to calypso what dancehall is to reggae, with the former more about partying and the latter relating to society and its issues. Like all other music, people have experimented with soca over the years to produce hybrids such as ragga soca, chutney soca, rapso and even soca parang.

The following tracks are just some of the top tunes you can expect to hear on the streets for Notting Hill Carnival 2015. Chart by @martinjay. For more music, visit socanews.com/music

You are strongly advised to check with the event promoter, as details sometimes change and cancellations may occur; all information was correct at the time of going to print.

On My Way: Machel Montano Live in concert with full band

daylight: the official after party

Shipwrecked® in India - The Ultimate All Inclusive 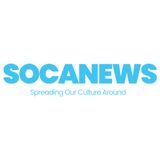