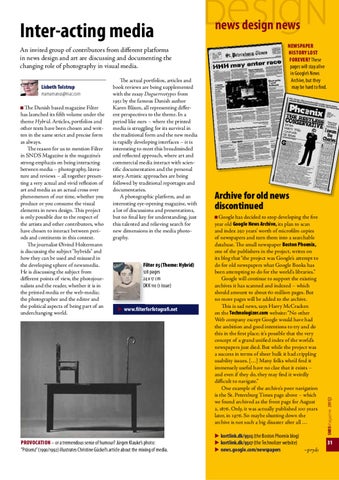 NEWSPAPER HISTORY LOST FOREVER? These pages will stay alive in Google’s News Archive, but they may be hard to find.

An invited group of contributors from diﬀerent platforms in news design and art are discussing and documenting the changing role of photography in visual media. Lisbeth Tolstrup mamamanus@mac.com ■ The

Danish based magazine Filter has launched its ﬁfth volume under the theme Hybrid. Articles, portfolios and other texts have been chosen and written in the same strict and precise form as always. The reason for us to mention Filter in SNDS Magazine is the magazine’s strong emphazis on being interacting between media – photography, literature and reviews – all together presenting a very actual and vivid reﬂexion of art and media as an actual cross over phenomenon of our time, whether you produce or you consume the visual elements in news design. This project is only possible due to the respect of the artists and other contributors, who have chosen to interact between periods and continents in this context. The journalist Øivind Holtermann is discussing the subject ”hybrids” and how they can be used and misused in the developing sphere of newsmedia. He is discussing the subject from diﬀerent points of view, the photojournalists and the reader, whether it is in the printed media or the web-media; the photographer and the editor and the political aspects of being part of an underchanging world.

The actual portfolios, articles and book reviews are being supplemented with the essay Daguerreotypes from 1951 by the famous Danish author Karen Blixen, all representing diﬀerent perspectives to the theme. In a period like ours – where the printed media is struggling for its survival in the traditional form and the new media is rapidly developing interfaces – it is interesting to meet this broadminded and reﬂected approach, where art and commercial media interact with scientiﬁc documentation and the personal story. Artistic approaches are being followed by traditional reportages and documentaries. A photographic platform, and an interesting eye-opening magazine, with a lot of discussions and presentations, but no ﬁnal key for understanding, just this talented and relieving search for new dimensions in the media photography.

PROVOCATION – or a tremendous sense of humour? Jürgen Klauke’s photo: ”Präsenz” (1990/1992) illustrates Christine Gückel’s article about the mixing of media.

decided to stop developing the ﬁve year old Google News Archive, its plan to scan and index 250 years’ worth of microﬁlm copies of newspapers and turn them into a searchable database. The small newspaper Boston Phoenix, one of the publishers in the project, writes on its blog that “the project was Google’s attempt to do for old newspapers what Google Books has been attempting to do for the world’s libraries.” Google will continue to support the existing archives it has scanned and indexed – which should amount to about 60 million pages. But no more pages will be added to the archive. This is sad news, says Harry McCracken on the Technologizer.com website: “No other Web company except Google would have had the ambition and good intentions to try and do this in the ﬁrst place; it’s possible that the very concept of a grand uniﬁed index of the world’s newspapers just died. But while the project was a success in terms of sheer bulk it had crippling usability issues. […] Many folks who’d ﬁnd it immensely useful have no clue that it exists – and even if they do, they may ﬁnd it weirdly diﬃcult to navigate.” One example of the archive’s poor navigation is the St. Petersburg Times page above – which we found archived as the front page for August 2, 1876. Only, it was actually published 100 years later, in 1976. So maybe shutting down the archive is not such a big disaster after all …

SNDS Magazine no. 2, 2011. Reportage from Make a Difference seminar in Stockholm; 25 years of seminars; It's all about ... snow - new magazine concept; SND GLOBAL: Canada and Africa & the Middle East; CARSON and Filter magazines. 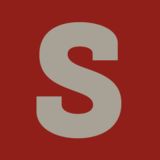