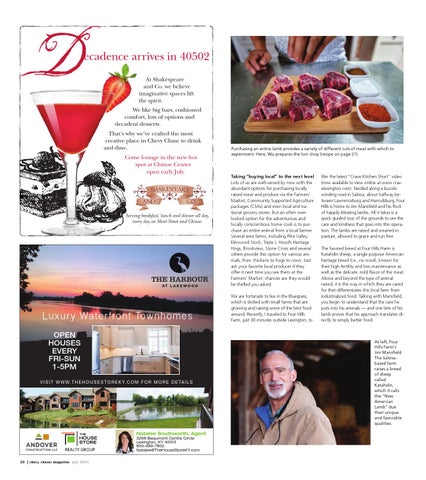 ecadence arrives in 40502 At Shakespeare and Co. we believe imaginative spaces lift the spirit. We like big bars, cushioned comfort, lots of options and decadent desserts. That’s why we’ve crafted the most creative place in Chevy Chase to drink and dine. Come lounge in the new hot spot at Chinoe Center open early July.

Serving breakfast, lunch and dinner all day, every day on Short Street and Chinoe.

Purchasing an entire lamb provides a variety of different cuts of meat with which to experiment. Here, Wu prepares the loin chop (recipe on page 21).

Taking “buying local” to the next level Lots of us are well-versed by now with the abundant options for purchasing locally raised meat and produce via the Farmers’ Market, Community Supported Agriculture packages (CSAs) and even local and national grocery stores. But an often overlooked option for the adventurous and locally conscientious home cook is to purchase an entire animal from a local farmer. Several area farms, including Pike Valley, Elmwood Stock, Triple J, Hood’s Heritage Hogs, Brookview, Stone Cross and several others provide this option for various animals, from chickens to hogs to cows. Just ask your favorite local producer if they offer it next time you see them at the Farmers’ Market; chances are they would be thrilled you asked. We are fortunate to live in the Bluegrass, which is dotted with small farms that are growing and raising some of the best food around. Recently, I traveled to Four Hills Farm, just 30 minutes outside Lexington, to

film the latest “Crave Kitchen Short” video (now available to view online at www.cravelexington.com). Nestled along a bucolic winding road in Salvisa, about halfway between Lawrenceburg and Harrodsburg, Four Hills is home to Jim Mansfield and his flock of happily bleating lambs. All it takes is a quick guided tour of the grounds to see the care and kindness that goes into this operation. The lambs are raised and weaned in pasture, allowed to graze and run free. The favored breed at Four Hills Harm is Katahdin sheep, a single purpose American heritage breed (i.e., no wool), known for their high fertility and low maintenance as well as the delicate, mild flavor of the meat. Above and beyond the type of animal raised, it is the way in which they are cared for that differentiates this local farm from industrialized food. Talking with Mansfield, you begin to understand that the care he puts into his animals –– and one bite of his lamb proves that his approach translates directly to simply better food.

At left, Four Hills Farm&#39;s Jim Mansfield. The Salvisabased farm raises a breed of sheep called Katahdin, which it calls the “New American Lamb” due their unique and favorable qualities. 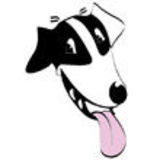