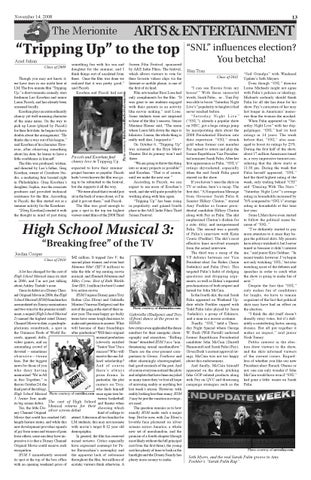 Though you may not know it, we have stars in our midst here at LM. The five-minute film “Tripping Up,” a short romantic comedy, stars freshman Leo Koorhan and senior Laura Piccoli, and has already been screened locally. Koorhan plays an extraordinarily clumsy yet well-meaning character of the same name. On the way to pick up Laura (played by Piccoli) for their first date, he begins to have doubts about the arrangement. “He thinks she is way out of his league,” said Koorhan of his character. However, after observing something about his date, he learns to have a little confidence in himself. The film was produced, written, and directed by Leo’s father, Greg Koorhan, owner of Crossbow Studio, a marketing firm located right in Philadelphia. Greg Koorhan’s daughter, Sophia, was the associate producer and provided technical assistance for the film. According to Piccoli, the film started out as a summer activity for the Koorhans. “[Greg Koorhan] created it with the thought in mind of just doing

something fun with his son and daughter for the summer, and I think things sort of escalated from there. Once the film was done we realized that it was pretty good,” said Piccoli. Koorhan and Piccoli had not

Piccoli and Koorhan find clumsy love in Tripping Up.

expected to have their summer project become so popular. Piccoli hadn’t even known the film was going to be submitted to the festival, but she supports it all the way. “We were afraid that it would just sit in the back of some closet, so I’m glad it got out there,” said Piccoli. The film was good enough to gain a spot in the top ten highest viewer-rated films of the 2008 Third

Screen Film Festival, sponsored by A&amp;E Indie Films. The festival, which allows viewers to vote for their favorite videos clips via the Internet or mobile phone, is one of the first of its kind. Film arts teacher Russ Loue had only compliments for the film. “It was great to see students engaged with their parents in an activity like movie making,” said Loue. Some students were not surprised to hear of the film’s success. Senior Montana Hauser said, “The scene where Laura falls down the steps is hilarious. I mean, the whole thing is really well shot. I enjoyed it.” On October 6, “Tripping Up” was screened at the Bryn Mawr Theater. But its journey won’t end there. “We are going to throw this thing into as many projects as possible!” said Koorhan. “That is of course, until we make the next one.” According to Piccoli, we can expect to see more of Koorhan’s work, and she will quite possibly be working along with him again. “Tripping Up” has been rising in popularity, and gained fourth place in the A&amp;E Indie Films Third Screen Festival.

$42 million. It topped Saw V, the second place winner, and even beat Mamma Mia! ($27.8 million) to A lot has changed for the cast of take the title of top earning movie High School Musical since its start musical, and Hannah Montana and in 2006, and I’m not just talking Miley Cyrus: Best of Both Worlds about Ashley Tisdale’s nose. Tour ($31.1 million) for best G-rated Since its debut as a Disney Chan- live-action movie. nel Original Movie in 2006, the High HSM 3 rejoins Disney gems Troy School Musical (HSM) franchise has Bolton (Zac Efron) and Gabriella accumulated six Emmy nominations Montez (Vanessa Hudgens) and the and two wins for the premier install- rest of the gang at the start of their sement, a sequel (High School Musical nior year. The once happy-go-lucky 2) named the highest rated Disney teens have some tough decisions to Channel Movie to date, a quadruple- make and questions to answer: What platinum soundtrack, a spot in will become of their friendships the Guinness Book of World Re- after graduation? Will their original cords, apparel, dolls, musical production video games, and an (cleverly entitled astounding crowd of “Senior Year”) be a devoted —sometimes success? Who will obsessive—tween receive the one Julfans. But the biggest liard scholarship? news for those of you And of course who deny having there’s always memorized “We’re All prom drama. In in this Together,” is particular, the plot that on October 24, the centers on Troy, final part of the trilogy, who finds himself High School Musical Photo courtesy of corrifox.com once again torn be3: Senior Year, made tween basketball its big screen debut. The cast of High School and theater when Yes, the little Dis- Musical returns for their choosing which silver screen debut. ney Channel Original kind of college to Movie that could has reached full- attend. A decision all too familiar for length feature status, and while this LM students, this may not resonate new development provokes squeals with movie’s target 8-12 year old of joy from some and winces of pain demographic. from others, none can deny how imIn general, the film has received pressive it is that a Disney Channel mixed reviews. Critics especially Original Movie could receive such have expressed contempt for Perecognition. ter Barsocchini’s screenplay and HSM 3 immediately secured the apparent lack of substance its spot at the top of the box office throughout the film, but millions of with an opening weekend gross of ecstatic viewers think otherwise. A Class of 2010

Gabriella (Hudgens) and Troy (Efron) dance at the prom in HSM3.

few critics even applauded the dance numbers for their energetic choreography and execution. “Rolling Stone” described HSM 3 as a “nonthreatening sexual marshmallow.” There are the ever-present comparisons to Grease, Footloose and other charmingly choreographed, feel-good musicals of the past. And of course everyone noticed the plots and subplots that have been recycled so many times they’ve lost all hope of mirroring reality or anything but last week’s sitcom. However, with reality looking less than sunny, HSM 3 may be just the vacation moviegoers need. The question remains as to how exactly HSM made such a major leap. But for now, with Zac Efron’s lovable face plastered on silver screens across America, a whole new set of merchandise, and the promise of a fourth chapter (though most likely without the full principal cast from the first three), the young cast has plenty of time to bask in the limelight and the Disney Family has plenty more money to make.

“I can see Russia from my house!” With these immortal words, Sarah Palin... er... Tina Fey was able to boost “Saturday Night Live’s” popularity to heights it had never reached before. “Saturday Night Live” (“SNL”), already a popular show on NBC, got a huge ratings jump by incorporating skits about the 2008 Presidential Election into their repertoire. “SNL” struck gold when former cast member Fey agreed to return and play the former Republican Vice Presidential nominee Sarah Palin. After her first appearance as Palin, “SNL’s” ratings skyrocketed, especially when the real Sarah Palin guest starred on the show. If you haven’t seen the skits on TV or online, here’s a recap. The first skit, “A Nonpartisan Message from Governor Sarah Palin &amp; Senator Hillary Clinton,” starred Amy Poehler as former presidential candidate Hillary Clinton along with Fey as Palin. The skit emphasized Clinton’s disdain for a cute, ditzy, and inexperienced Palin. The second was a parody of Palin’s interview with Katie Couric (Poehler). The skit’s most effective lines involved excerpts from the actual interview. The third was a recap of the VP debates between our Vice President-elect Joe Biden (Jason Sudeikis) and Palin (Fey). This targeted Palin’s habit of dodging questions and dropping arguments, as well as Biden’s repeated proclamations of both respect and hatred for John McCain. In the fourth skit, the real Sarah Palin appeared on Weekend Update while Poehler rapped with Todd Palin (also played by Jason Sudeikis), a group of Eskimos, and a man in a moose costume. Finally, “SNL” held a Thursday Night Special where George W. Bush (Will Ferrell) endorsed former Republican Presidential candidate John McCain (Darrell Hammond) and Sarah Palin (Fey). Given Bush’s current approval ratings, McCain was not too happy about this endorsement. And finally, McCain himself appeared on the show, pitching fake GOP-related products along with Fey on QVC and discussing campaign strategies such as the

“Sad Grandpa” with Weekend Update’s Seth Meyers. Even though “SNL” director Lorne Michaels might not agree with Palin’s policies or ideology, Michaels certainly should thank Palin for all she has done for his show. Fey’s caricature of her may last longer in Americans’ memories than the woman she mocked. When Palin appeared on “Saturday Night Live” with her doppelgänger, “SNL” had its best ratings in 14 years. The week before that, “SNL” also managed to boost its ratings by 23%. During the first half of the show, about 17 million Americans tuned in, a very impressive turnout considering that the show starts at 11:30 pm. During the week that Palin herself appeared, “SNL” had the third highest rating of the week, only trailing behind “CSI” and “Dancing With The Stars.” “Saturday Night Live”’s average rating in households increased by 76% compared to “SNL’s” average rating in households at this time last year. Some LMers have even started to follow the political scene because of “SNL.” “I’ve definitely started to pay more attention to it since they began the political skits. My parents have always watched it, but I never tuned in because it didn’t interest me,” said junior Kira Goldner. “In recent weeks, however, I’ve begun not only watching ‘SNL,’ but also watching more of the debates and speeches in order to catch what the show is going to make fun of next.” Despite the fact that “SNL” only makes fun of candidates for laughs, we have to remain cognizant of the fact that political skits may have had an effect on the election. “I think the skit itself doesn’t directly sway votes, but it’s definitely a contributing factor, among dozens. But all put together it makes an impact,” said junior Nash Tomey. Public interest in the election drew viewers to the show, and the skits informed viewers of the current issues. Regardless of whether you like our new President-elect Barack Obama or not, one can only wonder if John McCain would have won if “SNL” had gone a little easier on Sarah Palin.