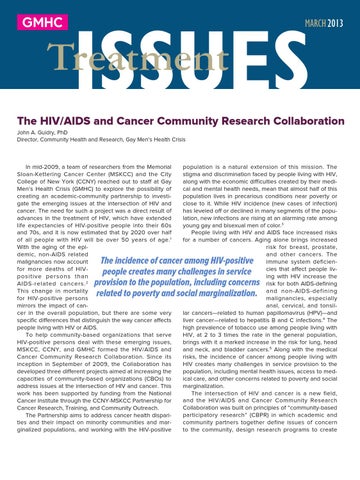 In mid-2009, a team of researchers from the Memorial Sloan-Kettering Cancer Center (MSKCC) and the City College of New York (CCNY) reached out to staff at Gay Men’s Health Crisis (GMHC) to explore the possibility of creating an academic-community partnership to investigate the emerging issues at the intersection of HIV and cancer. The need for such a project was a direct result of advances in the treatment of HIV, which have extended life expectancies of HIV-positive people into their 60s and 70s, and it is now estimated that by 2020 over half of all people with HIV will be over 50 years of age.1 With the aging of the epidemic, non-AIDS related malignancies now account for more deaths of HIVpositive persons than AIDS-related cancers. 2 This change in mortality for HIV-positive persons mirrors the impact of cancer in the overall population, but there are some very speciﬁc differences that distinguish the way cancer affects people living with HIV or AIDS. To help community-based organizations that serve HIV-positive persons deal with these emerging issues, MSKCC, CCNY, and GMHC formed the HIV/AIDS and Cancer Community Research Collaboration. Since its inception in September of 2009, the Collaboration has developed three different projects aimed at increasing the capacities of community-based organizations (CBOs) to address issues at the intersection of HIV and cancer. This work has been supported by funding from the National Cancer Institute through the CCNY-MSKCC Partnership for Cancer Research, Training, and Community Outreach. The Partnership aims to address cancer health disparities and their impact on minority communities and marginalized populations, and working with the HIV-positive

population is a natural extension of this mission. The stigma and discrimination faced by people living with HIV, along with the economic difficulties created by their medical and mental health needs, mean that almost half of this population lives in precarious conditions near poverty or close to it. While HIV incidence (new cases of infection) has leveled off or declined in many segments of the population, new infections are rising at an alarming rate among young gay and bisexual men of color.3 People living with HIV and AIDS face increased risks for a number of cancers. Aging alone brings increased risk for breast, prostate, and other cancers. The immune system deficiencies that affect people living with HIV increase the risk for both AIDS-deﬁning and non-AIDS-defining malignancies, especially anal, cervical, and tonsillar cancers—related to human papillomavirus (HPV)—and liver cancer—related to hepatitis B and C infections.4 The high prevalence of tobacco use among people living with HIV, at 2 to 3 times the rate in the general population, brings with it a marked increase in the risk for lung, head and neck, and bladder cancers.5 Along with the medical risks, the incidence of cancer among people living with HIV creates many challenges in service provision to the population, including mental health issues, access to medical care, and other concerns related to poverty and social marginalization. The intersection of HIV and cancer is a new field, and the HIV/AIDS and Cancer Community Research Collaboration was built on principles of “community-based participatory research” (CBPR) in which academic and community partners together define issues of concern to the community, design research programs to create

The incidence of cancer among HIV-positive people creates many challenges in service provision to the population, including concerns related to poverty and social marginalization.