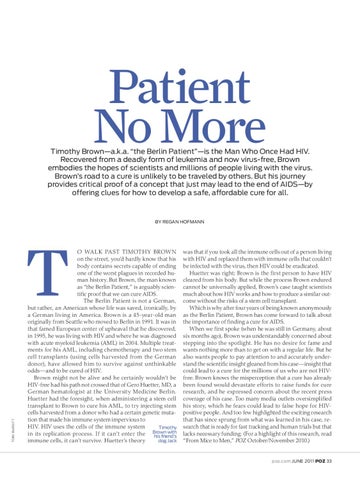 Timothy Brown—a.k.a. “the Berlin Patient”—is the Man Who Once Had HIV. Recovered from a deadly form of leukemia and now virus-free, Brown embodies the hopes of scientists and millions of people living with the virus. Brown’s road to a cure is unlikely to be traveled by others. But his journey provides critical proof of a concept that just may lead to the end of AIDS—by offering clues for how to develop a safe, affordable cure for all.

O WALK PAST TIMOTHY BROWN on the street, you’d hardly know that his body contains secrets capable of ending one of the worst plagues in recorded human history. But Brown, the man known as “the Berlin Patient,” is arguably scientific proof that we can cure AIDS. The Berlin Patient is not a German, but rather, an American whose life was saved, ironically, by a German living in America. Brown is a 45-year-old man originally from Seattle who moved to Berlin in 1991. It was in that famed European center of upheaval that he discovered, in 1995, he was living with HIV and where he was diagnosed with acute myeloid leukemia (AML) in 2004. Multiple treatments for his AML, including chemotherapy and two stem cell transplants (using cells harvested from the German donor), have allowed him to survive against unthinkable odds—and to be cured of HIV. Brown might not be alive and he certainly wouldn’t be HIV-free had his path not crossed that of Gero Huetter, MD, a German hematologist at the University Medicine Berlin. Huetter had the foresight, when administering a stem cell transplant to Brown to cure his AML, to try injecting stem cells harvested from a donor who had a certain genetic mutation that made his immune system impervious to HIV. HIV uses the cells of the immune system Timothy with in its replication process. If it can’t enter the Brown his friend’s immune cells, it can’t survive. Huetter’s theory dog Jack

was that if you took all the immune cells out of a person living with HIV and replaced them with immune cells that couldn’t be infected with the virus, then HIV could be eradicated. Huetter was right; Brown is the first person to have HIV cleared from his body. But while the process Brown endured cannot be universally applied, Brown’s case taught scientists much about how HIV works and how to produce a similar outcome without the risks of a stem cell transplant. Which is why after four years of being known anonymously as the Berlin Patient, Brown has come forward to talk about the importance of finding a cure for AIDS. When we first spoke (when he was still in Germany, about six months ago), Brown was understandably concerned about stepping into the spotlight. He has no desire for fame and wants nothing more than to get on with a regular life. But he also wants people to pay attention to and accurately understand the scientific insight gleaned from his case—insight that could lead to a cure for the millions of us who are not HIVfree. Brown knows the misperception that a cure has already been found would devastate efforts to raise funds for cure research, and he expressed concern about the recent press coverage of his case. Too many media outlets oversimplified his story, which he fears could lead to false hope for HIVpositive people. And too few highlighted the exciting research that has since sprung from what was learned in his case, research that is ready for fast tracking and human trials but that lacks necessary funding. (For a highlight of this research, read “From Mice to Men,” POZ October/November 2010.)