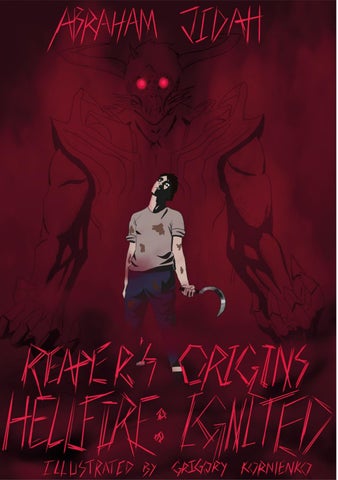 Reaperâ&#x20AC;&#x2122;s origins I Hellfire: Ignited This story takes place in a world where two powerful clans. The Demon Empire, with The Demon Emperor as their leader, and The Divine Kingdom, with The Divine King as their leader, were engaged in a raging war against each other. This caused a rain of pain, destruction and agony over another world, the world of the humans, formerly known as Terra. However the planet is now being used as a place where both clans throw away their scraps, criminals and traitors, as well as it still acts as the no man's land. This has given a new name to this once beautiful world, a name that would scare every citizen of the clans into obedience. This world is now called Exile. This is the origin story of The Crimson Reaper, Raze. Before all the hatred, before all the killing, before the use of his powerful scythe, and back when he had another name. Back then he was a normal human boy, who lived happily in a small

town that was almost completely cut off from the rest of the world. His name was Nihilanth 'N' Spirit.

Prologue I 1 The war has been going on for over a century now, the world has now seen the true colors of both sides now. Or at least they have had the time for it. I have been around for millenia, yet I have not once in my entire life reached my desired goal, it is the same goal as every ruler in any world, world conquest. I am the perfect manifestation of a conqueror. If that was not the case then I would not have the power that I posses right now. For unlike some people in this world, my world and the other one, I was never born a powerful person. I was born a weakling, a good for nothing bastard and an outcast. Everything I have now I had to earn. I had to fight, steal and kill without mercy or compassion for others. But now I am here, and I will do my predecessor one better by doing the one thing that he could not during his time. I am going to patrol my armies around this entire world, and every other. With that I am going to be the one and only supreme leader of

all existence. But in order to reach that goal, I have to win the war by destroying my enemy. That is why I am here. “Sire!” I heard a voice shout through the trees behind me, as it slowly approached and got closer. “Yes, what is it.” I responded without turning around to face the man. “Forgive me for disturbing you. But it’s finished.” He said, this time he was standing still. “Is it really finished already? Very well, you’re forgiven for the disturbance. Now, I shall go and see it for myself. Would you mind accompanying me?” I said, as I turned around and slowly walked towards the trees that the man had come from. The man was no ordinary one, he had a lion’s tail sticking out of his back, and lion ears sticking out of the top of his head. He was yet to have a lion’s mane, that would not show properly until he had finished his trial. As I walked towards him, he responded with. “I would be honored to do so, my Emperor.” He said.

After a short walk through the large trees, we arrived at our destination. A large lake with growing grass, tall trees, boulders and piles of rocks around it. Not far from the lake was the bottom of the cliff that I had been staring from recently. This is where my tool for success would manifest, if done properly of course. I walked over to the water and dipped my hands into it. There was a burning sensation of pure chaos and rage. It is exactly what I was hoping for. “You have done a fine work my friend. Of course I expected no less from you.” I said, while smiling and looking at the lion man. “It was my pleasure sire. I’m honored to serve you.” He said while bowing forward. “You’re as loyal as ever. I’ll be sure to reward you handsomely.” I said, with another smile. “I’m very grateful to you sire... I hope that you don’t mind me asking, but... What is all of this for exactly?” He said while having his arm over his

chest. If you looked closely you would notice his tail wagging and his ears twitching. “Oh this is all for world conquest, my friend.” I said with a melody. “Yes, I know that. But how exactly?” He asked. “Well, let me ask you this. Who is it that truly participate and win wars?” I said. “Well sire, the soldiers do.” He answered, and he was correct. “Indeed. So if soldiers win wars, then we need ours to be stronger than every other. We also need an expendable amount of them. What we have done here is making sure that there will be more demons like us.” I said. The lion man’s eyes opened wide. “I see, this lake slowly but certainly turns everything it comes in contact with into a demon. It even has a greater effect on humans.” He said. He now understands what my plan was. “Yes. The humans will be turned into demons, and thus The Divine will run in and try to kill them.