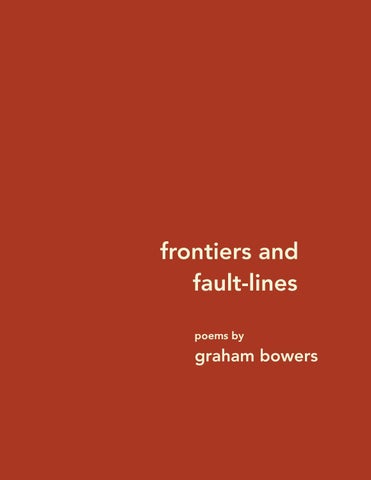 frontiers and fault-lines poems by

If we could get the hang of it entirely It would take too long; All we know is the splash of words in passing And falling twigs of song Louis MacNeice

When the rain Lightweight The ďŹ nal third Advice from my philosophical friend (when we were younger) Me and Walt The thing with life Natural laws Time to think Cohesion testing What happens Spring in spite â&#x20AC;&#x201C; a curmudgeon's song In and of itself A colloquy: four voices Paper chain All there is to say now Out of the hoop Wishful thinking Insecure Genes (or DNA: a Sartrian riposte) I wish I was a pachyderm Processes of the blood Wings, trumpets, etcetera In October

Ducks and drakes When we were children on our summer holidays we'd go down to the River Tees to scramble on the rocks, scoop for minnows and bullheads in home-made nets, and skim stones, trying to get them over from our side – Durham – into Yorkshire. The rear-view-mirroring strangeness of being so much older now: eyeing, though front to back, the disparate pieces tiled into the mosaic, and the crumbling cracks between which separate and ﬁx. Some stones simply broke the surface and dropped without grace, swallowed at once by the gurgle, drag and ﬂow. Some were well-enough chosen, well-enough thrown, to skim and skip, looking like joy heading for freedom, to skate and lift before being lost to view. And now I'm on the other side of all the years – of all they've held and all they haven't held, and I wonder, did I get myself across.

The quiet life I was staring at this piece of paper, and the piece of paper was staring back, going, "Here I am, white and empty, so go on, show me the colour of your black." But I looked at it in a spirit of refusal; if nothing needed saying, why then write? The whiteness kept on trying to taunt me, and I kept trying to keep out of the ďŹ ght. You might think in the end the paper won when it forced these graphite scratchings into sight. But all those quiet gaps between the shapes and round the edges, where it's still: the black is often just encroachment on the white. We similarly think life's what gets done, and view the non-doing lacunae as fallow space. But our senses are beguiled by fuss and facts and footprints are a ďŹ&#x201A;at and narrow trace: what someone is is in between the acts.

As we tack through the world in our several habits, perhaps we would be better off not trying to hem each other in. Best to accept though we hope, we don't know if our disguises are good. (from Interface) Perhaps all poetry is about the attempt to look at life in ways which seek to balance the claims of 'eye and heart and mind'. The pieces in this new collection go about that attempt in ways which vary widely in terms of subject and technique, while at the same time being united by the poet's characteristic clarity and attentive craftsmanship. A number of the poems dig into the questions of interfaces, frontiers and fault-lines – our senses of individual, social and national identity and community, and how our cross-cutting allegiances can both enrich our interactions and wrong-foot us as we try to negotiate the border zones. The poems range from the timeless matters of our intimate, emotional life – 'realm of primal foam and fizz' – to the ways in which the globalised age pushes into relief how our multiple belongings affect and are affected by our struggles to find ways of living that respect human dignity and the natural world.

Graham Bowers was born in Shropshire, and lives in Sweden.