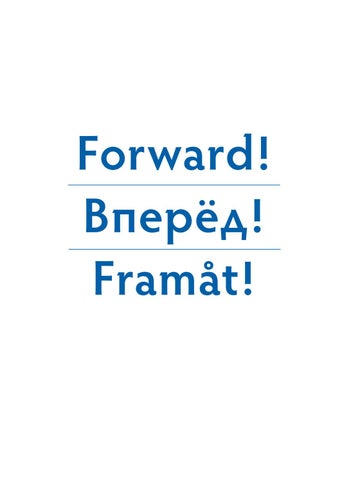 Essays in Honour of Prof Dr

In August 2019 our dear friend and colleague Professor Dr Kaj Hobér retires from his position as Professor of International Investment and Trade Law at the Faculty of Law at Uppsala University. In order to honour Kaj’s extensive commitment to academia and his successful career as a lawyer and partner of Mannheimer Swartling, a group of friends and colleagues have come together to present this collection of essays. The editorial committee has been composed of the undersigned, with Victoria Bùi serving as editorial secretary. Forward! – Bперёд! – Framåt!, the title of this book, is Kaj’s motto in English, Russian and Swedish, respectively. This motto is felicitous indeed. Kaj has a lengthy and successful international career in law. His legacy ranges from international commercial and investment treaty arbitration to Russian studies. Many of us have had the opportunity and pleasure to work with and learn from Kaj. In 2012, Kaj was appointed by nomination as Professor of International Investment and Trade Law at Uppsala University. By Kaj’s return to his alma mater, the circle was closed. After Kaj’s many years as a first-class international arbitration lawyer, being generally considered as one of the true greats of his generation, his colleagues and students at the university have had the immense fortune to benefit from everything that Kaj has had to offer as a faculty member. Kaj has founded and for several years been the director of an international master’s program in investment treaty arbitration at the Faculty of Law at

Editors’ Preface Uppsala University. Needless to say, his reputation precedes him and he has over the years attracted many bright students from all over the world to the Faculty. Besides his teachings in international investment and arbitration law, Kaj has initiated and taught courses in Russian law. In his imperative effort to enhance and promote Russian studies, Kaj launched the Uppsala Yearbook of Eurasian Studies in 2016, as well as its forerunner, the Uppsala Yearbook of East European Law in 2003. Kaj is unique in many ways. Few have the ability, strength and motivation to entertain two demanding professions – that of a highly thriving practicing arbitration lawyer and partner, and that of a university professor. Kaj’s impressive list of publications reflects his wide and profound expertise in Russian law, international arbitration, and trade law. He has published in Swedish, Russian, English and German. His books are frequently relied upon by practitioners and students alike. No doubt Kaj will continue to be active in both academia and the arbitration community for years to come. The editors would like to extend their sincere gratitude to Victoria Bùi, student amanuensis Amalia Ydrefelt Hanell, Olof Blixt and Ronja Österud, and to Iustus, especially Pia Wahren, and eddy.se, especially Jenny Norden­ ankar, who have all been essential in the process of finalizing this collection of essays in honour of Professor Dr Kaj Hobér.  Eric Bylander Anna Jonsson Cornell Jakob Ragnwaldh Uppsala July 9, 2019

Foreword 9 Charles N Brower and Daae Kim Kaj Hobér and Stockholm. Ensuring that East and West Ever Shall Meet

Kristoffer Löf A Story of Corruption. A Case Study of How Bribery Affects the Validity of Performed Commercial Contracts

Patrik Schöldström Massive Evidence in Arbitration. A Case with Food for Thought

Eva Storskrubb Navigating EU Law and the Law of Arbitration. From the Horizon of Commercial Arbitration in Sweden

Maria Berg Andersson Bibliography of the Writings of Kaj Hobér. 1978–2019

Essays in Honour of Prof Dr