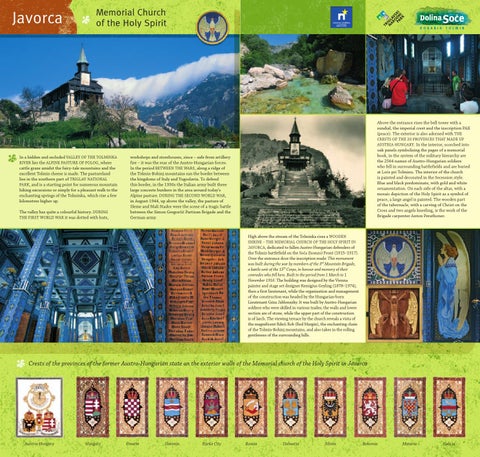 Memorial Church of the Holy Spirit

Above the entrance rises the bell tower with a sundial, the imperial crest and the inscription PAX (peace). The exterior is also adorned with THE CRESTS OF THE 20 PROVINCES THAT MADE UP AUSTRIA-HUNGARY. In the interior, scorched into

In a hidden and secluded VALLEY OF THE TOLMINKA RIVER lies the ALPINE PASTURE OF POLOG, where cattle graze amidst the fairy-tale mountains and the excellent Tolmin cheese is made. The pastureland lies in the southern part of TRIGLAV NATIONAL PARK, and is a starting point for numerous mountain hiking excursions or simply for a pleasant walk to the enchanting springs of the Tolminka, which rise a few kilometres higher up. The valley has quite a colourful history. DURING THE FIRST WORLD WAR it was dotted with huts,

oak panels symbolising the pages of a memorial book, in the system of the military hierarchy are the 2564 names of Austro-Hungarian soldiers who fell in surrounding battlefields and are buried at Loče pri Tolminu. The interior of the church is painted and decorated in the Secession style. Blue and black predominate, with gold and white ornamentation. On each side of the altar, with a mosaic depiction of the Holy Spirit as a symbol of peace, a large angel is painted. The wooden part of the tabernacle, with a carving of Christ on the Cross and two angels kneeling, is the work of the Brigade carpenter Anton Perathoner.

workshops and storehouses, since – safe from artillery fire – it was the rear of the Austro-Hungarian forces. In the period BETWEEN THE WARS, along a ridge of the Tolmin-Bohinj mountains ran the border between the kingdoms of Italy and Yugoslavia. To defend this border, in the 1930s the Italian army built three large concrete bunkers in the area around today’s Alpine pasture. DURING THE SECOND WORLD WAR, in August 1944, up above the valley, the pasture of Sleme and Mali Stador were the scene of a tragic battle between the Simon Gregorčič Partisan Brigade and the German army.

High above the stream of the Tolminka rises a WOODEN SHRINE – THE MEMORIAL CHURCH OF THE HOLY SPIRIT IN JAVORCA, dedicated to fallen Austro-Hungarian defenders of

the Tolmin battlefield on the Soča (Isonzo) Front (1915–1917). Over the entrance door the inscription reads: This monument was built during the war by members of the 3rd Mountain Brigade, a battle unit of the 15th Corps, in honour and memory of their comrades who fell here. Built in the period from 1 March to 1 November 1916. The building was designed by the Vienna painter and stage set designer Remigius Geyling (1878–1974), then a first lieutenant, while the organisation and management of the construction was headed by the Hungarian-born Lieutenant Géza Jablonszky. It was built by Austro-Hungarian soldiers who were skilled in various trades; the walls and lower section are of stone, while the upper part of the construction is of larch. The viewing terrace by the church reveals a vista of the magnificent Rdeči Rob (Red Margin), the enchanting chain of the Tolmin-Bohinj mountains, and also takes in the rolling gentleness of the surrounding hills.

Memorial Church of the Holy Spirit

THE NEARLY 100-YEAR-OLD CHURCH, which is built mainly of

As THE FINEST MONUMENT TO THE FIRST WORLD WAR IN THE TERRITORY OF SLOVENIA, in 2007 the church was classed as a historical monument bearing the EUROPEAN CULTURAL HERITAGE SIGN. The building is owned by the municipality of Tolmin, and is managed by LTO Sotočje. It is also one of the stations along the historical Path of PEACE TRAIL, which links together monuments and remains from the First World War in the upper Soča region.

wood, requires constant maintenance. It has been thoroughly renovated three times. Preserved from the period of the first renovation by Italian troops in 1934 is a panel with the Latin inscription Ultra cineres hostium ira non superest (Wrath does not reach through the ashes of the enemy). After the Second World War, up until the second renovation at the beginning of the 1980s the church became pitifully dilapidated. Following the Easter earthquake in 1998, which permanently marked the entire valley, it was renovated in 2005.

The Church of the Holy Spirit has for many decades PROCLAIMED PEACE. It is noteworthy that still today, in addition to the main Catholic mass on Whit Sunday in May, it also celebrates the Orthodox mass on St. Vitus’s Day. At one time, while war was raging around it, soldiers of various creeds took refuge inside, and for at least a moment they were able to forget here the horrors of war, while today it is visited by PEOPLE FROM ALL OVER THE WORLD.

Rules of conduct in The triglav national park:

• When in Triglav National Park please respect the habits and way of life of people living in it. • Admire the plants, but do not pick them. • Keep quiet and don’t disturb the animals. • Take any rubbish with you before you leave. • Keep dogs on a leash. • Trails in the park are intended for walking Ž bicycling is not allowed. • Follow the markings on poles by the trails. • Park your car in the car park or by the road.

Tip for a hiking tour:

From the Polog Alpine pasture head off along the gravel road to the first junction, where you turn right towards the Prode pasture. By means of the famous “kurukula” make your way across the Tolminka river and cross the Prode pasture. Above the river continue to the Planina pod Osojnico pasture. On the other side, look for the easy mule trail, which takes you back to the starting point (2hr).

For more about the park, www.tnp.si.

High above the stream of the Tolminka rises a wooden shrine – the Memorial Church in Javorca. 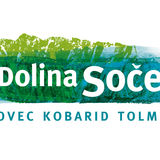