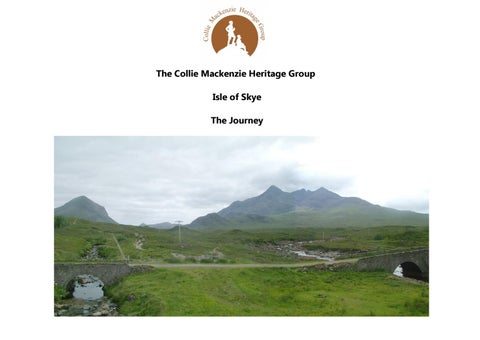 Isle of Skye The Journey

The poles come down

The bronze relief of the Cuillin

The exhibition up and running Pupils work in place

The inspiration The idea for a sculpture for the Isle of Skye started over 10 years ago. The Sconser estate on Skye was bought by The John Muir Trust. The Sconser community were asked by JMT how they would like to celebrate this event, and they chose to remember John MacKenzie, one of their own, who in the early 1880s became the first native Scot to

The inspiration John Mackenzie was a guide and Ghillie for well known mountaineer Norman Collie, and over a period time both men, who were from very different social backgrounds, became great friends.

The Collie Mackenzie Sculpture group was formed in 2004

Local sculptor , Stephen Tinney, after dialogue with the Sconser community, created a maquette of both men

Sharing it with others

The first step was to put our idea to the public. There was a sizeable turnout with many different interests represented, including descendents of John MacKenzie, the local community and the climbing fraternity .

Developing the vision Meeting the stakeholders

The poles come down

The poles were recycled to make a distinctive entrance to the newly created gateway.

The undergrounding of the cables and the launch of the bronze certificates brought interest from the media.

The undergrounding of the cables and the launch of the bronze certificates brought interest from the media.

Gateway to the Cuillin

Three interpretation panels telling the story of the Cuillin and Collie and MacKenzie.

Environmental works The bronze relief of the Cuillin

Looking towards the Cuillin

Looking towards the Telford bridge

Looking back towards the sculpture site

The new stone wall and gateway to the Cuillin

The new pathway with wheelchair access leading to the stone seat

The Educational legacy The opening of the gateway

The Educational legacy Celebration of achievements

The topics researched by each school were : Norman Collie

Geology of the Cuillin

The Educational legacy The pupils work

The Educational legacy The exhibition up and running

Comments from the visitors book

Interior of the shelter showing the three panels

Chair of the group Morag Nicolson said “ All the landscaping and upgrading work at the site has been completed. We’re now at the stage of trying to raise the profile of the sculpture itself and secure the final funding to get it put in place. The idea is to do a mountaineering and heritage festival when the sculpture is unveiled. After that we we would want to see a whole sculpture trail around Skye” “At the moment sites like the Fairy pools and the Old Man of Storr are being saturated with tourists. We need to spread them more around the island.” Excerpt from an article in the Scotland on Sunday 24th July 2016

Appeal to raise funds to build a sculpture of two mountaineering legends The appeal is to raise funds to build a bronze sculpture of Norman Collie and John MacKenzie, two pioneers of the Cuillin on the Isle of Skye, Scotland. Norman Collie was described as one of the four great mountaineers of his time. John MacKenzie is recognised as the first native born British mountain guide. The Sculpture is the final part of works which have been undertaken by the Collie and MacKenzie Heritage Group. Their aims are to improve the area around Sligachan, the Islandâ&amp;#x20AC;&amp;#x2122;s climbing capital, and celebrate the achievements and legacy of both men. Both bronze figures will be one and a half times life size, placed on a natural boulder stack looking towards the mountains they mapped and explored Much has been achieved in the area. All that is needed now is to raise the funds to build the sculpture and complete the project.

FIRST MINISTER OF SCOTLAND I AM PROUD TO OFFER MY FULL SUPPORT TO THE COLLIE AND MACKENZIE HERITAGE PROJECT, WHO ARE CURRENTLY FUNDRAISING AND RAISING AWARENESS TO ERECT A NINE FOOT SCULPTURE AT SLIGACHAN ON THE ISLE OF SKYE. THE SCULPTURE WILL HONOUR SKYE – BORN JOHN MACKENZIE, SCOTLAND’S FIRST MOUNTAIN GUIDE AND HIS CLOSE FRIEND AND CLIMBING COMPANION, THE EXPLORER AND MOUNTAINEER NORMAN COLLIE. THE TWO PIONEERS ARE INTERNATIONALLY RENOWNED FOR THEIR IMPRESSIVE ACHIEVEMENTS SCALING UNEXPLORED AREAS OF SCOTLAND. THESE MEN WOULD HAVE DEMONSTRATED GREAT AMOUNTS OF PHYSICAL AND MENTAL STRENGTH TO ACHIEVE THIS. WE HOPE THIS SCULPTURE WILL BE ABLE TO RAISE AWARENESS OF THE IMPORTANCE OF PHYSICAL ACTIVITY IN THE ENVIRONMENT AND THE POWER THIS HAS TO IMPROVE PHYSICAL AND MENTAL WELLBEING. THE COLLIE MACKENZIE HERITAGE GROUP HAVE COMMITTED THEIR EFFORTS FOR OVER A DECADE TO THE PROJECT, AND THEIR DEDICATION TO THE CAUSE CAN ONLY BE SHADOWED BY THE STRONG BOND COLLIE AND MACKENZIE HAD AND THE GREAT PEAKS THAT THE TWO MEN CONQUERED.

IAN BLACKFORD MEMBER OF PARLIAMENT FOR ROSS, SKYE AND LOCHABER THE COLLIE MACKENZIE HERITAGE GROUP ARE VERY PROFESSIONAL IN THEIR APPROACH AND HAVE ALREADY UNDERTAKEN AND SUCCESSFULLY COMPLETED A GREAT NUMBER OF PROJECTS AROUND SLIGACHAN WHILE INVOLVING SCHOOLCHILDREN AND VOLUNTEERS FROM RIGHT ACROSS THE ISLAND. WHAT A TREMENDOUS VISION THEY HAVE HAD IN DEVISING A TOURIST TRAIL THAT WILL LINK TO THE STATUE OF THESE GREAT, WORLD RENOWNED CLIMBERS AND TAKE PEOPLE ON A ROUTE WHICH WILL SHOW OFF SOME OF SKYEâ&amp;#x20AC;&amp;#x2122;S MOST BEAUTIFUL SCENERY. I KNOW THEY HAVE NOW BEEN GOING FOR TWELVE YEARS AND THAT THEIR ENTHUSIASM FOR THE PROJECT IS A STRONG AS EVER, WHICH IS REALLY HEARTENING TO SEE. I WILL DO EVERYTHING I CAN TO HELP THEM CLOSE THE FUNDING GAP AND FINALLY GET THE STATUE MADE AND PUT IN PLACE.

I have been following the great work of the Heritage Group for many years as they commemorate the achievements of John MacKenzie a local guide and indeed his friendship with mountaineering pioneer, Norman Collie. The plans for a bronze sculpture of both men to be erected at Sligachan on Skye is a great project. As a lover of Skye and its mountains and wild places for over 50 years what a fitting tribute this would be to great men of such differing backgrounds. The statue would be a superb addition to this special place. I give this project my full support and when completed with your help will be a great testimonial to those pioneers who opened up this great mountain range for future generations to share. David &quot;Heavy&quot; Whalley MBE. BEM

THIS IS A FABULOUS PROJECT AND IT HAS MY 100% BACKING AND SUPPORT. CHRIS BONINGTON

The Canada connection Over the years the CMHG have fostered close ties with our Canadian cousins, given the special relationship that Norman Collie had to Canada, especially Alberta, BC, and the Rockies.

Collie made 5 expeditions in total to the Rockies, and as well as making 22 first ascents on some of the most iconic landmarks of the area, he also explored and mapped much of the terrain.

October 2018 Exhibition in the Archive Centre Portree, Isle of Skye

The story of Collie and MacKenzie and their connection to the wider world. The exhibition will contain: Artwork from a recent collaboration between Portree High School pupils, Skye and Mt Boucherie High school, Kelowna, BC, Canada. Climbing artifacts. A maquette of the proposed sculpture. Old photographs of both men and their climbs.

The exhibition will run from 1st October till 2nd

Collie and MacKenzie with Cuillin backdrop by Sara Ossaiden aged 15

Modern pioneer Danny Macaskill featured alongside pioneers of the past, Norman Collie and John Mackenzie

Drum which was made and decorated by Indigenous pupils of Kelowna, BC.

The vision is to see a 1.5 life size bronze sculpture of Norman Collie and John Mackenzie placed in this location

Blue circle outlines the location of the sculpture

Signage at the site

Now we need your support to help us finish the project How can you help? Our community Heritage group have raised £200,000 towards infrastructure at Sligachan, including stone walls and seating areas, a bronze relief of the Cuillin, paths, picnic tables and benches, an oak shelter and interpretation panels

In addition to this, over £ 99, 250 has been received in donations and pledges towards the sculpture, from people worldwide. The amount which remains to be raised is £17, 750. There are three ways to donate Cheque: Made payable to

With your help we can make history on Skye and honour two early pioneers who did much to raise the profile of Skye and the Cuillin, both at home and abroad.

Artistâ&amp;#x20AC;&amp;#x2122;s impression of the sculpture in place

Artistâ&amp;#x20AC;&amp;#x2122;s impression of the sculpture in place

The story of the journey to build a sculpture of two pioneering climbers on the Isle of Skye, Scotland.