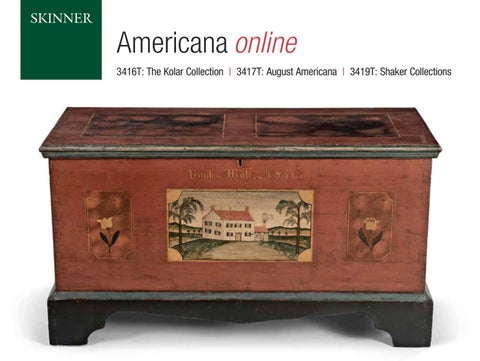 Welcome to August Americana at Skinner! Our three online sales offer all that you’ve come to expect this time of year, and more. We’ve showcased some highlights here, please join us online to explore the rest. Assembled over the past 35 years, the Kolar Collection includes over 300 lots of colorful folk art acquired from a wide range of sources, from top dealers to small rural auctions across Pennsylvania, Ohio, and New England. Rare painted blanket chests, slip-decorated redware, painted woodenware, weathervanes, and a variety of fine Winsdsor chairs—the collection provides an exceptional opportunity to acquire fine pieces not often available today. You will find American-made furniture spanning the late 17th through the late 19th century—well-crafted pieces from all over the Northeast highlighted by the carved “MH” Hadley chest, a Massachusetts-made walnut veneer high chest in old surface, and a cherry chest of drawers made in the Deerfield vicinity with an impressively scalloped top. There are several pieces from a collection assembled with a fastidious eye for early surfaces, and a selection of early Pennsylvania furniture including tall clocks and case pieces from two private collections. As is always the case, this August’s Americana offerings are brightened by a variety of colorful folk art objects and painted furniture. Paint-decorated and grain-painted pieces include a four-drawer chest from Vermont, and a simple, elegant painted dressing table with an understated decorative scheme. More color is added via a large selection of hooked rugs, painted boxes in many shapes and sizes, and a group of gilt and molded copper weathervanes. Items from two family collections make up the core of about 180 lots of material being offered in Shaker Collections online. Large case pieces anchor each collection—a yellow-painted cupboard over drawers from Hancock or New Lebanon, and a ten-drawer butternut Trustee’s chest from Enfield. But smalls and small furniture are abundant, too—pantry boxes in many sizes and colors, buckets, carriers, pails, candlestands and chairs. The lover of antiques with a modern aesthetic will surely find something worth their attention here.

Redware Fine slip-decorated redware in the Kolar Collection includes inscribed plates, dishes with floral and geometric patterns, miniature items, and rare signed examples by Pennsylvania potters John Bell and Willoughby Smith. As seen in these examples, redware pottery is beautiful in its simplicity. Often thickly potted and decorated with trailed slip and colored glaze, redware appealed to a wide American audience because of its durability. Hardly a rural 19th century Pennsylvania or New England home would be without a few pieces gracing the dinner table.

Early Stoneware Salt-glazed stoneware was ubiquitous in early American households. Decorated in colorful enamels, incised and cobalt-decorated floral motifs, or plain white molded patterns, these wares were among the first mass-produced and inexpensively priced table wares to flood the mid-18th century American market. While they are rarely seen today, this sale offers an attractive selection of forms, some with interesting and historical inscriptions.

Enigmatic and fanciful, many of the objects on offer were made outside urban centers and/or without a rigorous adherence to the â&#x20AC;&#x153;high styleâ&#x20AC;? that the 19th century cultural elite demanded. Folk artists and rural artisans created highly regionalized and often personalized interpretations of the decorative arts made by their urban counterparts. Furniture makers used exuberant graining to evoke expensive exotic wood, and painted banding, pinstriping, and decoration to emulate inlay. Painters sought to portray their subjects with a distilled essence, since for many a realistic likeness was beyond their skill level. Others simply created artful objects in the name of practicality or amusement. All of that is on view at Skinner this August.

Renowned for their ingenuity, craftsmanship, and attention to detail, the Shakers often appear to have chosen function over form. Their oval pantry boxes can stack in neatly graduated sizes, some of their chairs are designed hang on peg racks to get them off the floor when not in use, and their cupboards and worktables of variable form are designed for the expediency of the intended user. Now, paradoxically, 21st century collectors covet the simple logic and timeless elegance of Shaker design—certainly an unintended consequence of those 19th century makers. Free of excessive decoration, and defined most often by simplicity, Shaker furniture and woodenware plays as well with modern design as it can with “traditional” American antiques.