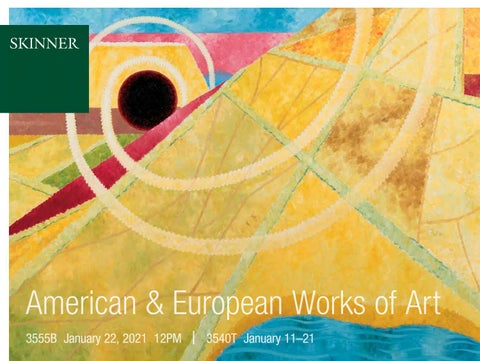 American &amp; European Works of Art January 11th heralds the beginning of our first 2021 auction of Prints, Multiples, &amp; Photographs—a timed auction which runs until the 21st—lots begin closing at 7pm. Bid at your leisure at any time within this window on iconic works by Chuck Close, Jasper Johns, Edward Weston, Andy Warhol, and Richard Avedon—the sale encompasses over 200 lots. Then join us on Friday, January 22nd at noon for a virtual live auction of Paintings, Sculpture, &amp; Works on Paper. This auction features select works by a diverse group of artists from the 16th century to the present. We will miss seeing you in the auction room, but our auctioneers will be conducting the auction, taking real-time bids via telephone, by proxy, and through our website.

“After” Many 20th century artists worked in conjunction with their dealers to publish prints designed after their paintings and drawings, as a way to sell their art to a broader range of collectors, including those with more limited means—and the market for these “afters” continues to grow. As early as 1920 Picasso had teamed up with Galerie Rosenberg in Paris to publish a suite of “afters”: Pablo Picasso. Dix Pochoirs. Lot 1097 is an impression of Guitare et partition sur guéridon, from this series. The composition reproduces a gouache also from 1920. The Galerie Rosenberg, owned by the influential dealer Paul Rosenberg, was located just up the Rue la Boétie from where Picasso and his then wife, Olga, lived in the late 1910s and early 1920s. Rosenberg and Picasso had a close working relationship and deep friendship. Another example is Lot 1099, Pablo Picasso’s Buste de femme au chapeau bleu (Dora Marr), a color lithograph printed by Mourlot in 1955, and based on Picasso’s painting of 1944. The initial printing was an edition of 100 before lettering. Text was added, and the print used as an exhibition poster for the Musée des Arts Décoratifs, Paris. 1097 After Pablo Picasso (Spanish, 1881-1973), Guitare et partition sur guéridon, from the series Pablo Picasso. Dix Pochoirs, 1920, color pochoir on laid paper $7,000-9,000

Picasso certainly did not corner the “afters” market. Many of the blue chip names of the 20th century joined in, as seen in Lot 1080, Henri Matisse’s color etching and aquatint Odalisque au coffret rouge (Odalisque with Red Box), printed in 1952 after his painting of 1926.

Edward Curtis Intended to be a five-year project, The North American Indian became a 30-year endeavor as Edward Curtis visited over 80 tribes west of the Mississippi and into Canada, taking over 40,000 photographs. A monumental undertaking made possible by the initial backing of J. Pierpont Morgan, Curtis’s publication captured what he believed was a “vanishing race” in the face of forced assimilation and allotment by the United States government. What was aimed to be a comprehensive and permanent record of North American tribes evolved into a blend of documentary and staged photography which helped found the archetypal image of the “Native American” that is still pervasive today. A proliferation of Curtis photogravures exists today alongside the rarer photographic formats of silver gelatin prints, platinum prints, and orotones. However, the vintage copper printing plates are one of the rarest offerings on the Curtis market. Of the thousands of vintage photogravures from The North American Indian on the market and in collections around the world, only a single photogravure plate was produced for each image. Offered alongside an orotone of one of Curtis’s most renowned images, The Rush Gatherer, Kutenai, these three works are the first small format printing plates by Curtis ever to be auctioned.

European Works of Art Studio of Elisabeth Louise Vigée Le Brun Marie-Antoinette and Her Children This copy of the famous portrait of Marie-Antoinette and her children was commissioned in the mid-19th century from the Studio of Vigée Le Brun by the Irigoyen family, Spanish aristocrats and close associates of the French royals. It recreated at the same large scale one of Vigée Le Brun’s most renowned works (of 1787), a national treasure held in the collection at Versailles. The Versailles painting, the largest ever created by Vigée Le Brun, had been commissioned by the Office of Royal Households specifically to restore the image of MarieAntoinette, wife of Louis XVI, who had fallen dangerously out of favor with the French people for her frivolity and lavish spending. The figures are shown life size in the Salon de la Paix, with a glimpse of the Hall of Mirrors on the left. Vigée Le Brun posed the figures in a triangular arrangement, a convention normally employed for depictions of The Holy Family, and the Dauphin lifts the drape over an empty cradle, a somber reminder of the death of the family’s fourth child. Marie-Antoinette sits at the center, her face solemn, expressive of her loss and her ongoing devotion to her children, a dutiful mother and queen. Elisabeth Vigée Le Brun (1755-1842) was the favorite artist of Marie-Antoinette and painted the Queen over 30 times. The two women, who were about the same age, enjoyed a friendly relationship, one that benefited the artist but also drove her into exile as the French Revolution approached, to pursue her artistic career across the royal courts of Europe.

View the sale &amp; register to bid online or by phone: skinnerinc.com

Rufino Tamayo A painter, printmaker, and sculptor, Rufino Tamayo was a prolific artist influenced by his Mexican heritage as well as by European modernism, including Cubism and Surrealism. He developed a unique style focused on form and color in the depiction of vernacular objects like the animals and fruits of his home country. Rejecting the social realism and the historical narrative style of his contemporaries, Mexican muralists Diego Rivera and José Clemente Orozco, Tamayo studied color, line, and composition in his still lifes which, over time, became increasingly minimalist. Tamayo began to create sculptures late in life, and this iconic example presents the watermelon motif in its sparest form—devoid of color, texture, or detail, but still recognizable by its distinctive shape.

Century’s Edge Collector John L. Stewart sought out large, bold, and vibrant works by contemporary artists. His unique collection focused on the work of early- to mid-career artists­—three are featured here: Thaddeus Strode creates wild, large-scale paintings and drawings using a variety of media including oil, acrylic, and spray paints, as well as glitter and collage. He combines imagery and text from his interests in California’s surf and skateboard culture, punk rock, horror films, and comic books to create wild mash-ups that juxtapose the humorous and the horrific, featuring a repeated cast of characters that includes gorillas, castaways, ghosts, and monsters. Likewise, repetition plays a role in the work of Stephen Bush, who creates distinct series of works each focusing on a particular motif—an elephant, an explorer, beekeepers, farm equipment, and trash cans, among other characters, objects, and landscapes. Bush, however, employs a painting style vastly different than Strode’s chaotic drips and splatters. Committed to representational painting and a student of historical Western European techniques and processes, Bush applies a classical style to unromantic modern subjects. In his Pomme de Terre series, Bush depicts trash bins in shades of green (a nod to the traditional en grisaille technique, but modernized to an acid green color). While the subject seems simple enough, the title does not match (“pomme de terre” is the French term for potato). Potatoes are another of the repeated motifs in Bush’s œuvre, and the trash can series resulted from the artist’s 1996 residency at Cité Internationale des Arts, Paris, during which he drew a potato each day, then, at the completion of the residency, threw all of the drawings into a green trash bin. The narrative of the potatoes disappears from all but the title of the Pomme de Terre series, lost in the inexpressive, objective depiction of the trash bins. A master of restraint and austerity, Robert Wilson has devoted his career to creating Gesamrkunstwerks, productions that combine all art genres. His experimental theater works display his dexterity as a director, playwright, set/ lighting designer, choreographer, and visual artist. His sculptural and furniture pieces make their debuts on the stage as important elements that he considers to be performers on equal par with the actors. These pieces then proceed to galleries, museums, and private collections where they exist as independent artworks, separate from the theatrical productions for which they were made.

Fine Paintings & Sculpture auction on January 22 covers a broad range of Western styles, media, and regions from the 16th century to the present day including paintings, sculpture, and works on paper. Fine Prints & Photographs auction open for bidding January 11-21 features American and European works spanning from old masters to contemporary.