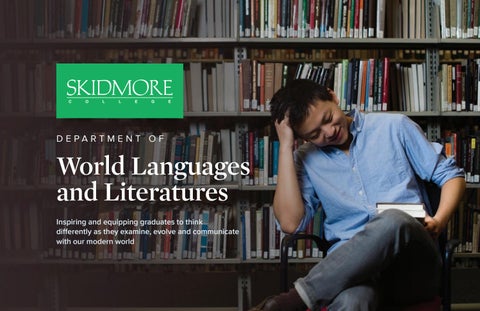 World Languages and Literatures Inspiring and equipping graduates to think differently as they examine, evolve and communicate with our modern world

Why study world languages and literatures?

Because no matter your destination — classroom, boardroom or digital room that reaches around the world — proficiency in multiple languages is in demand. That’s why Skidmore’s liberal arts curriculum requires students to complete at least one foreign language course. Whether you come to us for one course, a minor or a major, we promise you’ll not only gain competitive skills, but also critical cultural awareness. Plus, we do it with a dash of creativity. Here, you’re empowered to major, dual major, minor, or pave an altogether different path. Combine chemistry with Chinese, studio art with Spanish or even geosciences with German. You’ll graduate as a compassionate global citizen - inspired and equipped to think differently as you evolve and communicate within an increasingly diverse world.

Juan Felipe Herrera, the first Mexican American to be appointed U.S. Poet Laureate, visits with students after a public reading on campus.

Majors: SPANISH, FRENCH, GERMAN At the end of your time here as a language major, you will be fluent in one or more of the modern languages above, understand the civilization and culture that the/each language expresses and be able to interpret texts linguistically, stylistically and historically in your chosen language(s). INTERDEPARTMENTAL MAJORS: Thanks to a tight-knit curriculum community, we also offer majors in Business-French, Business-German, Business-Spanish, Political Science-French, Political Science-German and Political Science-Spanish. Each major is also available as a minor. Right: There are more than 100 student-run clubs at Skidmore and many offer opportunities for multicultural learning and connection.

Spanish Language and Literature Discussion Business Spanish Literature of the Golden Age Spanish in the Media Tales of the Wondrous Lands: The Hispanic Transatlantic World

Students majoring in German complete a minimum of 30 credit hours above Elementary German II (WLG 102). One course on a topic related to German culture, taken in English, may also count toward the major with chairâ&#x20AC;&#x2122;s approval. Students must complete the following core courses: WLG 203 WLG 208 WLG 215 WLG 376

GERMAN MINOR Students minoring in German complete WLG 208, WLS 215 and three other courses beyond WLG 102 in German language, literature or civilization for a total of at least 18 credit hours.

The Chinese program at Skidmore offers language classes from beginning to advanced levels, as well as courses in Chinese literature and culture. Students minoring in Chinese complete a minimum of five courses totaling at least 18 credit hours in the discipline. Students must complete the following core courses: WLC 208 Intermediate Chinese (or permission of the department) WLC 210 Introduction to Chinese Culture and Literature WLC 300 300-level course of your choosing Students can then choose from various other Chinese courses offered each semester. Examples include: WLC 204 WLC 208 WLC 206 WLC 302 WLC 363 WLC 371

A variety of options are available to explore the Italian language and culture. Courses in beginning, intermediate, and advanced Italian are complemented by courses on Italian film, literature, culture, and the study of fascism and the Holocaust.

In addition to a four-year language curriculum, the Japanese program offers a variety of courses on Japanese literature, culture, and film, many of which fulfill both the Non-Western Culture and Humanities requirements.

Students minoring in Japanese complete a minimum of five courses above Elementary Japanese totaling at least 18 credit hours in the discipline. Students must complete the following core courses: WLJ 208 Intermediate Japanese (or permission of the department) WLJ 210 Introduction to Japanese Culture and Literature WLJ 300 300-level course of your choosing Students can then choose from various other Japanese courses offered each semester. Examples include: WLJ 206 WLJ 271 WLJ 311 WLJ 363 WLJ 371

SELF-INSTRUCTION COURSES TAUGHT IN ENGLISH LANGUAGES ACROSS THE CURRICULUM

Languages across the curriculum A 1- or 2-credit course offered to expand your learning of another discipline by studying it in multiple languages. For a full listing of department courses, visit https://www.skidmore.edu/wll/courses

“View your studies as an adventure, an exploration. Or as the French call it, formation —a training of the mind.” — Joseph Kaifala ’08

Joseph founded the Jeneba Project while he was a Skidmore student. This nonprofit works to provide and promote educational opportunities for students in Sierra Leone, Guinea and Liberia, and to defend and foster fundamental human rights.

“I began learning German at Skidmore at an elementary level and became fluent while studying abroad in Berlin. This fluency led to an amazing internship with the German government supporting international cooperation, sustainable development and education.” — Megan Pini ’14

Megan won a Fulbright grant to teach English in Hettstedt, Saxon-Anhalt, Germany and has worked with social and political advocacy groups in Berlin.

“Studying Spanish at Skidmore was one of the wisest decisions I have ever made. I’m amazed how this language has enhanced both my professional and social lives. Whether I’m helping my students’ families interpret information or conversing with native speakers, I’m proud to be bilingual.” — Eric Moretti ’13

Eric recently completed his masters at the University of Granada Spain and is now a Spanish teacher at a top public charter school in New York State.

Change your view of the world ... and let it change you. Skidmore pushes you to follow that sense of personal and academic adventure and exploration. Everything you learn abroad helps shape your ability to reason with, relate to and perceive things differently. Itâ&#x20AC;&#x2122;s about building cross-cultural competencies and connections, something that goes a long way, no matter what youâ&#x20AC;&#x2122;re studying.

A few of the places our students have gone: • Paris, France 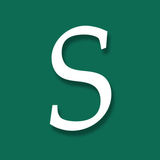