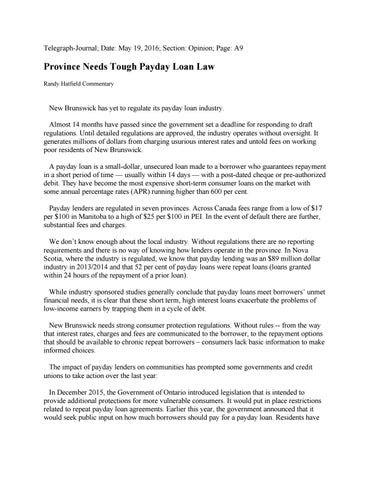 New Brunswick has yet to regulate its payday loan industry. Almost 14 months have passed since the government set a deadline for responding to draft regulations. Until detailed regulations are approved, the industry operates without oversight. It generates millions of dollars from charging usurious interest rates and untold fees on working poor residents of New Brunswick. A payday loan is a small-dollar, unsecured loan made to a borrower who guarantees repayment in a short period of time — usually within 14 days — with a post-dated cheque or pre-authorized debit. They have become the most expensive short-term consumer loans on the market with some annual percentage rates (APR) running higher than 600 per cent. Payday lenders are regulated in seven provinces. Across Canada fees range from a low of $17 per $100 in Manitoba to a high of $25 per $100 in PEI. In the event of default there are further, substantial fees and charges. We don’t know enough about the local industry. Without regulations there are no reporting requirements and there is no way of knowing how lenders operate in the province. In Nova Scotia, where the industry is regulated, we know that payday lending was an $89 million dollar industry in 2013/2014 and that 52 per cent of payday loans were repeat loans (loans granted within 24 hours of the repayment of a prior loan). While industry sponsored studies generally conclude that payday loans meet borrowers’ unmet financial needs, it is clear that these short term, high interest loans exacerbate the problems of low-income earners by trapping them in a cycle of debt. New Brunswick needs strong consumer protection regulations. Without rules -- from the way that interest rates, charges and fees are communicated to the borrower, to the repayment options that should be available to chronic repeat borrowers – consumers lack basic information to make informed choices. The impact of payday lenders on communities has prompted some governments and credit unions to take action over the last year: In December 2015, the Government of Ontario introduced legislation that is intended to provide additional protections for more vulnerable consumers. It would put in place restrictions related to repeat payday loan agreements. Earlier this year, the government announced that it would seek public input on how much borrowers should pay for a payday loan. Residents have

until May 20 to provide online feedback on whether fees should stay the same -- $21 per $100 – or be lowered to $15, $17 or $19. In January, Vancity, Canada’s largest community credit union, reported that an increasing number of British Columbians are using payday loans to make ends meet. According to the study between 2012 and 2014, there was a 58 per cent jump in the number of people in the province using payday loans. Vancity is calling for increased access to other forms of affordable, highquality credit. In Calgary, anti-poverty organization Momentum and First Calgary Financial Credit Union are partnering to pilot the Cash Crunch Micro Loan that offers small, short term loans with a 12 per cent APR to borrowers who complete free financial literacy workshops. In March, Toronto city councillors voted to look at ways to restrict where payday loan operators can set up shop in the city. They approved a request to look at drafting a bylaw that would stop payday loan branches from clustering in certain neighbourhoods. Last week the Alberta government introduced Bill 15, An Act to End Predatory Lending, which would bring the amounts paid on payday loans from $23 per $100 borrowed down to $15 per $100, the lowest in Canada. The Act also provides for instalment payments and commits the government to“promote the development, implementation and use of short-term lending options as an alternative to payday loans”. Concern over the prevalence and practices of the payday industry has attracted the attention of the private sector too. Last week, Google announced that effective July 13, 2016 they will ban ads for payday loans from their systems. “This change is designed to protect our users from deceptive or harmful financial products.”Ads for financial services require particular vigilance“given how core they are to people’s livelihood and well being”. Google took straight aim at the industry:“When reviewing our policies, research has shown that these loans can result in unaffordable payment and high default rates for users so we will be updating our policies globally to reflect that.” The Human Development Council responded to the province’s request for comments on its proposed regulations last year. At that time we proposed a maximum fee of $17 per $100, along with an extended payment plan to ease the burden on repeat borrowers and an enhanced provision of financial literacy programs. Those recommendations remain relevant. Although New Brunswick passed Payday Loan legislation in 2008, it was never proclaimed and put into force. It needs – and continues to await - regulations. Let’s hope the waiting ends soon. Randy Hatfield is executive-director of the Saint John Human Development Council