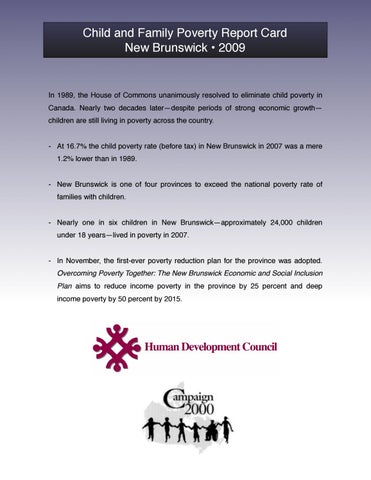 In 1989, the House of Commons unanimously resolved to eliminate child poverty in Canada. Nearly two decades later—despite periods of strong economic growth— children are still living in poverty across the country. - At 16.7% the child poverty rate (before tax) in New Brunswick in 2007 was a mere 1.2% lower than in 1989. - New Brunswick is one of four provinces to exceed the national poverty rate of families with children. - Nearly one in six children in New Brunswick—approximately 24,000 children under 18 years—lived in poverty in 2007. - In November, the first-ever poverty reduction plan for the province was adopted. Overcoming Poverty Together: The New Brunswick Economic and Social Inclusion Plan aims to reduce income poverty in the province by 25 percent and deep income poverty by 50 percent by 2015.

The Human Development Council is a local social planning council that co-ordinates and promotes social development in Greater Saint John. It has two key functions: an information role of linking citizens to human services and a proactive role of developing solutions to meet our communityĘźs challenges.

Introduction In 1989 the Federal House of Commons unanimously agreed to seek to end child poverty in Canada by the year 2000. This goal has not been achieved. In fact, the child poverty rate has budged only slightly.

The Campaign 2000 initiative has been encouraging provinces to take action in eliminating child and family poverty. It has also been seeking to remind the public and the federal government of the promise that was made to our children twenty years ago. This report is one of many provincial report cards that have been written across Canada to paint a picture of the current state of child and family poverty. This is the fourth year that a New Brunswick Report Card on Child and Family Poverty has been prepared – it describes New Brunswickʼs child poverty history and the particular challenges it faces.

More than 24,000 New Brunswick children are living in families with incomes below the poverty line. Our province is among those that have demonstrated minimal decreases in child poverty rates, going from 17.9% in 1989 to 16.7% in 2007.

The Plan introduces immediate social assistance reform – it abolishes the interim rate, provides a health card to those exiting social assistance for up to three years and limits the household income policy to those in spousal relationships. It calls for more sweeping reforms over a five year period. Significantly, the Plan received support from both political parties with seats in the Legislature. The province has stepped up. Itʼs time for the federal government to make poverty reduction a priority.

Statistics Canada produces two sets of low income indicators – the first based on before tax income and the second based on after tax income. There is a b o u t a fi v e p e r c e n t a g e p o i n t difference between them. This report relies on before tax data because Statistics Canada states that poverty indicators based on after tax income should be used with caution for the Atlantic Provinces due to small sample sizes. The term child/children has been used throughout as a shorthand for those under 18 years of age.

The percentage of New Brunswick children living below the poverty line has fluctuated since the House of Commonsʼ resolution to eliminate child poverty, from a high of 24.8% in 1995, to a low of 14.8% in 2001. After dropping in 2004 and 2005 the rate rose slightly in 2007 to 16.7% and now exceeds the national average (15.0%). The 2007 rate means that about 24,000 children—almost one in six—lived in poverty, a stubbornly high rate despite periods of strong economic growth. 2

Canada has no official poverty line but Statistic CanadaĘźs Low-Income Cut-Offs (LICOs) are the most widely used indicator of poverty. The Low-Income Cut-Offs are income levels where a household will spend a share of its income on food, shelter, and clothing that is 20% higher than the average family. They are adjusted for family and community size.

*New Brunswick currently has the second lowest minimum wage rate in the country. As part of The New Brunswick Economic and Social Inclusion Plan, the minimum wage will be raised to the Atlantic average by September 1, 2011 and adjusted for inflation every year going forward.

Hunger Count 2009 In March 2009, 294,738 separate individuals were assisted by a food bank or affiliated food program in Canada. This is an increase of 18% compared to the same period in 2008, and is the highest-year-over-year increase on record. In 2009, food bank use has nearly reached the record levels experienced in 2004, and is 10% higher than 10 years ago.

New Brunswick does not appear to have suffered from the recession to the same extent as other areas of Canada. However, the economic downturn in Western Canada and Ontario • has resulted in increased demand on charitable food programs in our province. Food banks and soup kitchens have seen a steady increase in clientele, including those returning home or passing through to the other Atlantic Provinces.

Acceptable Housing is defined as adequate and suitable shelter that can be obtained without spending 30 per cent or more of before-tax household income. Adequate shelter is housing that is not in need of major repair. Suitable shelter is housing that is not crowded, meaning that it has sufficient bedrooms for the size and make-up of the occupying household. The subset of households classified as living in unacceptable housing and unable to access housing is considered to be in core housing need. In 2006, there were more than 29,000 households in New Brunswick in core housing need.

*Non-Family Households: Consists either of one person living alone or two or more persons who share a dwelling, but do not constitute a family. Source: The Co-Operative Housing Federation of Canada.The Dunning Report: Dimensions of Core Housing Need in Canada, Second Edition. August 2009.

Government programs such as the Canada Child Tax Benefit, Employment Insurance, GST Credit and New Brunswickʼs Low Income Tax Credit play an important part in preventing child and family poverty. In 2007, for example, the child poverty rate in New Brunswick would have been almost twice as high without public investments—32.0% versus 16.7%. Similarly, the affect of government transfers nationally was to reduce the poverty rate of children from 24.5% to 15.0%.

The New Brunswick Economic and Social Inclusion Plan abolished the Interim Assistance Program (INT). The plan calls for the government over the next five years - to “restructure and increase social assistance rates including a new regime more appropriate for persons with disabilities.”

There is a growing gap between the richest and poorest New Brunswick families, reflecting the increased inequality in the Canadian economy. The graph above shows the average total incomes for the poorest 10% of families with children, all families with children and the wealthiest 10%. Total income refers to all income before taxes, which includes wages and salaries, earnings from self-employment and earnings from investments. It also includes government benefits from both the federal and provincial governments, such as the Canada Child Tax Benefit, Employment Insurance benefits and welfare. While the average income of the poorest 10% of families with children fell between 1989 and 2007, the richest 10% enjoyed regular and substantial increases.

Changes in the Average Total Income by Decile Group, All NB Families with Children, in Constant $2007

These changes in income underline the increasing inequality in the NB economy. Despite continued economic growth, poor families have seen no real improvement in their situation, while wealthy families have typically had increases in their incomes. The income ratio between the wealthiest and poorest 10% of families with children in NB has risen from 8 to 1 in 1989 to 11 to 1 in 2007.

What the provincial government has done: Excerpts form the Economic and Social Inclusion Plan: Over five years: • Move from rules based to outcome based system. • Move from passive assistance to employment orientation. • Move from focus on income poverty to social and economic inclusion. • Restructure and increase social assistance rates including a new regime more appropriate for persons with disabilities. • Significant overhaul of household income policy. • Introduction of vision and dental care for children in low-income families by April 1, 2011. • Provide more opportunities to keep earned income as individuals transition to work. • Reform wage exemptions to include a working income supplement. • Raise allowable asset exemption. • Link benefits such as child care, home heating and health to household income to the extent possible.

What the federal government needs to do: • Enhance the child benefit for low-income families to a maximum of $5,400 ($2009) per child. • Restore and expand eligibility for Employment Insurance. • Increase federal work tax credits to $2,400 per year. • Establish a federal minimum wage of $11 per hour. • Adopt a national housing plan including substantial federal funding for social housing. • Establish a system of high quality early childhood education and child care services that are affordable and available to all children. • Implement proactive strategies, including employment equity in the public and private sectors, to level the employment playing field for racialized communities and other historically disadvantaged groups. • Establish poverty reduction targets, timetables and indicators for Aboriginal families, irrespective of where they live, developed in coordination with First Nations and urban Aboriginal communities.

Campaign 2000 is a non-partisan, cross Canada network of over 120 organizations committed to working together to end child and family poverty in Canada. See www.campaign2000.ca for further information on actions you can take to help end child poverty.