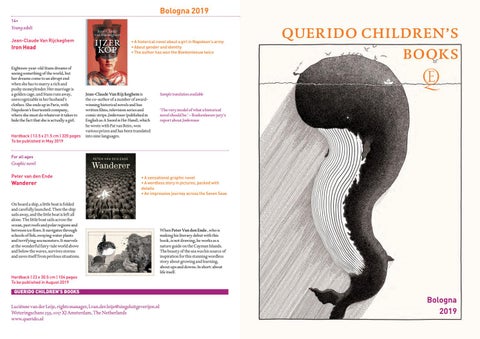 Eighteen-year-old Stans dreams of seeing something of the world, but her dreams come to an abrupt end when she has to marry a rich and pushy moneylender. Her marriage is a golden cage, and Stans runs away, unrecognizable in her husband’s clothes. She ends up in Paris, with Napoleon’s fourteenth company, where she must do whatever it takes to hide the fact that she is actually a girl. Hardback | 13.5 x 21.5 cm | 320 pages To be published in May 2019

Jean-Claude Van Rijckeghem is the co-author of a number of awardwinning historical novels and has written films, television series and comic strips. Jonkvrouw (published in English as A Sword in Her Hand), which he wrote with Pat van Beirs, won various prizes and has been translated into nine languages.

Sample translation available ‘The very model of what a historical novel should be.’ – Boekenleeuw jury’s report about Jonkvrouw

• A sensational graphic novel • A wordless story in pictures, packed with details • An impressive journey across the Seven Seas

On board a ship, a little boat is folded and carefully launched. Then the ship sails away, and the little boat is left all alone. The little boat sails across the ocean, past reefs and polar regions and between ice floes. It navigates through schools of fish, swaying water plants and terrifying sea monsters. It marvels at the wonderful fairy-tale world above and below the waves, survives storms and saves itself from perilous situations.

When Peter Van den Ende , who is making his literary debut with this book, is not drawing, he works as a nature guide on the Cayman Islands. The beauty of the sea was his source of inspiration for this stunning wordless story about growing and learning, about ups and downs. In short: about life itself.

We are proud of the following succesfull titles

A varied collection of poems full of surprising and original thoughts, wordplay and humour, alternating between colour and black-and-white illustrations. Sparkling poetry about a pesky little ghost, a man who once began a country, an armadillo under the bed, a traffic jam with no beginning and no end, and lots more besides. Hardback | 16.5 x 23 cm | 64 pages To be published in June 2019

This picture book shows a vegetable garden throughout the year, from January to December. The soil is prepared, plants are grown in the greenhouse and then replanted outside, where they are carefully tended. Whatever the season, there’s always plenty to do and to discover in the garden. Noëlle Smit’s love for the vegetable garden leaps off the pages and is contagious, whether you have green fingers or not.

• Poems for all readers of eight and up • Funny, touching and original • By an award-winning writer and illustrator

Janis lives with old Frid on top of a mountain, miles away from anywhere. All contact with other people is forbidden, because the world is far too dangerous. Frid occasionally ventures down the mountain to stock up on supplies. But one day Frid does not return. The food runs out and Janis has only one option: he heads down the mountain. Before long he realizes that he not only needs to go in search of Frid, but also of something even more important: his own roots.

‘Joke van Leeuwen’s head is so packed with original ideas, her heart is so full of feeling for children, and her humour is so valuable that only gold flows from her pen.’ – Noordhollands Dagblad

‘Incredibly strong and relevant literature that transcends age limits.’ – De Morgen on De regels van drie (The Rules of Three), which won the Woutertje Pieterse Prize and a Vlag en Wimpel from the Griffeljury.

Joke van Leeuwen (b. 1952) has written books for children and for adults, achieving great success in both fields. She has been nominated for both the Hans Christian Andersen Award and the Astrid Lindgren Memorial Award. In 2012 she won the Constantijn Huygens Prize for her entire oeuvre. Van Leeuwen demonstrates that highquality literature can also be warm and inviting. Her work has been translated into eleven languages. 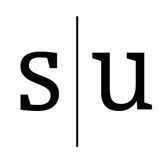