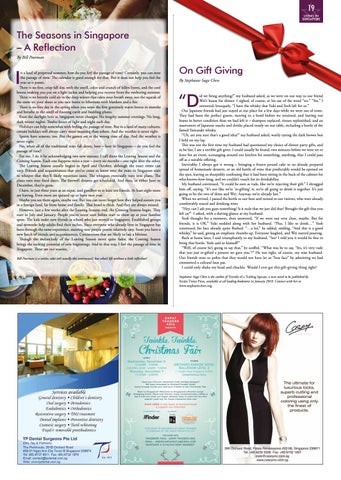 The Seasons in Singapore – A Reflection By Bill Poorman

n a land of perpetual summer, how do you feel the passage of time? Certainly, you can note the passage of time. The calendar is good enough for that. But it does not help you feel the year as it passes. There is no first, crisp fall day, with the smell, color and crunch of fallen leaves, and the cool breeze making you put on a light jacket and helping you recover from the sweltering summer. There is no bitterly cold air in the deep winter that takes your breath away, nor the squeak of the snow on your shoes as you race home to hibernate with blankets and a fire. There is no first day in the spring when you sense the first genuinely warm breeze in months and breathe in the smell of thawing earth and budding plants. Even the daylight here in Singapore never changes. No lengthy summer evenings. No long, dark winter nights. Twelve hours of light and night each day. Holidays can help somewhat with feeling the passage of time. But in a land of many cultures, certain holidays will always carry more meaning than others. And the weather is never right. Sports have seasons, too. But the games are at the wrong time of day. And the weather is never right. No, when all of the traditional ways fall down, how – here in Singapore – do you feel the passage of time? For me, I do it by acknowledging two new seasons. I call them the Leaving Season and the Coming Season. Each one happens twice a year – every six months – one right after the other. The Leaving Season usually begins in April and October, although the exact times can vary. Friends and acquaintances that you’ve come to know over the years in Singapore start to whisper that they’ll likely repatriate soon. The whispers eventually turn into plans. The plans turn into fixed dates. The farewell dinners get scheduled. And then, in either June or December, they’re gone. I have, in just three years as an expat, said goodbye to at least ten friends. At least eight more are leaving. Even more are queued up to leave next year. Maybe you see them again, maybe not. But you can never forget how they helped sustain you in a foreign land, far from home and family. That bond is thick. And they are always missed. However, just a few weeks after the Leaving Seasons end, the Coming Seasons begin. They start in July and January. People you’ve never seen before start to show up at your familiar spots. The kids make new friends at school who just moved to Singapore. Established groups and networks help adults find their niches. Since everyone who already lives in Singapore has been through the same experience, meeting new people proves relatively easy. Soon you have a new batch of friends and acquaintances. Connections that are likely to last a lifetime. Though the melancholy of the Leaving Season never quite fades, the Coming Season brings the exciting potential of new beginnings. And in that way, I feel the passage of time in Singapore. These are our seasons.

Bill Poorman is a writer, who isn’t usually this sentimental, but what’s life without a little reflection?

id we bring anything?” my husband asked, as we were on our way to our friend Wei’s house for dinner. I sighed, of course, at his use of the word “we.” “Yes,” I answered, brusquely. “I have the whisky that Yuki and Yosh left for us.” Our Japanese friends had just stayed at our place for a few days while we were out of town. They had been the perfect guests, moving to a hotel before we returned, and leaving our home in better condition than we had left it – shampoo replaced, tissues replenished, and an assortment of Japanese snacks and drinks placed neatly on our table, including a bottle of the famed Yamazaki whisky. “Uh, are you sure that’s a good idea?” my husband asked, warily eyeing the dark brown box I held on my lap. This was not the first time my husband had questioned my choice of dinner party gifts, and to be fair, I am a terrible gift giver. I could usually be found, two minutes before we were set to leave for an event, scrounging around our kitchen for something, anything, that I could pass off as a suitable offering. Inevitably, I always got it wrong – bringing a frozen pound cake to an already prepared spread of homemade desserts, or an old bottle of wine that predictably would be opened on the spot, leaving us sheepishly confessing that it had been sitting in the back of the cabinet for who-knows-how-long, and we couldn’t vouch for its drinkability. My husband continued, “It could be seen as rude, like we’re rejecting their gift.” I shrugged him off, saying, “It’s not like we’re ‘re-gifting’ it; we’re all going to drink it together. It’s just going to be the two of them and Wei. Anyway, we’re already late.” When we arrived, I passed the bottle to our host and turned to our visitors, who were already comfortably seated and drinking wine. “Hey, can I ask you guys something? Is it rude that we just did that? Brought the gift that you left us?” I asked, with a darting glance at my husband. Yosh thought for a moment, then answered, “If we were not very close, maybe. But for friends, it is OK.” Yuki nodded along with her husband. “Plus, I like to drink…” Yosh continued, his face already quite flushed. “…a lot,” he added, smiling. “And this is a good whisky,” he said, giving an emphatic thumbs up. Everyone laughed, and Wei started pouring. Back at home later, I said triumphantly to my husband, “See? I told you it would be fine to bring that bottle. Yosh said so himself!” “Well, of course he’s going to say that,” he scoffed. “What was he to say, ‘Yes, it’s very rude that you just re-gifted a present we gave you.’?” He was right, of course, my wise husband. Our friends were so polite that they would not have let us “lose face” by admitting we had committed a cultural faux pas. I could only shake my head and chuckle. Would I ever get this gift-giving thing right?

Stephanie Suga Chen is the author of Travails of a Trailing Spouse, a new novel to be published by Straits Times Press, available at all leading bookstores in January 2018. Connect with her at www.stephaniechen.org. More from American Association of Singapore