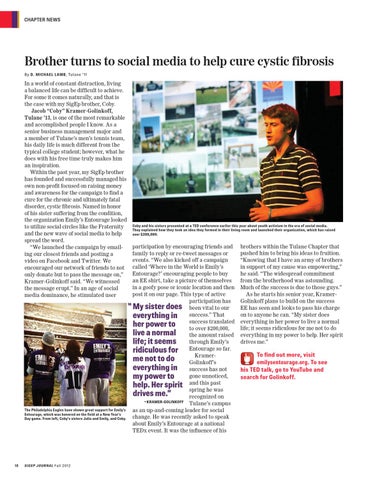 In a world of constant distraction, living a balanced life can be difﬁcult to achieve. For some it comes naturally, and that is the case with my SigEp brother, Coby. Jacob “Coby” Kramer-Golinkoff, Tulane ’13, is one of the most remarkable and accomplished people I know. As a senior business management major and a member of Tulane’s men’s tennis team, his daily life is much different from the typical college student; however, what he does with his free time truly makes him an inspiration. Within the past year, my SigEp brother has founded and successfully managed his own non-proﬁt focused on raising money and awareness for the campaign to ﬁnd a cure for the chronic and ultimately fatal disorder, cystic ﬁbrosis. Named in honor of his sister suffering from the condition, the organization Emily’s Entourage looked to utilize social circles like the Fraternity and the new wave of social media to help spread the word. “We launched the campaign by emailing our closest friends and posting a video on Facebook and Twitter. We encouraged our network of friends to not only donate but to pass the message on,” Kramer-Golinkoff said. “We witnessed the message erupt.” In an age of social media dominance, he stimulated user

The Philadelphia Eagles have shown great support for Emily’s Entourage, which was honored on the ﬁeld at a New Year’s Day game. From left, Coby’s sisters Julia and Emily, and Coby.

Coby and his sisters presented at a TED conference earlier this year about youth activism in the era of social media. They explained how they took an idea they formed in their living room and launched their organization, which has raised over $200,000.

participation by encouraging friends and family to reply or re-tweet messages or events. “We also kicked off a campaign called ‘Where in the World is Emily’s Entourage?’ encouraging people to buy an EE shirt, take a picture of themselves in a goofy pose or iconic location and then post it on our page. This type of active participation has “ My sister does been vital to our everything in success.” That success translated her power to to over $200,000, live a normal the amount raised life; it seems through Emily’s ridiculous for Entourage so far. Kramerme not to do Golinkoff’s everything in success has not gone unnoticed, my power to this past help. Her spirit and spring he was drives me.” recognized on ~KRAMER-GOLINKOFF Tulane’s campus as an up-and-coming leader for social change. He was recently asked to speak about Emily’s Entourage at a national TEDx event. It was the inﬂuence of his

brothers within the Tulane Chapter that pushed him to bring his ideas to fruition. “Knowing that I have an army of brothers in support of my cause was empowering,” he said. “The widespread commitment from the brotherhood was astounding. Much of the success is due to those guys.” As he starts his senior year, KramerGolinkoff plans to build on the success EE has seen and looks to pass his charge on to anyone he can. “My sister does everything in her power to live a normal life; it seems ridiculous for me not to do everything in my power to help. Her spirit drives me.”

To ﬁnd out more, visit emilysentourage.org. To see his TED talk, go to YouTube and search for Golinkoff. 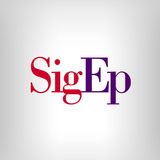