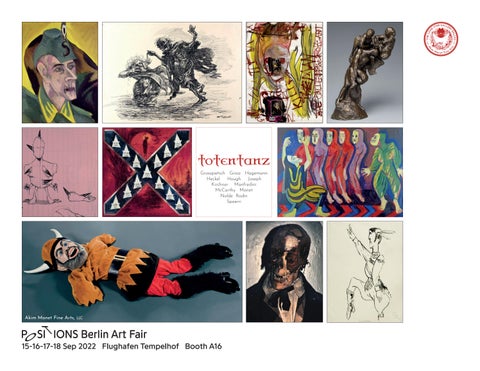 After a four-year hiatus from Europe, I am absolutely thrilled to exhibit again in Berlin. The Lone Star Gallery Dallas, the curatorial arm of Akim Monet Fine Arts, LLC will present the exhibition TOTENTANZ at the POSITIONS Berlin Art Fair from September 15 to 18, 2022. TOTENTANZ springs from a desire to fight back against the prevailing feeling of doom that surrounds us of late: COVID has claimed 6,5 million souls worldwide (1 million in the US alone); the Russian invasion of Ukraine echoes not-so-distant memories of wars that have set Europe on fire and spilled a seemingly endless river of blood; a heavily armed US is plagued with a virulent epidemic of mass shootings, and today’s America is reeling from a failed &quot;coup d’état&quot; attempted on January 6, 2021 by an ousted demagogue. Nevertheless, even as we humans have the propensity to destroy each other, we also have the uncanny capacity to transform strife into life, to dodge death somehow, and at times we leave to posterity works of art that testify to our will to survive.

It is this spirit that Akim Monet Fine Arts chooses to celebrate at the POSITIONS Berlin Art Fair in Tempelhof Airport; one that shies not away from addressing tough questions, one that fights for the oppressed, one that by small victories shows that there is a way forward! Welcome to TOTENTANZ, an exhibition featuring works by: Curt Grosspietsch, George Grosz, Mechthild Hagemann, Erich Heckel, James “Yaya” Hough, Cliff Joseph, Ernst Ludwig Kirchner, Giovanni Manfredini, Paul McCarthy, Akim Monet, Emil Nolde, Auguste Rodin, and Daniel Spoerri. I very much hope to see you in Berlin! Akim Monet August 2022

Painter and illustrator Curt Grosspietsch studied at the Dresden Art Academy during which time he developed a friendship with George Grosz and Otto Dix. Loosely following the style of Alfred Kubin, Grosspietsch placed the grotesque, horrible and bizarre at the center of his work.

Painter, draftsman, printmaker, George Grosz is known for pointed political satire and social criticism. Early work, from about 1914 to 1917, shows influence of Expressionism and Futurism, as well as caricature. Volunteered for war in 1914; discharged in 1915 after a sinus operation. Recalled in January 1917; suffered nervous breakdown, declared unfit for military service. Ran afoul of censorship laws three times in 1920s. Emigrated to New York in 1933. Declared an “enemy of the state” by Nazis, who confiscated his works in German museums; some destroyed. One month before his death in 1959, returned to Berlin. Starr Figura, German Expressionism: The Graphic Impulse, New York, The Museum of Modern Art, 2011

The existential experience and mental processing of reality are of central importance in the work of Mechthild Hagemann. In recent years, script has advanced far into the painterly realm and sometimes, especially in the group of paintings entitled &quot;Eselprotokolle&quot; (&quot;Donkey Protocols&quot;), takes on functions that constitute the picture in terms of both content and form. On the one hand, the comic- and cartoon-like quality of her work is thereby emphasized; on the other hand, the written bows and loops are also reminiscent of the banners of medieval painting. Sometimes dizzying whirlpools of meaning are created, which impressively allow seeing and living to merge into one another. Text by Thomas Janzen on the occasion of a 2012 exhibition at the Krefelder Kustverein

Dance, Tingeltangel, vaudeville and circus repeatedly inspired the “Brücke” artists. Heckel focused particularly on the circus and especially on its more melancholic aspects. It appears that Heckel was inspired by a silent movie featuring the actress Asta Nielsen.

James “Yaya” Hough, born and raised in Pittsburgh PA, is a contemporary artist and activist. His art interrogates issues of mass incarceration, U.S. history, race, violence, popular culture, and identity. Hough’s work was included in Marking Time: Art in the Age of Mass Incarceration, curated by Dr. Nicole R. Fleetwood, at MoMA PS1, Queens, NY; the exhibition travelled to the Abroms-Engel Institute for the Visual Arts, Birmingham, AL. In 2020, his work was featured in Rendering Justice, African American Museum in Philadelphia, Philadelphia, PA. In 2022 his work was included in Assembly: New Acquisitions by Contemporary Black Artists, an exhibition at the Blanton Museum of Art, Austin TX. James “Yaya” Hough’s work will be featured in the 2022 Carnegie International, opening in September 2022 in Pittsburgh PA. His work has been featured in Artforum, Dissent Magazine, The New York Times, PBS NewsHour, The Philadelphia Inquirer, and Philadelphia Magazine.

Observing dancers in a dance café was among Kirchner’s favourite activities. He was particularly interested in the capturing of movement, many of his series being reminiscent of early chronophotographic images of whole sequences of movement. These depictions were often created in various techniques and the same motif would appear in a whole diversity of media – drawing, chalk, pen/brush and ink, woodcut, etching, lithograph and oils – and sometimes as sculptures, tapestries and photographs.

Manfredini created Stabat Mater in memory of his mother who had died that year. The crown of thorns is made of rose branches from his mother&#39;s garden. Manfredini had the branches cast in silver, which he then plated in gold. With the title of the installation &quot;Stabat Mater&quot;, Manfredini refers to the medieval poem of the same name with the topic of Maria and her grief over her son&#39;s death. In 2015, the artist created a &quot;sister-piece&quot; of the crown of thorns and exhibited the work in the Chiesa Madonna dell&#39;Orto during the Venice Biennale. The famous composer Ennio Morricone accompanied the installation with his music.

Dead Viking, a favorite piece of its creator, is a hilarious and uncanny sculpture, fascinating in its combination of childlike humor and eerie, compelling oddities. With the present work, McCarthy has added another truly inventive manifestation both of his fascination with the weird and of his exploration of our theme-park world and manufactured culture. Dead Viking is an expression of the unstable humor that pervades McCarthy&#39;s art. It hangs out with its audience, sprawling across surfaces, using its comedic, human physicality to integrate itself into our environment. Source: https://www.christies.com/lotfinder/Lot/paul-mccarthy-b-1945-dead-viking-5495761-details.aspx

Collaborative drawing from a group originally presented in 2014 at The Box, LA under the title “Men in L.A.: Three Generations of Drawings.”

…what the exhibition accomplish[es] is to gather together twenty-five years of drawings by artists who depict the body in all its grotesquely sexual, scatological, and effluvial glory. Fittingly, the oldest artist in the show is Paul McCarthy, who has been creating all manner of abject and provocative art since the early 1970s. Beginning with simple early performances, McCarthy’s oeuvre has come to include sculpture, video, and installation, culminating in recent big-budget cinema spectacles. McCarthy’s “signature ingredients: violence, humor, sex, impotence, appetite, degradation, art history, politics, and pop culture are all present here…. The Men in the exhibition title refers not only to the artists, but to their subject matter. From Holland Cotter’s review in the New York Times

Photographer Akim Monet tackles the &quot;Capuchin Catacombs of Palermo,&quot; the largest collection of mummified remains in Europe, containing some 1,284 mummified and partiallyskeletonized bodies, some exceptionally well-preserved.

Gracious and perfidious, death camouflaged as a young, beautiful, nude dancer with long waving hair is surrounded by a circle of old men who seem unaware of death’s skeleton that shines through her delicate body. One can only imagine what will happen when the dance comes to an end.

Châtiment is a particularly complex group composition. 12 molds are required to cast all of the elements of this group. Once assembled, it becomes clear that the work represents a man bent forward, carrying the body of a woman, surrounded by two female figures, who appear suspended in the air. The title “Punishment” would seem to indicate that they are representations of the Greek Erinyes; the role of these deities, known by the Romans as the Furies, was to persecute criminals.

Born in Galati in Romania in 1930, Daniel Spoerri spent a childhood and youth marked by the full fury of the drama that swept across Europe after 1939. His father, a converted Jew and a Protestant missionary – actually a bookseller by trade – fell victim to a pogrom in Romania in 1941; his Swiss mother succeeded, in autumn 1942, in fleeing to Switzerland with her children. The family surname of Feinstein was dropped in favour of his mother’s maiden name of Spoerri. 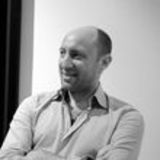