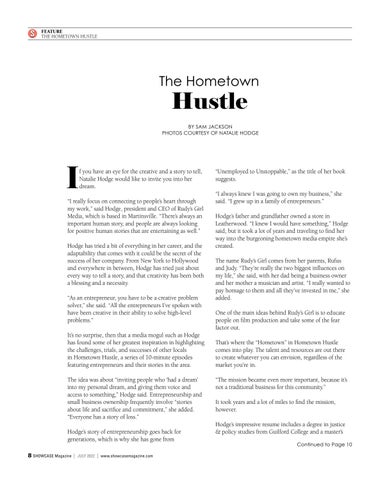 f you have an eye for the creative and a story to tell, Natalie Hodge would like to invite you into her dream.

“I really focus on connecting to people’s heart through my work,” said Hodge, president and CEO of Rudy’s Girl Media, which is based in Martinsville. “There’s always an important human story, and people are always looking for positive human stories that are entertaining as well.” Hodge has tried a bit of everything in her career, and the adaptability that comes with it could be the secret of the success of her company. From New York to Hollywood and everywhere in between, Hodge has tried just about every way to tell a story, and that creativity has been both a blessing and a necessity. “As an entrepreneur, you have to be a creative problem solver,” she said. “All the entrepreneurs I’ve spoken with have been creative in their ability to solve high-level problems.” It’s no surprise, then that a media mogul such as Hodge has found some of her greatest inspiration in highlighting the challenges, trials, and successes of other locals in Hometown Hustle, a series of 10-minute episodes featuring entrepreneurs and their stories in the area. The idea was about “inviting people who ‘had a dream’ into my personal dream, and giving them voice and access to something,” Hodge said. Entrepreneurship and small business ownership frequently involve “stories about life and sacrifice and commitment,” she added. “Everyone has a story of loss.” Hodge’s story of entrepreneurship goes back for generations, which is why she has gone from 8 SHOWCASE Magazine |

“Unemployed to Unstoppable,” as the title of her book suggests. “I always knew I was going to own my business,” she said. “I grew up in a family of entrepreneurs.” Hodge’s father and grandfather owned a store in Leatherwood. “I knew I would have something,” Hodge said, but it took a lot of years and traveling to find her way into the burgeoning hometown media empire she’s created. The name Rudy’s Girl comes from her parents, Rufus and Judy. “They’re really the two biggest influences on my life,” she said, with her dad being a business owner and her mother a musician and artist. “I really wanted to pay homage to them and all they’ve invested in me,” she added. One of the main ideas behind Rudy’s Girl is to educate people on film production and take some of the fear factor out. That’s where the “Hometown” in Hometown Hustle comes into play. The talent and resources are out there to create whatever you can envision, regardless of the market you’re in. “The mission became even more important, because it’s not a traditional business for this community.” It took years and a lot of miles to find the mission, however. Hodge’s impressive resume includes a degree in justice &amp; policy studies from Guilford College and a master’s Continued to Page 10

The July 2022 issue of Showcase Magazine. 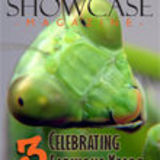