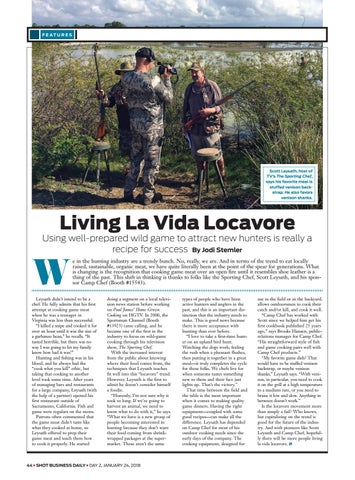 e in the hunting industry are a trendy bunch. No, really, we are. And in terms of the trend to eat locally raised, sustainable, organic meat, we have quite literally been at the point of the spear for generations. What is changing is the recognition that cooking game meat over an open fire until it resembles shoe leather is a thing of the past. This shift in thinking is thanks to folks like the Sporting Chef, Scott Leysath, and his sponsor Camp Chef (Booth #15543).

Leysath didn’t intend to be a chef. He fully admits that his first attempt at cooking game meat when he was a teenager in Virginia was less than successful. “I killed a snipe and cooked it for over an hour until it was the size of a garbanzo bean,” he recalls. “It tasted horrible, but there was no way I was going to let my family know how bad it was!” Hunting and fishing was in his blood, and he always had the “cook what you kill” ethic, but taking that cooking to another level took some time. After years of managing bars and restaurants for a large company, Leysath (with the help of a partner) opened his first restaurant outside of Sacramento, California. Fish and game were regulars on the menu. Patrons often commented that the game meat didn’t taste like what they cooked at home, so Leysath offered to prep their game meat and teach them how to cook it properly. He started

doing a segment on a local television news station before working on Paul James’ Home Grown Cooking on HGTV. In 2000, the Sportsman Channel (Booth #13923) came calling, and he became one of the first in the industry to focus on wild-game cooking through his television show, The Sporting Chef. With the increased interest from the public about knowing where their food comes from, the techniques that Leysath teaches fit well into this “locavore” trend. However, Leysath is the first to admit he doesn’t consider himself a foodie. “Honestly, I’m not sure why it took so long. If we’re going to harvest an animal, we need to know what to do with it,” he says. “What we have is a new group of people becoming interested in hunting because they don’t want their food coming from shrinkwrapped packages at the supermarket. These aren’t the same

types of people who have been active hunters and anglers in the past, and this is an important distinction that the industry needs to make. This is good news because there is more acceptance with hunting than ever before. “I love to take a first-time hunter on an upland bird hunt. Watching the dogs work, feeling the rush when a pheasant flushes, then putting it together in a great meal—it truly completes the cycle for these folks. We chefs live for when someone tastes something new to them and their face just lights up. That’s the victory.” That time between the field and the table is the most important when it comes to making quality game dinners. Having the right equipment—coupled with some good recipes—can make all the difference. Leysath has depended on Camp Chef for most of his outdoor cooking needs since the early days of the company. The cooking equipment, designed for

use in the field or in the backyard, allows outdoorsmen to cook their catch and/or kill, and cook it well. “Camp Chef has worked with Scott since we helped him get his first cookbook published 25 years ago,” says Brooks Hansen, publicrelations manager for Camp Chef. “His straightforward style of fish and game cooking pairs well with Camp Chef products.” “My favorite game dish? That would have to be stuffed venison backstrap, or maybe venison shanks,” Leysath says. “With venison, in particular, you need to cook it on the grill at a high temperature to a medium rare, or you need to braise it low and slow. Anything in between doesn’t work.” Is the locavore movement more than simply a fad? Who knows, but capitalizing on the trend is good for the future of the industry. And with pioneers like Scott Leysath and Camp Chef, hopefully there will be more people living la vida locavore.

The daily news of the 2018 Las Vegas SHOT Show Brought to You by the Bonnier Corporation and the NSSF. 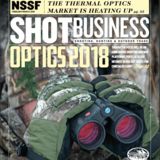