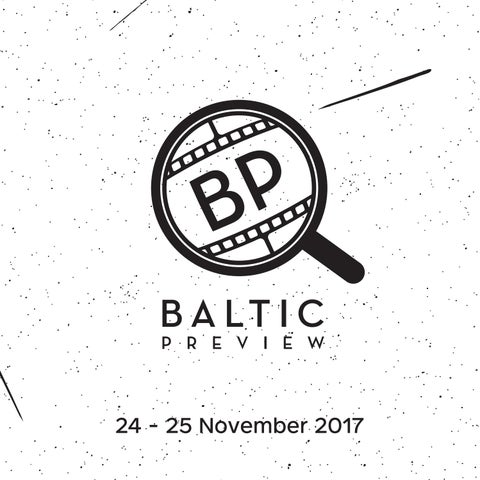 Creative Gate - Development Centre of Creative Industries In collaboration with creative and service sector partners, Creative Gate is developing an international platform as a gateway to film and audiovisual industry, the central export marketing channel of which is the annual Industry@Tallinn, a part of Tallinn Black Nights Film Festival and POFF Shorts. The idea behind the platform is to provide new growth and export opportunities for film industry and related creative industries like film production, post-production, film music, design, cast, short film and animation, through the international film industry. A series of exciting events will take place in November this year, but the main activities are planned to take place over the next two years. The project is supported in the amount of 300 000 EUR by the European Regional Development Fund.

WELCOME TO BALTIC PREVIEW! Baltic Preview is a brand new mini-market and networking event for film professionals within the framework of POFF Shorts, initiated and coordinated by ShortEst | Estonian Short Film Center. Its goal is to be a representational and lobbying event for Baltic short films on an international level. During the 2-day event we showcase around fifteen new short films ready for international circulation from Baltic countries to our invited guests: international programmers and film experts; in addition we organise roundtables to discuss short film production, distribution and financing strategies to share experience. We encourage you to get connected, jingle, mingle and twinkle: participate in the panel discussions and celebrate the opportunity to be surrounded by professionals.

Films: Maria and the Seven Dwarfs 12’

How Can Festivals Discover the Next Generation of Filmmakers? Niv Fux (Israel)

Studio presentation: New Austrian Animation Austria Johannes Schiehls will give an overview of the history of animation in Austria, talking about the local funding situation and the ways of connecting Austria to the European co-production network. He will introduce his studio “Neuer Österreichischer Trickfilm” a.k.a. “New Austrian Animation” as a forward-thinking example when it comes to commissioned works. “Neuer Österreichischer Trickfilm” is a Viennese animation studio focusing on narrative animated films and the creation of authentic and intelligent animated characters for film and television. The directors’ award-winning graduation shorts “Heldenkanzler,” “366 Days,” and “The Visit” premiered at the Viennese Filmcasino. Rich in their variety of style, the shorts feature Austrian milieus and characters and were all voiced by famous actors and comedians. Moving their studio to Vienna, the directors started to work on European animation productions and producing their own work, also creating animation and visual effects for Austrian, German and International movies. www.trickfilmer.at Johannes Schiehsl was born 1984 in Austria and studied traditional animation in the Czech Republic, then continued his studies at the prestigious Filmakademie Baden-Wuerttemberg. His autobiographically-inspired graduation short film „366 Days“ was selected by more than 70 international film festivals and received numerous awards and became the first animated film ever to be nominated for an Austrian Movie Award. Together with his colleagues Conrad Tambour and Benjamin Swiczinsky he founded the studio “Neuer Österreichischer Trickfilm“ which is dedicated to narrative animation films with artistic value.

In these shifting times each film requires a different strategy for distribution, but filmmakers seem to struggle to find the right way to reach their audiences. This time we are mainly asking professionals who are in the position of decision-making in film distribution outside of festival circuits, to speak their mind and share their thoughts among filmmakers and rights-holders about the future of short film; the outlook of distributing shorts; and whether their predictions of the future look grim or glorious.

Sari Volanen has worked at Yle (Finnish public television) for 30 years. During the last 18 years she has been producing shorts and documentaries in the co-production department of Yle. She is in charge of a strand called New Cinema. Sari is also a board member of Tampere Film Festival.

Eliis Pärna works as a producer at Delfi TV and is responsible for developing Delfi’s audiovisual products. Delfi is a major internet portal in the Baltics, and it ranks as the most popular website among Lithuanian and Estonian internet users. We have invited Eliis to talk about the logic behind audiovisual content online and to discuss the possibilities of digital distribution for independent short films. Siim Rohtla is the head of Forum Distribution Estonia, which is a distribution company representing Universal Pictures and Paramount Pictures in Estonia. Besides working with major Hollywood studios they get involved with helping to distribute the films of “independent” production companies. We have included Siim to help us understand the mechanisms of theatrical distribution and marketing strategies. Marianne Ostrat is an Estonian creative producer and founding partner of Alexandra Film and Fork Film Animation Studio. She co-produced the Swedish-Estonian animated short Amalimbo (2016) by Juan Pablo Libossart (Venice IFF, EFA Best Short Film Nominee 2016, Annecy IAFF) and in September 2017 premiered a new short drama Helen’s Birthday by Tanno Mee (Helsinki IFF, Scanorama, Lübeck).

Online Market T-Port How Can Festivals Discover the Next Generation of Filmmakers? Niv Fux from Israel will give a presentation of the brand new online market T-Port, which showcases new films from the finest film schools across the world, all on one online platform. This presentation is first and foremostly targeted towards film students. T-Port gathers the newest shorts, made by students in leading film schools around the globe, in one place. The platform enables film professionals to watch the films online and contact the correct owners of the films directly and easily. Its prime goal is to bridge the gap between film schools &amp; the commercial film industry. The platform was officially launched in June 2017 and currently presents approximately 250 films from 20 different film schools (among them: USC, Lodz film school, Filmakademie Baden-Wuerttemberg). It includes 200 users from the professional industry and is constantly growing. www.tportmarket.com For the past two years Niv Fux has been the Director of the Tel Aviv International Student Film Festival (TSFF), considered to be the largest student film festival in the world. Born and based in Tel Aviv, Israel, Niv completed his degree at The Steve Tisch School of Film &amp; TV. During his studies, he professionalised as an editor, editing shorts that have participated in festivals all over the globe. Niv is among the initiators and currently the director of the innovative platform T-Port, a first-of-its-kind online market for student films that showcases new works from the finest film schools across the world.

ANIDOX is a creative platform for the development and production of animated documentary projects. A laboratory, a professional training course, a residency program and masterclasses. Bringing together international film professionals to attend seminars and hands-on creative workshops. Its main goal is to foster and develop collaborations between animation and documentary creatives, and help them move further with their projects. In this compilation we will present both pitch trailers which were made during the lab, and 4 completed short films that were done at the residency. www.anidox.com Uri Kranot is a filmmaker and the main tutor and content supervisor of AniDox:Lab. Originally from Israel, Kranot has been working as an artist-inresidence at the Animation Workshop in Viborg, Denmark, where he also teaches a bachelor program and supervises graduation projects and professional courses. Kranot has given master classes and had retrospective screenings all around the world, won many international prizes and participated in numerous film festivals.

Silje is going to talk about the financing structure and co-production possibilities for short films with/in Norway. From year 2015, Silje runs the production company Alfred Film &amp; TV, that is based in the north of Norway. The companyâ&amp;#x20AC;&amp;#x2122;s main area of production is developing original content, mainly within factual entertainment and documentary series for the European market. The company also specialises in animated short films. www.alfredfilmtv.com Born in Norway, Silje BĂźrgin-Borch started her career in the film and television industry in 2005, and has produced and directed more than 100 television programs and series. In 2015 Silje founded the production company Alfred Film &amp; TV.

How will festival programming work in 2020 and how much does a short film festival need to think about its development strategies? Who is responsible for the future of short film? Is it the filmmakers, the festival programmers or the audience? Festival programmers will provide insight into their film programming practices and discuss finding “new gems” of the generation; what is essential for them in the year 2017; and what it will be like in two years’ time. What sort of struggles does a festival have to face in order to develop and educate its viewers and engage new audiences? Jukka-Pekka Laakso is the festival director of Tampere Film Festival. As festival director he shares the responsibility of strategic planning and programming with the co-director of the festival. Jukka-Pekka Laakso also acts as the executive director for Pirkanmaa Film Centre in Tampere that runs an art-house cinema, distributes films in Finland and works extensively with media education. Thom Palmen is one of the founders of the Umeå International Film Festival in Sweden. In order to help talented young filmmakers from the North of Sweden, he started his own distribution company Botnia Film. Currently working as a curator for a number of festivals and parallel to that as a producer, he is at the same time developing projects within the field of cinema. Since April 2017 he has been the Executive Director of the Hancheng Jinzhen International Short film Festival. Doris Bauer is the head curator of the international competition of Fiction &amp; Documentary at VIS Vienna Shorts; spokeswoman of the Austrian Film Festival Forum, and film curator and cultural manager. She studied political science at the University of Vienna. Until 2014 she was co-founder and director of the independent DVD rental store Filmgalerie 8½ and the short film festival Espressofilm in Vienna. In 2012 she co-founded the Film Festival Forum, an association of 22 film festivals in Austria. Matea Milić joined the production company Hulahop, which is the organiser of the World Festival of Animated Film - Animafest Zagreb, in 2012. She was in charge of film distribution and audience development activities before becoming Festival Producer in 2015.