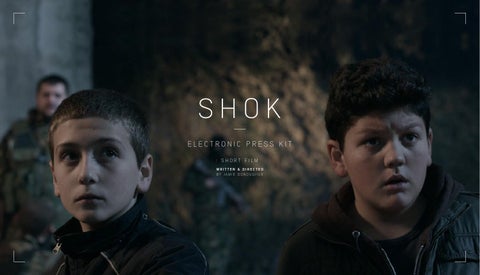 Based on true events, ‘Shok’ is set during the

However with tensions and violence escalating in the

escalation of the Kosovan War when the country

country, many would see this as traitorous.

was occupied by Serbia... Building a steady network of contacts, Petrit drags Oki into Two young Kosovan boys, Petrit and Oki, are the best of

ever more dangerous situations until their lives are put at

friends. After Oki buys a bike, Petrit is desperate to have

risk. As their relationship is tested to the limits they begin

one of his own. Ever the businessman Petrit finds a niche

to encounter the true intentions of the Serbians and learn

the meaning of friendship.

Based on true events, ‘Shok’ is set during the escalation of

Days later we see both boys on a bus traveling to school. The

the Kosovan war when the country was occupied by Serbia...

bus is stopped at a checkpoint. The soldiers discover Kosovan books in Oki’s bag, this combined with the inability to speak

Two young Kosovan boys, Petrit and Oki are the best of friends.

Serbian means Oki is in serious trouble. At the last moment

After Oki buys a bike, Petrit is desperate to have one of his

Petrit speaks up and takes responsibility for the books in

own. Ever the businessman Petrit finds a niche dealing smoking

order to protect his friend. The boys reconcile, realising their

papers to the Serbian troops. However with tensions and violence

friendship is more important than any possession.

escalating in the country, many would see this as traitorous. Oki stays over at Petrit’s house, the best of friends again. Building a steady network of contacts, Petrit drags Oki into

is ‘justice’. Lucky to get away with their lives and losing the one possession that means everything to him, the boys friendship looks doomed forever.

Based on true events, ‘Shok’ is set during the run up to the

his Serbian nephew, which he feels is 'justice'. Lucky to get

Kosovo war when the country was occupied by Serbia...

away with their lives and losing the one possession that means everything to him, Oki is distraught. Screaming at

Two young boys, Petrit and Oki, are the best of friends.

Living in relative poverty Oki has worked solidly for the last year to save up enough money to buy a bicycle. Petrit,

Petrit tries everything to make up with Oki but fears he

desperate to earn enough money to also get a bike, finds

has lost his friend. Days later we see both boys on a bus

a niche in the market dealing smoking to the Serbian

traveling to school. The bus is stopped at a checkpoint,

soldiers. This is a risky business, with tensions and violence

everyone is removed and lined up outside for questioning.

escalating in the country, many would see dealing with the

Petrit recognises Dragan there. The soldiers then discover

Kosovan books in Oki’s bag, this combined with the inability to speak Serbian means Oki is in serious trouble. At the last

Using Oki’s bike, Petrit begins to build up a network of

moment Petrit speaks up and takes responsibility for the

books in order to protect his friend. Dragan walks over to

what is going on and is extremely sceptical. He knows how

Petrit and beats him whilst the other children watch.

dangerous this can be. Petrit assures him he knows what he is doing and just in case things did get out of hand he

Later that day Petrit finds Oki waiting outside his house.

lets Oki into his little secret, which he hides in his bedroom

The boys reconcile, realising their friendship is more

important than any possession.

Petrit convinces Oki to come with him for a ‘deal’ after

Oki stays over at Petrit’s house, the best of friends again.

smoothly this one feels wrong from the outset. Meeting with

a group of soldiers, one in particular takes offense to the

boys. Spotting Oki’s bike he takes it for himself to give to

It is a story like many others, the trials and tribulations of

What interested me more than the events themselves were

children all across the world, however it is set in the most

the personal stories of the people; the challenges they

faced on a daily basis, the horrors endured and more so the overwhelming desire to move forward. People who were now

Four years ago I visited Kosovo for a few days, then the

Icelandic Volcano erupted. I found myself stranded for five

weeks in a country I knew nothing about and a language I could not speak. I was quickly immersed into this new

My challenge was not to make the film a political statement,

culture and was instantly accepted by the people. Slowly

rather to simply tell a story. This is a film that will hopefully

learning about their history I was appalled that I, like the

majority of British people, knew very little of the events that

can be so different, but yet in many ways so similar.

‘Shok’ is Jamie’s directorial drama debut. He is an experienced director and producer of music videos. Previously signed to Academy Films he then went on to set up his own production company Left Eye Blind, working extensively across Europe and the USA. He began exploring the Balkan area realising the potential for filmmaking in these fledgling regions. With a passion to move into film Jamie became a freelance director in late 2013. ‘Shok’ is his first solo film project.

Howard’s career in film and TV has spanned over 30 years. He was previously the Operations Manager at Film Lab North, providing post production finishing to ITV’s internal drama and documentaries. 100 million feet of film later and Howard moved on to become an Independent Producer with his first feature film “Confession” gaining distribution across the United States. Howard continues to work as a producer, consultant, mentor and industry coach.

Harvey has produced a number of international projects, including a co production between Albania and the UK. He has worked in TV drama, short and feature films, music videos and commercials. He has premiered and distributed films across the world at events which include Toronto Film Festival, Cannes Film Festival and London Film Festival. Harvey has been Jamie’s producer for 4 years providing a strong producer/ director relationship.

Eshref is one of Kosovo’s most renowned actors, playing in numerous TV series, theatre productions and feature films across the Balkans. Best known for the lead role in the feature film Eduart, Eshref grew up in Kosovo experiencing first hand many of the issues raised in this short. He has worked extensively with Jamie to create an accurate interpretation of the script. Eshref plays a leading role and is also a co-producer and representative for the Kosovan production.

Philip is a Scottish born DOP who trained at the Russian State Institute of Cinematography, Moscow and is a graduate of the Northern Film School, UK. He has an impressive international body of work ranging from Feature Films to TV Drama and Commercials. Philip has won two prestigious Kodak Vision awards for cinematography, one for his first feature “Beyond the Ocean” (2000), the other for the critically acclaimed “Frozen” (2005).

James is a highly regarded emerging cinematographer in his own right. Known for his work in music videos and commercials, ‘Shok’ was a unique opportunity to work with the highly experienced DOP Phil Robertson.

Sarah and Jamie have had a strong working relationship for over 5 years. A graduate of the Northern Film School she has established herself as a talented emerging editor within the industry.

James has created videos for many artists including The Charlatans, Susan Boyle, The Vaccines as well as commercials for American Eagle, 888 Casino and The Sun.

At the age of 23 she has already edited videos for numerous mainstream artists, created promos for clients including Spotify and 4play and worked on award winning drama’s including ITV’s ‘Last Tango in Halifax’ and Channel 4’s ‘Utopia’.

Trimor is one of the most established composers in the Balkans working on over eighty productions in both Film and Theatre. A talented pianist, he has performed at many live events including Kosovo’s National Ballet. Trimor splits his time between original compositions and teaching at the State University of Prishtina and Peja. His awards include, First Prize in National Theatre Festival (Kosovo), Two times winner for Short Film in 9/11 Film Festival and Winner of the AFW Prize at the New York Feature Film Festival.

A U R I TA AGUSHI

| “The meaning of the music”

alone. After, locals came to visit the set to exchange their

The music used in this film is traditional Kosovan music.

own personal stories and thanked the production team for

When searching for the sound track we wanted to

embarking on such a project.

encompass something that was true to the country and

the time. The music is actually a lullaby that was sang by

“The town of Tuneli i Pare, Mitrovica”

mothers to the children at bedtime during the war. The

The majority of Kosovo was location scouted in order to

lyrics speak of growing up and becoming man.

find the perfect place to shoot the film. On visiting Tuneli i Pare we knew instantly this was the place. A once vibrant

The film is based on true events and the team were

Our composer Trimor Dhomi travelled to the remote villages

and affluent area it had been lost in time since the war. No

extremely conscious of reflecting this in an accurate and

in the mountains of Kosovo, searching out the lost voices

development has meant that it was true reflection of the

sensitive way. The story of Petrit at the checkpoint actually

of woman, many of whom had not sung since the war. The

90’s architecture. Mitrovica itself is also the last area of

happened to our actor Eshref Durmishi as a school boy. The

vocals were recorded in location in the village homes.

director decided to offer him the part of Dragan; the soldier that beats the Petrit. This was a challenging role for Eshref, playing the character of someone who he was once a victim to in real life. However Eshref jumped at the chance feeling that he could bring an honest and true representation of the event as well as offering him a degree of closure. Nearly all of the Kosovan actors and crew were subjected first hand to the atrocities and issues raised in this film.

divide between Serbs and Kosovans. “The Arkan Raid Scene” This was one of the most emotional and physically difficult

The entire shoot was done within a 3 mile radius. We were

scenes to film. The Arkan’s were Milosevic’s private armies

overwhelmed by the support of the town. Every extra in

and responsible for some of the worst atrocities. Everyone

the film is from the town, including all the school children.

in Kosovo has in one way been affected by their actions. We

Many of the assistant crew were also employed from the

needed to be true to the history and capture the moment

local area. Everyday we would have huge crowds of people

in a meaningful and honest way. On the first rehearsal we

watching the shoot for hours on end, each going out of their

did not know what to expect. We ran the scene through. The

way to help and support us wherever they could. It was

atmosphere was truly harrowing. On exiting the house were

an incredible family atmosphere that few of us had every

The majority of the cast, crew and onlookers were physically shaken and in tears just from hearing the sounds 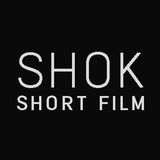