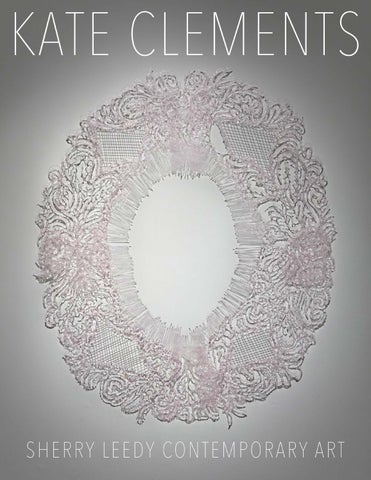 Fa | eint “Oh, be careful — if you breathe, it breaks!” —The Glass Menagerie, scene iv Like the boxer’s bluff, we play our fashions in feints. We turn illusionists. We cast characters from closets, masking and making, tidying our ticks. But how easy we are played in turn — how easy we fill in what we’ve drawn out. Fashions join and split us. They make us experts and idiots, they veil and reveal us, they ease us, tease us, and deceive us. And how faint these feints — fashions fall as easy from shoulder as from favor. Left as echoes down marble halls, as the wizard’s curtain strewn across the floor, as banners and billboards with colors run dry, decrees in liquid crystal turned kitsch and back again. How easy all the magic reveals itself to be a game of mirrors. Clements’ glass works are as potent in these delicacies as they are in form. Crowns — wreaths so revered, coveted, and condemned that the heavy heads on which they rest have themselves fallen from shoulder. Frames, walls, and the folds we follow that might shatter at a breath. Ornaments beyond nature, transparent and fragile. By Henry Fording Eddins

The physical quality of Kate Clements glassworks seems as delicate and ephemeral as a thought or whim. It’s as if her wall of glass, Thicket, or her crowns and veils defy expectation. They call to mind historical references of elegant ornament, adornment, fashion and ceremony. Visually they belie the hand of the maker and seem to have materialized independent of human intervention as if from an uncommon natural phenomenon. Like a spider’s web covered with dew or an icicle on a warm day, the seeming fragility of the material emphasizes the folly of their form, exposing their fragile and temporal vanity. Of Clements’s crowns, she has said, “I am interested in women’s attempts to fit popular cultural representation and how often this results in a suspension of their critical self-awareness. How women’s efforts to fulfill these representations can lead to feelings of guilt and the simultaneous assertion of individual power and the creation of a ‘feminine mystique.’ Finally I am interested in the adornments of the celebration of the ‘perfect’ woman. These celebrations can include beauty queens, exotic dancers, and ironically in it’s most extreme manifestation: the bride.” Kate Clements holds a BFA from the Kansas City Art Institute, MO and an MFA from Tyler School of Art, Temple University, Philadelphia, PA. Her glass crowns have been featured in Italian Vogue magazine and she is currently a 2015 recipient of a Museum of Arts and Design residency in New York, NY.