This report is presented in praise and thanksgiving to God for His goodness and guiding hand in establishing and sustaining Shenandoah Valley Academy for 109 years. May it bring honor and glory to His marvelous works. It is dedicated with gratitude to those who have provided the vision and leadership to place Shenandoah on a pathway to becoming a sustainable Adventist academy: Dr. Dale Twomley, principal and business manager during the year covered in this report; and to our loyal and generous Alumni and Friends whose financial gifts sustain the students and educational ministry of this school.

There is nothing better than young people choosing Jesus! 22 young people have been baptized at SVA since May 2016. Currently 27 are requesting to study for baptism. Pictured: Christian Sanchez ‘17, Maddy Ndahayo ‘17, Jason Khargie ‘17, Chaplain Tim Harley, Laura Westberg ‘19

Notes from Our Principal: The Business of Shenandoah Valley Academy

Giving to Shenandoah: Your Gifts Make a Difference

From Our Development Director: A Gift is Placed by God’s Own Hand

Notes from our Principal:

The Business of Shenandoah Valley Academy What a privilege to lead Shenandoah Valley Academy (SVA), a school which exists to provide a distinctly Seventh-day Adventist college preparatory program through experiences to produce disciples of Jesus who are compassionate citizens prepared for college and careers. This is the BUSINESS of Shenandoah Valley Academy. We praise God for His blessings and gifts for debt reduction from a handful of generous Alumni and Friends who together eliminated $1.4 million in debt. On April 7, then principal Dr. Dale Twomley handed a check for $303,000 to the treasurer of the Potomac Conference and our school debts were paid in full! Donald Short, Principal

Our Mission: Shenandoah Valley Academy, established in 1908, exists to provide a distinctly Seventh-day Adventist college preparatory program through experiences to produce disciples of Jesus who are compassionate citizens prepared for college and careers.

Our Vision: Graduating Adventist Christians who will...

Today we praise God for His blessings and an operating increase of more than $1 million for FY 2016, more than $1.5 million for FY 2015 and 2016 combined. While we are a “Not-forprofit” business, we must operate profitably. We have been able to do just that as a result of an extraordinary year of giving highlighted by a dramatic increase--primarily in unrestricted and worthy student gifts from individuals—with an amazing 1320 total individual gifts! We are blessed to witness God work through our Alumni and Friends who are pulling together to invest in this special school and its students. In addition to eliminating long-term debt and debt payments, investors enabled SVA to set aside cash reserves to sustain the school during the lean summer months. Because of your generosity, SVA can pledge that “no qualified student will be turned away from SVA because of finances.” Gifts to SVA helped provide nearly $1 million in scholarships and worthy student grants to qualified students last school year! Your gift dollars make it possible for students who otherwise would not be able to attend, to come to SVA. For the 2016-17 school year, enrollment is up and students are thriving. Currently charitable gifts provide 38% of our operating budget. Parents pay tuition and fees, the Potomac Conference gives us nearly $900,000 in operating subsidy each year, but it is our Alumni and Friends who bring it all together to make the business of SVA operate successfully. Shenandoah Valley Academy is a sustainable Adventist academy because so many individuals have pulled together to make this a school where students want to come to grow in their relationship with Jesus, achieve academically, and develop life-long Christian friendships. These are the reasons why the ongoing financial investment of our Alumni and Friends matters so much. You will be encouraged and inspired reading this report. Bask in how God has extended grace and mercy through your financial gifts and the leadership of many individuals to make SVA strong and wonderful today. Please continue to hold up SVA in praise and prayer to God for all He has done and will do. Beautiful Shenandoah, established by a selfless gift, preserved for generations by God’s faithfulness, saved by grace, extending the love of Jesus to young people, preparing them to serve as His disciples and expand His Kingdom. Praise God, there is no better return on investment!

History and Setting Shenandoah Valley Academy was established by a 40-acre bequest from founder Charles Zirkle, opening in the fall of 1908 and graduating the first senior class in 1911. SVA has a total of 5228 graduating alumni. Set in the heart of the Shenandoah Valley on 450 acres of fertile valley land with the Shenandoah River forming its western border, SVA offers a rural environment for Christian education. The academy is located on Route 211 one mile west of New Market, Virginia (population 1,732) and I-81 Exit 264, between Winchester and Harrisonburg. The historic Civil War Battle of New Market was fought two miles away in May 1864.

The SVA family looks on as Principal Don Short and Dr. Dale Twomley release homing pigeons to symbolize releasing our graduates to “fly high” in pursuit of the life God has planned for them, with Jesus and heaven their ultimate destination.

Giving to Shenandoah Shenandoah Valley Academy relies on philanthropy, charitable financial gifts from “outside sources”— Alumni and Friends, foundations, churches, and businesses--to cover approximately 38% of the total operating budget which funds the education of our students. And you responded, helping SVA finish the fiscal year July 1, 2015 to June 30, 2016 with an all-time record of 1539 gifts to Shenandoah’s annual fund. Thank you for each treasured gift. To our students and the entire SVA family, they are evidence of God’s grace and mercy extended through you to save and sustain the educational ministry of this legacy school which has blessed generations, and with your generosity and His blessings will continue to prepare disciples of Jesus until the day He comes. Our prayer is one of humble thanksgiving, and a petition for God’s richest blessings to be poured out on each giving individual, family, church, business and foundation.

FY 2016 Giving Highlights: •100% giving by SVA Faculty and Staff •100% giving by SVA Board of Trustees •Remaining pledge payments of $300,000 for debt reduction resulted in elimination of SVA long-term debt and debt payments •$170,000 year-end Matching Grant Challenge by generous alumni wanting to give back to SVA resulted in a total $375,000 in unrestricted and worthy student Match Appeal gifts •Banner year for Alumni and Friends* giving participation, with all-time record of 1320 gifts from individuals accounting for 86% of all gifts, and well over half of total charitable gift income *Bolded names on alumni and individual giving lists indicate three or more years consecutive giving

Your Gifts Make a Difference 4

From Our Director of Development & Alumni Relations: A Gift is Placed by God’s Own Hand

Where shines the Big Virginia Sun! And old Dominion’s streamlets run, From out the Massanutt’s cool shade, And down great Alleghany’s glade, God’s works in nature multiplied, Extol His name on ev’ry side. We’re singing “Where shines the Big Virginia Sun!” with more enthusiasm and confidence than ever before. Shenandoah is a God-ordained school which He sustains. For 109 years and this year, we see Him working; His blessings and sustaining mercy poured out through so many of YOU joining together to financially support SVA and its students. Please know your giving makes all the difference, and it is because of your generosity through regular financial support that our SVA kids and school program are thriving! Thank you!! At 2016 registration, Principal Short asked all new and returning students, “What brought you to SVA?” It’s no surprise the majority responded with mom, dad, grandparent, sibling, aunt, uncle, cousin—or all of them— graduated from Shenandoah. This is a family school – generations have studied, worshiped and played together on this campus. These are our very own SVA kids. Your gift dollars – our combined gifts -- support the young people who are at SVA preparing for college and careers through experiences that produce disciples of Jesus. As soon as a student walks through the SVA door… well, you already know …they become ours and we cannot turn away. They become our very own. In nature’s dooryard neatly planned, A gift is placed God’s own hand The S.V.A. of sacred birth, Our own dear school of sterling worth Whose beacon lit by gospel truth, Sheds holy light on paths of youth.

God established our beloved school in the beauty of the Valley— in the center of the palm of His hand. He has blessed generations of graduates not only with an education and life-long abiding love and loyalty to each other and this school, but also with a generous giving spirit. We support our school and our SVA kids in the tradition of the founding bequest which established this school. SVA Adventist boarding school education is still relevant and perhaps more than ever before, creating a place where young people who want to know and love Jesus can prepare to serve and love a hurting world. What blighting frost can chill our zeal, Or evil’s fury ever deal A blow in madness fit to shake, Our faith in thee O S.V.A.? Or cause our strength in future time, To [fail] before thy cause sublime? When it appears mounting challenges pose a threat to the very existence of this Adventist boarding academy, you, loyal Alumni and Friends, have heroically stepped forward to pay debts and financially invest in the SVA educational ministry. Your unrestricted and worthy students gifts are changing lives. Thank you for standing by your school and our SVA kids.

Objective Academics: Class of 2018 juniors Taylor Belleza, Miranda Benton, Allie Magtanong and Valerie Pichot are meeting the challenge of Shenandoahâ&#x20AC;&#x2122;s rigorous college preparatory curriculum. Last February they were among the students recognized for academic excellence, leadership and character as inductees of the SVA chapter of the National Honor Society.

Changes made in purchasing and food preparation to offer students local fresh produce and whole foods, combined with a newly renovated cafeteria made possible by an alumni estate gift and anonymous donation for carpet, have reinvigorated the food service program. The fresh, nutritious diet is making a difference in the overall health and wellness of students.

Whole grain rolls ready to go into the oven

$880,131.00 Truckload of fruits and vegetables from the Shenandoah Valley Produce Auction

We can never forget what has been done here on this campus for the Kingdom of God.

It is for us to be dedicated to the unfinished task of training disciples of Jesus as fast as we can, to the great task of preaching the Gospel of Jesus. We here highly resolve that those who have gone before us and who still labor in this vineyard shall not have worked in vain. Rather that this school, under God, shall have a new birth of commitment, that Shenandoah Valley Academy, its students, faculty and staff, alumni, and constituents, all shall take on the armor of Salvation and finish the task our Lord and Savior, Jesus Christ, has set before us. Dr. Dale E. Twomley Gettysburg Address paraphrase (excerpt) Twomley Hall Dedication, May 28, 2016

WEEKEND A P R I L

I’ll make a list of God’s gracious dealings, all the things God has done that need praising, All the generous bounties of God, His great goodness… --Compassion lavished, love extravagant. He said, “Without question these are my people, children who would never betray me.” So He became their Savior. In all their troubles, He was troubled, too. He didn’t send someone else to help them. He did it himself, in person. Out of His own love and pity He redeemed them. He rescued them and carried them along for a long, long time. Isaiah 63:7 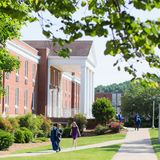