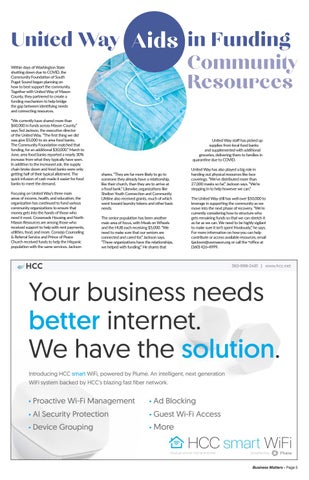 United Way Aids in Funding Community Resources Within days of Washington State shutting down due to COVID, the Community Foundation of South Puget Sound began planning on how to best support the community. Together with United Way of Mason County, they partnered to create a funding mechanism to help bridge the gap between identifying needs and connecting resources.

“We currently have shared more than $60,000 in funds across Mason County,” says Ted Jackson, the executive director of the United Way. “The first thing we did was give $5,000 to six area food banks. The Community Foundation matched that funding, for an additional $30,000.” March to June, area food banks reported a nearly 30% increase from what they typically have seen. In addition to the increased ask, the supply chain broke down and food banks were only getting half of their typical allotment. The quick infusion of cash made it easier for food banks to meet the demand. Focusing on United Way’s three main areas of income, health, and education, the organization has continued to fund various community organizations to ensure that money gets into the hands of those who need it most. Crossroads Housing and North Mason Resources are among those who received support to help with rent payments, utilities, food, and more. Consejo Counseling & Referral Service and Prince of Peace Church received funds to help the Hispanic population with the same services. Jackson

United Way staff has picked up supplies from local food banks and supplemented with additional groceries, delivering them to families in quarantine due to COVID. shares, “They are far more likely to go to someone they already have a relationship, like their church, than they are to arrive at a food bank.” Likewise, organizations like Shelton Youth Connection and Community Lifeline also received grants, much of which went toward laundry tokens and other basic needs. The senior population has been another main area of focus, with Meals on Wheels and the HUB each receiving $5,000. “We need to make sure that our seniors are connected and cared for,” Jackson says. “These organizations have the relationships, we helped with funding.” He shares that

United Way has also played a big role in handing out physical resources like face coverings. “We’ve distributed more than 27,000 masks so far,” Jackson says. “We’re stepping in to help however we can.” The United Way still has well over $50,000 to leverage in supporting the community as we move into the next phase of recovery. “We’re currently considering how to structure who gets remaining funds so that we can stretch it as far as we can. We need to be highly vigilant to make sure it isn’t spent frivolously,” he says. For more information on how you can help contribute or access available resources, email tjackson@uwmason.org or call the woffice at (360) 426-4999. 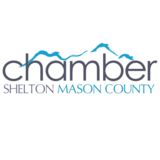