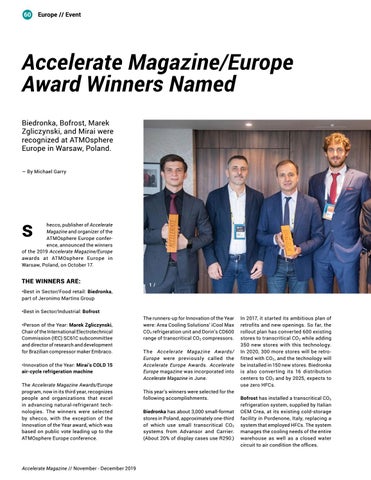 •Best in Sector/Food retail: Biedronka, part of Jeronimo Martins Group •Best in Sector/Industrial: Bofrost •Person of the Year: Marek Zgliczynski, Chair of the International Electrotechnical Commission (IEC) SC61C subcommittee and director of research and development for Brazilian compressor maker Embraco. •Innovation of the Year: Mirai’s COLD 15 air-cycle refrigeration machine The Accelerate Magazine Awards/Europe program, now in its third year, recognizes people and organizations that excel in advancing natural-refrigerant technologies. The winners were selected by shecco, with the exception of the Innovation of the Year award, which was based on public vote leading up to the ATMOsphere Europe conference.

The runners-up for Innovation of the Year were: Area Cooling Solutions’ iCool Max CO 2 refrigeration unit and Dorin’s CD600 range of transcritical CO 2 compressors. The Accelerate Magazine Awards/ Europe were previously called the Accelerate Europe Awards. Accelerate Europe magazine was incorporated into Accelerate Magazine in June. This year’s winners were selected for the following accomplishments. Biedronka has about 3,000 small-format stores in Poland, approximately one-third of which use small transcritical CO 2 systems from Advansor and Carrier. (About 20% of display cases use R290.)

In 2017, it started its ambitious plan of retrofits and new openings. So far, the rollout plan has converted 600 existing stores to transcritical CO 2 while adding 350 new stores with this technology. In 2020, 300 more stores will be retrofitted with CO 2 , and the technology will be installed in 150 new stores. Biedronka is also converting its 16 distribution centers to CO 2 and by 2025, expects to use zero HFCs. Bofrost has installed a transcritical CO 2 refrigeration system, supplied by Italian OEM Crea, at its existing cold-storage facility in Pordenone, Italy, replacing a system that employed HFCs. The system manages the cooling needs of the entire warehouse as well as a closed water circuit to air condition the offices.

With special coverage of the Kigali Amendment to the Montreal Protocol, the November-December 2019 issue of Accelerate Magazine takes stock of the global HFC-reduction amendment as it approaches the end of its first year, and addresses whether it goes fast and far enough given the urgency of the climate crisis. Also in the November-December 2019 issue, regional articles on: U.S. supermarket chains Publix and Kroger’s QFC division; a Colombian Makro store; European retailers METRO AG, Carrefour Poland and Sainsbury; an African training center; ammonia/CO2 and propane in Australia, Japan’s hydrocarbon safety standards and special initiatives in Thailand and the Philippines. Global trend articles include an update on the SolarChill program, and the latest from thought leaders Armin Hafner, Toby Peters and Kiyoshi Saito.