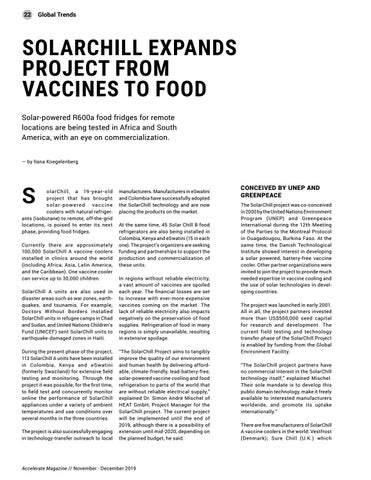 SOLARCHILL EXPANDS PROJECT FROM VACCINES TO FOOD Solar-powered R600a food fridges for remote locations are being tested in Africa and South America, with an eye on commercialization. — by Ilana Koegelenberg

olar Chill , a 19 - year- old project that has brought s o l a r - p o w e r e d va c c i n e coolers with natural refrigerants (isobutane) to remote, off-the-grid locations, is poised to enter its next phase, providing food fridges. Currently there are approximately 100,000 SolarChill A vaccine coolers installed in clinics around the world (including Africa, Asia, Latin America, and the Caribbean). One vaccine cooler can service up to 30,000 children. SolarChill A units are also used in disaster areas such as war zones, earthquakes, and tsunamis. For example, Doctors Without Borders installed SolarChill units in refugee camps in Chad and Sudan, and United Nations Children's Fund (UNICEF) sent SolarChill units to earthquake-damaged zones in Haiti. During the present phase of the project, 113 SolarChill A units have been installed in Colombia, Kenya and eSwatini (formerly Swaziland) for extensive field testing and monitoring. Through the project it was possible, for the first time, to field test and concurrently monitor online the performance of SolarChill appliances under a variety of ambient temperatures and use conditions over several months in the three countries. The project is also successfully engaging in technology-transfer outreach to local

manufacturers. Manufacturers in eSwatini and Colombia have successfully adopted the SolarChill technology and are now placing the products on the market. At the same time, 45 Solar Chill B food refrigerators are also being installed in Colombia, Kenya and eSwatini (15 in each one). The project’s organizers are seeking funding and partnerships to support the production and commercialization of these units. In regions without reliable electricity, a vast amount of vaccines are spoiled each year. The financial losses are set to increase with ever-more-expensive vaccines coming on the market. The lack of reliable electricity also impacts negatively on the preservation of food supplies. Refrigeration of food in many regions is simply unavailable, resulting in extensive spoilage. “The SolarChill Project aims to tangibly improve the quality of our environment and human health by delivering affordable, climate-friendly, lead-battery-free, solar-powered vaccine cooling and food refrigeration to parts of the world that are without reliable electrical supply,” explained Dr. Simon André Mischel of HEAT GmbH, Project Manager for the SolarChill project. The current project will be implemented until the end of 2019, although there is a possibility of extension until mid-2020, depending on the planned budget, he said.

CONCEIVED BY UNEP AND GREENPEACE The SolarChill project was co-conceived in 2000 by the United Nations Environment Program (UNEP) and Greenpeace International during the 12th Meeting of the Parties to the Montreal Protocol in Ouagadougou, Burkina Faso. At the same time, the Danish Technological Institute showed interest in developing a solar powered, battery-free vaccine cooler. Other partner organizations were invited to join the project to provide much needed expertise in vaccine cooling and the use of solar technologies in developing countries. The project was launched in early 2001. All in all, the project partners invested more than US$500,000 seed capital for research and development. The current field testing and technology transfer phase of the SolarChill Project is enabled by funding from the Global Environment Facility. “The SolarChill project partners have no commercial interest in the SolarChill technology itself,” explained Mischel. Their sole mandate is to develop this public domain technology, make it freely available to interested manufacturers worldwide, and promote its uptake internationally.” There are five manufacturers of SolarChill A vaccine coolers in the world: Vestfrost (Denmark); Sure Chill (U.K.) which