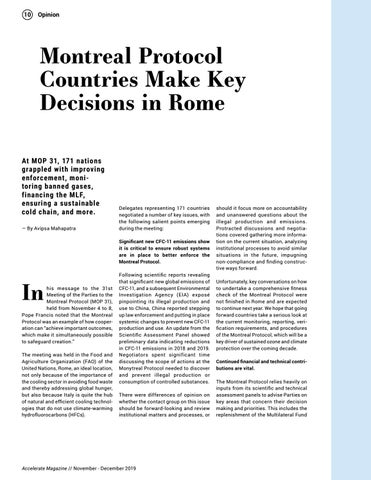 Delegates representing 171 countries negotiated a number of key issues, with the following salient points emerging during the meeting: Significant new CFC-11 emissions show it is critical to ensure robust systems are in place to better enforce the Montreal Protocol.

his message to the 31st Meeting of the Parties to the Montreal Protocol (MOP 31), held from November 4 to 8, Pope Francis noted that the Montreal Protocol was an example of how cooperation can “achieve important outcomes, which make it simultaneously possible to safeguard creation.” The meeting was held in the Food and Agriculture Organization (FAO) of the United Nations, Rome, an ideal location, not only because of the importance of the cooling sector in avoiding food waste and thereby addressing global hunger, but also because Italy is quite the hub of natural and efficient cooling technologies that do not use climate-warming hydrofluorocarbons (HFCs).

Following scientific reports revealing that significant new global emissions of CFC-11, and a subsequent Environmental Investigation Agency (EIA) exposé pinpointing its illegal production and use to China, China reported stepping up law enforcement and putting in place systemic changes to prevent new CFC-11 production and use. An update from the Scientific Assessment Panel showed preliminary data indicating reductions in CFC-11 emissions in 2018 and 2019. Negotiators spent significant time discussing the scope of actions at the Monytreal Protocol needed to discover and prevent illegal production or consumption of controlled substances. There were differences of opinion on whether the contact group on this issue should be forward-looking and review institutional matters and processes, or

should it focus more on accountability and unanswered questions about the illegal production and emissions. Protracted discussions and negotiations covered gathering more information on the current situation, analyzing institutional processes to avoid similar situations in the future, impugning non-compliance and finding constructive ways forward. Unfortunately, key conversations on how to undertake a comprehensive fitness check of the Montreal Protocol were not finished in Rome and are expected to continue next year. We hope that going forward countries take a serious look at the current monitoring, reporting, verification requirements, and procedures of the Montreal Protocol, which will be a key driver of sustained ozone and climate protection over the coming decade. Continued financial and technical contributions are vital. The Montreal Protocol relies heavily on inputs from its scientific and technical assessment panels to advise Parties on key areas that concern their decision making and priorities. This includes the replenishment of the Multilateral Fund