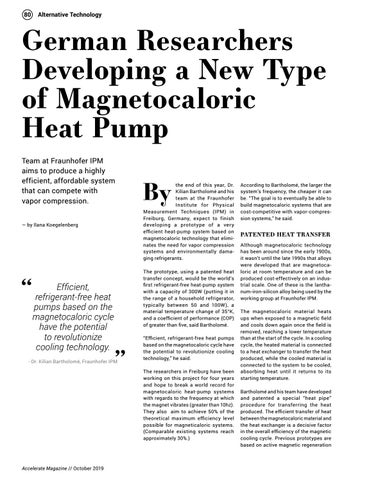 the end of this year, Dr. Kilian Bartholomé and his team at the Fraunhofer Institute for Physical Measurement Techniques (IPM) in Freiburg, Germany, expect to finish developing a prototype of a ver y efficient heat-pump system based on magnetocaloric technology that eliminates the need for vapor compression systems and environmentally damaging refrigerants. The prototype, using a patented heat transfer concept, would be the world’s first refrigerant-free heat-pump system with a capacity of 300W (putting it in the range of a household refrigerator, typically between 50 and 100W), a material temperature change of 35°K, and a coefficient of performance (COP) of greater than five, said Bartholomé. “Efficient, refrigerant-free heat pumps based on the magnetocaloric cycle have the potential to revolutionize cooling technology,” he said. The researchers in Freiburg have been working on this project for four years and hope to break a world record for magnetocaloric heat-pump systems with regards to the frequency at which the magnet vibrates (greater than 10hz). They also aim to achieve 50% of the theoretical maximum efficiency level possible for magneticaloric systems. (Comparable existing systems reach approximately 30%.)

According to Bartholomé, the larger the system’s frequency, the cheaper it can be. “The goal is to eventually be able to build magnetocaloric systems that are cost-competitive with vapor-compression systems,” he said.

PATENTED HEAT TRANSFER Although magnetocaloric technology has been around since the early 1900s, it wasn’t until the late 1990s that alloys were developed that are magnetocaloric at room temperature and can be produced cost-effectively on an industrial scale. One of these is the lanthanum-iron-silicon alloy being used by the working group at Fraunhofer IPM. The magnetocaloric material heats ups when exposed to a magnetic field and cools down again once the field is removed, reaching a lower temperature than at the start of the cycle. In a cooling cycle, the heated material is connected to a heat exchanger to transfer the heat produced, while the cooled material is connected to the system to be cooled, absorbing heat until it returns to its starting temperature. Bartholomé and his team have developed and patented a special “heat pipe” procedure for transferring the heat produced. The efficient transfer of heat between the magnetocaloric material and the heat exchanger is a decisive factor in the overall efficiency of the magnetic cooling cycle. Previous prototypes are based on active magnetic regeneration