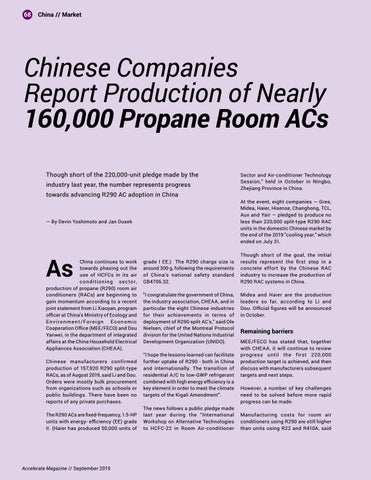 Chinese Companies Report Production of Nearly 160,000 Propane Room ACs Though short of the 220,000-unit pledge made by the industry last year, the number represents progress towards advancing R290 AC adoption in China

— By Devin Yoshimoto and Jan Dusek

China continues to work towards phasing out the use of HCFCs in its air c o n di ti o n i n g se c to r, production of propane (R290) room air conditioners (RACs) are beginning to gain momentum according to a recent joint statement from Li Xiaoyan, program officer at China&#39;s Ministry of Ecology and E nv i r o n m e n t / F o r e i g n E c o n o m i c Cooperation Office (MEE/FECO) and Dou Yanwei, in the department of integrated affairs at the China Household Electrical Appliances Association (CHEAA). Chinese manufacturers confirmed production of 157,920 R290 split-type RACs, as of August 2019, said Li and Dou. Orders were mostly bulk procurement from organizations such as schools or public buildings. There have been no reports of any private purchases. The R290 ACs are fixed-frequency, 1.5-HP units with energy- efficiency (EE) grade II. (Haier has produced 50,000 units of

grade I EE.) The R290 charge size is around 300 g, following the requirements of China’s national safety standard GB4706.32. &quot;I congratulate the government of China, the industry association, CHEAA, and in particular the eight Chinese industries for their achievements in terms of deployment of R290 split AC&#39;s,” said Ole Nielsen, chief of the Montreal Protocol division for the United Nations Industrial Development Organization (UNIDO). “I hope the lessons learned can facilitate further uptake of R290 - both in China and internationally. The transition of residential A/C to low-GWP refrigerant combined with high energy efficiency is a key element in order to meet the climate targets of the Kigali Amendment&quot;. The news follows a public pledge made last year during the “International Workshop on Alternative Technologies to HCFC-22 in Room Air-conditioner

Sector and Air-conditioner Technology Session,” held in October in Ningbo, Zhejiang Province in China. At the event, eight companies — Gree, Midea, Haier, Hisense, Changhong, TCL, Aux and Yair — pledged to produce no less than 220,000 split-type R290 RAC units in the domestic Chinese market by the end of the 2019 &quot;cooling year,&quot; which ended on July 31. Though short of the goal, the initial results represent the first step in a concrete effort by the Chinese RAC industry to increase the production of R290 RAC systems in China. Midea and Haier are the production leaders so far, according to Li and Dou. Official figures will be announced in October.

Remaining barriers MEE/FECO has stated that, together with CHEAA, it will continue to review progress until the first 220,000 production target is achieved, and then discuss with manufacturers subsequent targets and next steps. However, a number of key challenges need to be solved before more rapid progress can be made. Manufacturing costs for room air conditioners using R290 are still higher than units using R22 and R410A, said