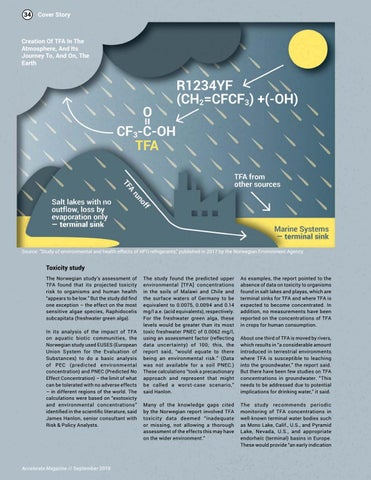 Creation Of TFA In The Atmosphere, And Its Journey To, And On, The Earth

Source: “Study of environmental and health effects of HFO refrigerants,” published in 2017 by the Norwegian Environment Agency.

Toxicity study The Norwegian study’s assessment of TFA found that its projected toxicity risk to organisms and human health “appears to be low.” But the study did find one exception – the effect on the most sensitive algae species, Raphidocelis subcapitata (freshwater green alga). In its analysis of the impact of TFA on aquatic biotic communities, the Norwegian study used EUSES (European Union System for the Evaluation of Substances) to do a basic analysis of PEC (predicted environmental concentration) and PNEC (Predicted No Effect Concentration) – the limit of what can be tolerated with no adverse effects – in different regions of the world. The calculations were based on “exotoxicty and environmental concentrations” identified in the scientific literature, said James Hanlon, senior consultant with Risk &amp; Policy Analysts.

The study found the predicted upper environmental [TFA] concentrations in the soils of Malawi and Chile and the surface waters of Germany to be equivalent to 0.0075, 0.0094 and 0.14 mg/l a.e. (acid equivalents), respectively. For the freshwater green alga, these levels would be greater than its most toxic freshwater PNEC of 0.0062 mg/l, using an assessment factor (reflecting data uncertainty) of 100; this, the report said, “would equate to there being an environmental risk.” (Data was not available for a soil PNEC.) These calculations “took a precautionary approach and represent that might be called a worst- case scenario,” said Hanlon.

As examples, the report pointed to the absence of data on toxicity to organisms found in salt lakes and playas, which are terminal sinks for TFA and where TFA is expected to become concentrated. In addition, no measurements have been reported on the concentrations of TFA in crops for human consumption.

Many of the knowledge gaps cited by the Norwegian report involved TFA toxicity data deemed “inadequate or missing, not allowing a thorough assessment of the effects this may have on the wider environment.”

About one third of TFA is moved by rivers, which results in “a considerable amount introduced in terrestrial environments where TFA is susceptible to leaching into the groundwater,” the report said. But there have been few studies on TFA concentrations in groundwater. “This needs to be addressed due to potential implications for drinking water,” it said.