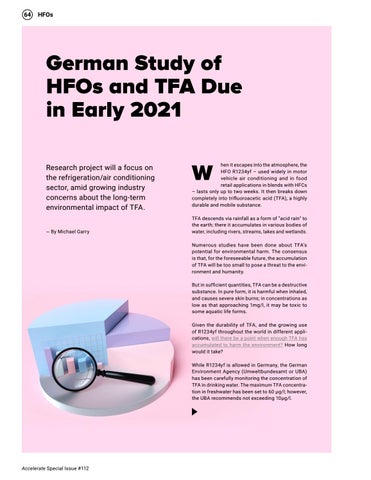 German Study of HFOs and TFA Due in Early 2021 Research project will a focus on the refrigeration/air conditioning sector, amid growing industry concerns about the long-term environmental impact of TFA. — By Michael Garry

hen it escapes into the atmosphere, the HFO R1234yf – used widely in motor vehicle air conditioning and in food retail applications in blends with HFCs – lasts only up to two weeks. It then breaks down completely into trifluoroacetic acid (TFA), a highly durable and mobile substance. TFA descends via rainfall as a form of “acid rain" to the earth; there it accumulates in various bodies of water, including rivers, streams, lakes and wetlands. Numerous studies have been done about TFA’s potential for environmental harm. The consensus is that, for the foreseeable future, the accumulation of TFA will be too small to pose a threat to the environment and humanity. But in sufficient quantities, TFA can be a destructive substance. In pure form, it is harmful when inhaled, and causes severe skin burns; in concentrations as low as that approaching 1mg/l, it may be toxic to some aquatic life forms. Given the durability of TFA, and the growing use of R1234yf throughout the world in different applications, will there be a point when enough TFA has accumulated to harm the environment? How long would it take? While R1234yf is allowed in Germany, the German Environment Agency (Umweltbundesamt or UBA) has been carefully monitoring the concentration of TFA in drinking water. The maximum TFA concentration in freshwater has been set to 60 µg/l; however, the UBA recommends not exceeding 10µg/l.

Accelerate Special Issue #112 provides an in-depth look at where the natural refrigerant and sustainable cooling market is heading in the co...

Accelerate Special Issue #112 provides an in-depth look at where the natural refrigerant and sustainable cooling market is heading in the co...