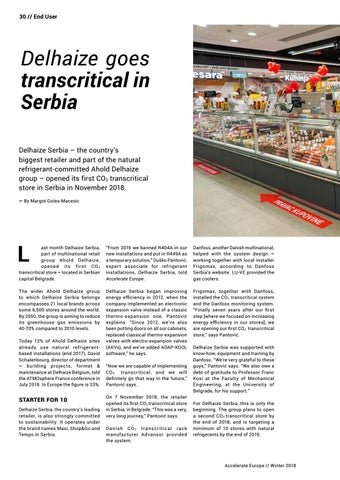 “From 2016 we banned R404A in our new installations and put in R449A as a temporary solution,” Duško Pantović, exper t associate for refrigerant installations, Delhaize Serbia, told Accelerate Europe.

Danfoss, another Danish multinational, helped with the system design – working together with local installer Frigomax, according to Danfoss Serbia’s website. LU-VE provided the gas coolers.

The wider Ahold Delhaize group to which Delhaize Serbia belongs encompasses 21 local brands across some 6,500 stores around the world. By 2050, the group is aiming to reduce its greenhouse gas emissions by 40-70% compared to 2010 levels.

Delhaize Serbia began improving energy efficiency in 2012, when the company implemented an electronic expansion valve instead of a classic thermo - expansion one, Pantović explains. “Since 2012, we’ve also been putting doors on all our cabinets, replaced classical thermo-expansion valves with electro-expansion valves (AKVs), and we&#39;ve added ADAP-KOOL software,” he says.

STARTER FOR 10 Delhaize Serbia, the country’s leading retailer, is also strongly committed to sustainability. It operates under the brand names Maxi, Shop&amp;Go and Tempo in Serbia.

Delhaize Serbia was supported with know-how, equipment and training by Danfoss. “We’re very grateful to these guys,” Pantović says. “We also owe a debt of gratitude to Professor Franc Kosi at the Faculty of Mechanical Engineering, at the University of Belgrade, for his support.” For Delhaize Serbia, this is only the beginning. The group plans to open a second CO 2 transcritical store by the end of 2018, and is targeting a minimum of 10 stores with natural refrigerants by the end of 2019.

THE CO2 MAGICIAN As 2018 draws to a close, it’s once again time to celebrate the innovators who have done the most to disrupt the HVAC&R industry and help make the business case for natural refrigerants even more compelling. In an evening ceremony at the ATMOsphere Europe 2018 conference in November, five visionary movers and shakers were recognised with Accelerate Europe awards for their unique contributions to advancing natural refrigerants in Europe over the past year. This issue’s cover star, Sergio Girotto, richly deserves his Accelerate Europe Person of the Year crown. During his long career in the HVAC&R industry, he has worked tirelessly to bring CO2 to new areas of application. Of all his achievements, he is perhaps best known for installing the first-ever CO2 transcritical system in a large supermarket, in 2001. Accelerate Europe sat down with the enEX president to find out what’s next for him and for the HVAC&R industry. Read this and more in the new Accelerate Europe!