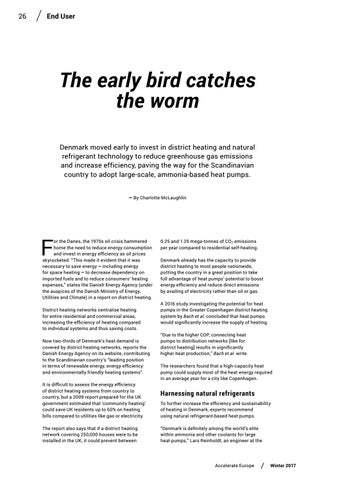 or the Danes, the 1970s oil crisis hammered home the need to reduce energy consumption and invest in energy efficiency as oil prices skyrocketed. “This made it evident that it was necessary to save energy – including energy for space heating – to decrease dependency on imported fuels and to reduce consumers’ heating expenses,” states the Danish Energy Agency (under the auspices of the Danish Ministry of Energy, Utilities and Climate) in a report on district heating. District heating networks centralise heating for entire residential and commercial areas, increasing the efficiency of heating compared to individual systems and thus saving costs. Now two-thirds of Denmark’s heat demand is covered by district heating networks, reports the Danish Energy Agency on its website, contributing to the Scandinavian country’s “leading position in terms of renewable energy, energy efficiency and environmentally friendly heating systems”. It is difficult to assess the energy efficiency of district heating systems from country to country, but a 2009 report prepared for the UK government estimated that ‘community heating’ could save UK residents up to 60% on heating bills compared to utilities like gas or electricity. The report also says that if a district heating network covering 250,000 houses were to be installed in the UK, it could prevent between

0.25 and 1.25 mega-tonnes of CO 2 emissions per year compared to residential self-heating. Denmark already has the capacity to provide district heating to most people nationwide, putting the country in a great position to take full advantage of heat pumps’ potential to boost energy efficiency and reduce direct emissions by availing of electricity rather than oil or gas. A 2016 study investigating the potential for heat pumps in the Greater Copenhagen district heating system by Bach et al. concluded that heat pumps would significantly increase the supply of heating. “Due to the higher COP, connecting heat pumps to distribution networks [like for district heating] results in significantly higher heat production,” Bach et al. write. The researchers found that a high-capacity heat pump could supply most of the heat energy required in an average year for a city like Copenhagen.

HONOURING THE TRAILBLAZERS The past twelve months have been full of innovation in the HVAC&R sector. The winter 2017 edition of Accelerate Europe celebrates the people, companies and ideas that are disrupting the HVAC&R industry and making the business case for natural refrigerants even more compelling. This issue focuses on the first ever Accelerate Europe awards, which were presented to five visionary movers and shakers in an evening ceremony at the ATMOsphere Europe conference – organised by Accelerate publisher shecco – in Berlin in September. The cover star, Menno van der Hoff, has devoted much of his career to furthering the cause of natural refrigerants in HVAC applications. Accelerate Europe sat down with the Person of the Year award winner to find out what makes him tick. ATMOsphere Europe participants in Berlin were asked to choose the Innovation of the Year award winner in an exciting poll. End users, meanwhile, were recognised with Best in Sector awards in three differ