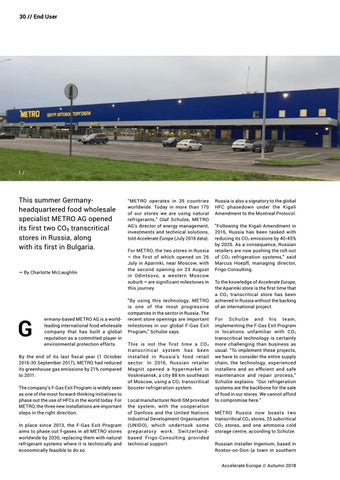 This summer Germanyheadquartered food wholesale specialist METRO AG opened its first two CO 2 transcritical stores in Russia, along with its first in Bulgaria.

ermany-based METRO AG is a worldleading international food wholesale company that has built a global reputation as a committed player in environmental protection efforts.

By the end of its last fiscal year (1 October 2016-30 September 2017), METRO had reduced its greenhouse gas emissions by 21% compared to 2011. The company’s F-Gas Exit Program is widely seen as one of the most forward-thinking initiatives to phase out the use of HFCs in the world today. For METRO, the three new installations are important steps in the right direction. In place since 2013, the F-Gas Exit Program aims to phase out f-gases in all METRO stores worldwide by 2030, replacing them with natural refrigerant systems where it is technically and economically feasible to do so.

“METRO operates in 35 countries worldwide. Today in more than 170 of our stores we are using natural refrigerants,” Olaf Schulze, METRO AG’s director of energy management, investments and technical solutions, told Accelerate Europe (July 2018 data). For METRO, the two stores in Russia – the first of which opened on 26 July in Aparinki, near Moscow, with the second opening on 23 August in Odintsovo, a western Moscow suburb – are significant milestones in this journey. &quot;By using this technology, METRO is one of the most progressive companies in the sector in Russia. The recent store openings are important milestones in our global F-Gas Exit Program,&quot; Schulze says. This is not the first time a CO 2 transc ritical syste m has bee n installed in Russia’s food retail sector. In 2016, Russian retailer Magnit opened a hypermarket in Voskresensk, a city 88 km southeast of Moscow, using a CO 2 transcritical booster refrigeration system. Local manufacturer Nord-SM provided the system, with the cooperation of Danfoss and the United Nations Industrial Development Organisation (UNIDO), which under took some preparator y wor k . S witzerland based Frigo - Consulting provided technical support.

Russia is also a signatory to the global HFC phasedown under the Kigali Amendment to the Montreal Protocol. &quot;Following the Kigali Amendment in 2016, Russia has been tasked with reducing its CO 2 emissions by 40-45% by 2025. As a consequence, Russian retailers are now pushing the roll-out of CO 2 refrigeration systems,&quot; said Marcus Hoepfl, managing director, Frigo-Consulting. To the knowledge of Accelerate Europe, the Aparinki store is the first time that a CO 2 transcritical store has been achieved in Russia without the backing of an international project. Fo r S c h u lze a n d h is te a m , implementing the F-Gas Exit Program in locations unfamiliar with CO 2 transcritical technology is certainly more challenging than business as usual. &quot;To implement these projects, we have to consider the entire supply chain, the technology, experienced installers and an efficient and safe maintenance and repair process,” Schulze explains. “Our refrigeration systems are the backbone for the sale of food in our stores. We cannot afford to compromise here.&quot; ME TRO Russia now boasts two transcritical CO 2 stores, 25 subcritical CO 2 stores, and one ammonia cold storage centre, according to Schulze. Russian installer Ingenium, based in Rostov-on-Don (a town in southern Accelerate Europe // Autumn 2018