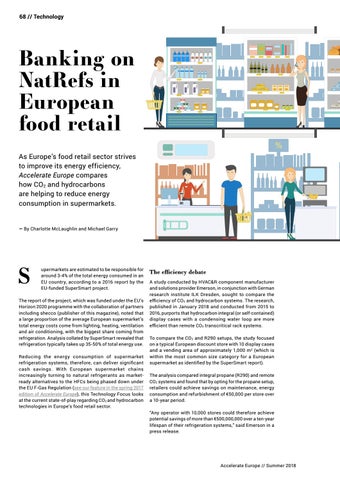 Banking on NatRefs in European food retail As Europe’s food retail sector strives to improve its energy efficiency, Accelerate Europe compares how CO 2 and hydrocarbons are helping to reduce energy consumption in supermarkets.

— By Charlotte McLaughlin and Michael Garry

upermarkets are estimated to be responsible for around 3-4% of the total energy consumed in an EU country, according to a 2016 report by the EU-funded SuperSmart project.

The report of the project, which was funded under the EU’s Horizon 2020 programme with the collaboration of partners including shecco (publisher of this magazine), noted that a large proportion of the average European supermarket’s total energy costs come from lighting, heating, ventilation and air conditioning, with the biggest share coming from refrigeration. Analysis collated by SuperSmart revealed that refrigeration typically takes up 35-50% of total energy use. Reducing the energy consumption of supermarket refrigeration systems, therefore, can deliver significant cash savings. With European supermarket chains increasingly turning to natural refrigerants as marketready alternatives to the HFCs being phased down under the EU F-Gas Regulation (see our feature in the spring 2017 edition of Accelerate Europe), this Technology Focus looks at the current state-of-play regarding CO 2 and hydrocarbon technologies in Europe’s food retail sector.

The efficiency debate A study conducted by HVAC&amp;R component manufacturer and solutions provider Emerson, in conjunction with German research institute ILK Dresden, sought to compare the efficiency of CO 2 and hydrocarbon systems. The research, published in January 2018 and conducted from 2015 to 2016, purports that hydrocarbon integral (or self-contained) display cases with a condensing water loop are more efficient than remote CO 2 transcritical rack systems. To compare the CO 2 and R290 setups, the study focused on a typical European discount store with 10 display cases and a vending area of approximately 1,000 m2 (which is within the most common size category for a European supermarket as identified by the SuperSmart report). The analysis compared integral propane (R290) and remote CO 2 systems and found that by opting for the propane setup, retailers could achieve savings on maintenance, energy consumption and refurbishment of €50,000 per store over a 10-year period. “Any operator with 10,000 stores could therefore achieve potential savings of more than €500,000,000 over a ten-year lifespan of their refrigeration systems,” said Emerson in a press release.

HEINEKEN: CHEERS TO A GREENER WORLD!