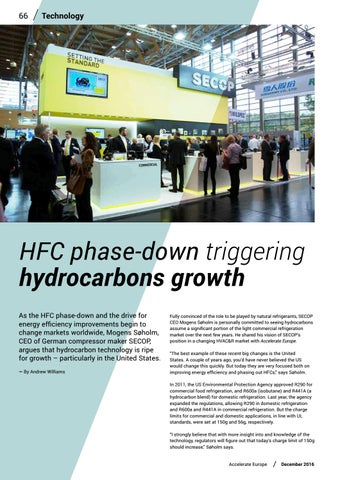 Fully convinced of the role to be played by natural refrigerants, SECOP CEO Mogens Søholm is personally committed to seeing hydrocarbons assume a significant portion of the light commercial refrigeration market over the next few years. He shared his vision of SECOP’s position in a changing HVAC&R market with Accelerate Europe. “The best example of these recent big changes is the United States. A couple of years ago, you’d have never believed the US would change this quickly. But today they are very focused both on improving energy efficiency and phasing out HFCs,” says Søholm. In 2011, the US Environmental Protection Agency approved R290 for commercial food refrigeration, and R600a (isobutane) and R441A (a hydrocarbon blend) for domestic refrigeration. Last year, the agency expanded the regulations, allowing R290 in domestic refrigeration and R600a and R441A in commercial refrigeration. But the charge limits for commercial and domestic applications, in line with UL standards, were set at 150g and 56g, respectively. “I strongly believe that with more insight into and knowledge of the technology, regulators will figure out that today’s charge limit of 150g should increase,” Søholm says. Accelerate Europe