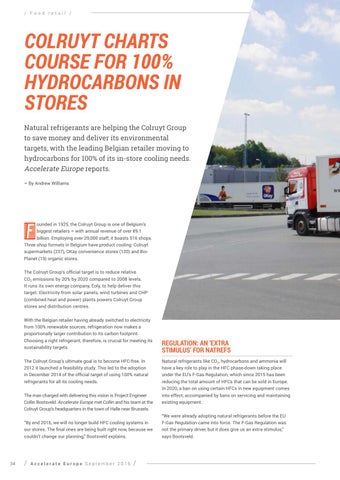 COLRUYT CHARTS COURSE FOR 100% HYDROCARBONS IN STORES Natural refrigerants are helping the Colruyt Group to save money and deliver its environmental targets, with the leading Belgian retailer moving to hydrocarbons for 100% of its in-store cooling needs. Accelerate Europe reports. – By Andrew Williams

ounded in 1925, the Colruyt Group is one of Belgium’s biggest retailers – with annual revenue of over €9.1 billion. Employing over 29,000 staff, it boasts 516 shops. Three shop formats in Belgium have product cooling: Colruyt supermarkets (237), OKay convenience stores (120) and BioPlanet (19) organic stores.

The Colruyt Group’s official target is to reduce relative CO2 emissions by 20% by 2020 compared to 2008 levels. It runs its own energy company, Eoly, to help deliver this target. Electricity from solar panels, wind turbines and CHP (combined heat and power) plants powers Colruyt Group stores and distribution centres. With the Belgian retailer having already switched to electricity from 100% renewable sources, refrigeration now makes a proportionally larger contribution to its carbon footprint. Choosing a right refrigerant, therefore, is crucial for meeting its sustainability targets. The Colruyt Group’s ultimate goal is to become HFC-free. In 2012 it launched a feasibility study. This led to the adoption in December 2014 of the official target of using 100% natural refrigerants for all its cooling needs. The man charged with delivering this vision is Project Engineer Collin Bootsveld. Accelerate Europe met Collin and his team at the Colruyt Group’s headquarters in the town of Halle near Brussels. “By end 2016, we will no longer build HFC cooling systems in our stores. The final ones are being built right now, because we couldn’t change our planning,” Bootsveld explains.

REGULATION: AN ‘EXTRA STIMULUS’ FOR NATREFS Natural refrigerants like CO2, hydrocarbons and ammonia will have a key role to play in the HFC phase-down taking place under the EU’s F-Gas Regulation, which since 2015 has been reducing the total amount of HFCs that can be sold in Europe. In 2020, a ban on using certain HFCs in new equipment comes into effect, accompanied by bans on servicing and maintaining existing equipment. “We were already adopting natural refrigerants before the EU F-Gas Regulation came into force. The F-Gas Regulation was not the primary driver, but it does give us an extra stimulus,” says Bootsveld.