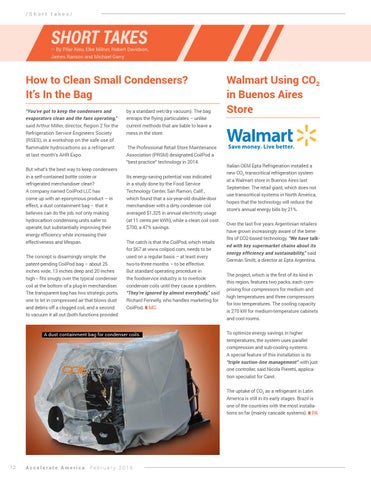 How to Clean Small Condensers? It’s In the Bag “You’ve got to keep the condensers and evaporators clean and the fans operating,” said Arthur Miller, director, Region 2 for the Refrigeration Service Engineers Society (RSES), in a workshop on the safe use of flammable hydrocarbons as a refrigerant at last month’s AHR Expo. But what’s the best way to keep condensers in a self-contained bottle cooler or refrigerated merchandiser clean? A company named CoilPod LLC has come up with an eponymous product – in effect, a dust containment bag -- that it believes can do the job, not only making hydrocarbon condensing units safer to operate, but substantially improving their energy efficiency while increasing their effectiveness and lifespan. The concept is disarmingly simple: the patent-pending CoilPod bag – about 25 inches wide, 13 inches deep and 20 inches high -- fits snugly over the typical condenser coil at the bottom of a plug-in merchandiser. The transparent bag has two strategic ports, one to let in compressed air that blows dust and debris off a clogged coil, and a second to vacuum it all out (both functions provided

by a standard wet/dry vacuum). The bag entraps the flying particulates – unlike current methods that are liable to leave a mess in the store. The Professional Retail Store Maintenance Association (PRSM) designated CoilPod a “best practice” technology in 2014. Its energy-saving potential was indicated in a study done by the Food Service Technology Center, San Ramon, Calif., which found that a six-year-old double-door merchandiser with a dirty condenser coil averaged $1,325 in annual electricity usage (at 11 cents per kWh), while a clean coil cost $700, a 47% savings. The catch is that the CoilPod, which retails for $67 at www.coilpod.com, needs to be used on a regular basis – at least every two-to-three months – to be effective. But standard operating procedure in the foodservice industry is to overlook condenser coils until they cause a problem. “They’re ignored by almost everybody,” said Richard Fennelly, who handles marketing for CoilPod. MG

Italian OEM Epta Refrigeration installed a new CO2 transcritical refrigeration system at a Walmart store in Buenos Aires last September. The retail giant, which does not use transcritical systems in North America, hopes that the technology will reduce the store’s annual energy bills by 21%. Over the last five years Argentinian retailers have grown increasingly aware of the benefits of CO2-based technology. “We have talked with key supermarket chains about its energy efficiency and sustainability,” said Germán Smitt, a director at Epta Argentina. The project, which is the first of its kind in this region, features two packs, each comprising four compressors for medium and high temperatures and three compressors for low temperatures. The cooling capacity is 270 kW for medium-temperature cabinets and cool rooms. To optimize energy savings in higher temperatures, the system uses parallel compression and sub-cooling systems. A special feature of this installation is its “triple suction-line management” with just one controller, said Nicola Pieretti, application specialist for Carel. The uptake of CO2 as a refrigerant in Latin America is still in its early stages. Brazil is one of the countries with the most installations so far (mainly cascade systems). PA