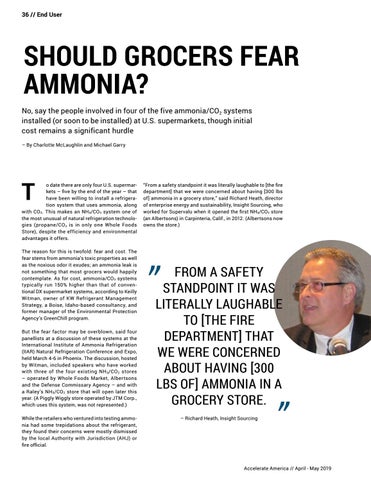 SHOULD GROCERS FEAR AMMONIA? No, say the people involved in four of the five ammonia/CO2 systems installed (or soon to be installed) at U.S. supermarkets, though initial cost remains a significant hurdle – By Charlotte McLaughlin and Michael Garry

o date there are only four U.S. supermarkets – five by the end of the year – that have been willing to install a refrigeration system that uses ammonia, along with CO 2 . This makes an NH 3 /CO 2 system one of the most unusual of natural refrigeration technologies (propane/CO 2 is in only one Whole Foods Store), despite the efficiency and environmental advantages it offers. The reason for this is twofold: fear and cost. The fear stems from ammonia’s toxic properties as well as the noxious odor it exudes; an ammonia leak is not something that most grocers would happily contemplate. As for cost, ammonia/CO 2 systems typically run 150% higher than that of conventional DX supermarket systems, according to Keilly Witman, owner of KW Refrigerant Management Strategy, a Boise, Idaho-based consultancy, and former manager of the Environmental Protection Agency’s GreenChill program. But the fear factor may be overblown, said four panellists at a discussion of these systems at the International Institute of Ammonia Refrigeration (IIAR) Natural Refrigeration Conference and Expo, held March 4-6 in Phoenix. The discussion, hosted by Witman, included speakers who have worked with three of the four existing NH 3 /CO 2 stores – operated by Whole Foods Market, Albertsons and the Defense Commissary Agency – and with a Raley’s NH 3 /CO 2 store that will open later this year. (A Piggly Wiggly store operated by JTM Corp., which uses this system, was not represented.) While the retailers who ventured into testing ammonia had some trepidations about the refrigerant, they found their concerns were mostly dismissed by the local Authority with Jurisdiction (AHJ) or fire official.

“From a safety standpoint it was literally laughable to [the fire department] that we were concerned about having [300 lbs of] ammonia in a grocery store,” said Richard Heath, director of enterprise energy and sustainability, Insight Sourcing, who worked for Supervalu when it opened the first NH 3 /CO 2 store (an Albertsons) in Carpinteria, Calif., in 2012. (Albertsons now owns the store.)

FROM A SAFETY STANDPOINT IT WAS LITERALLY LAUGHABLE TO [THE FIRE DEPARTMENT] THAT WE WERE CONCERNED ABOUT HAVING [300 LBS OF] AMMONIA IN A GROCERY STORE. – Richard Heath, Insight Sourcing