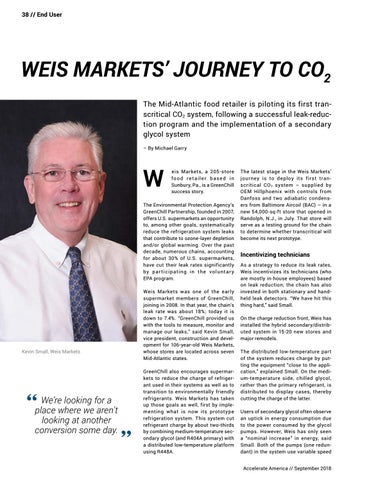 WEIS MARKETS’ JOURNEY TO CO2 The Mid-Atlantic food retailer is piloting its first transcritical CO2 system, following a successful leak-reduction program and the implementation of a secondary glycol system – By Michael Garry

eis Markets, a 205 -store food retailer based in Sunbury, Pa., is a GreenChill success story.

The Environmental Protection Agency’s GreenChill Partnership, founded in 2007, offers U.S. supermarkets an opportunity to, among other goals, systematically reduce the refrigeration system leaks that contribute to ozone-layer depletion and/or global warming. Over the past decade, numerous chains, accounting for about 30% of U.S. supermarkets, have cut their leak rates significantly by p a r ti c i p a ti n g i n t h e vo l u n t a r y EPA program.

We’re looking for a place where we aren’t looking at another conversion some day.

Weis Markets was one of the early supermarket members of GreenChill, joining in 2008. In that year, the chain’s leak rate was about 18%; today it is down to 7.4%. “GreenChill provided us with the tools to measure, monitor and manage our leaks,” said Kevin Small, vice president, construction and development for 106-year-old Weis Markets, whose stores are located across seven Mid-Atlantic states. GreenChill also encourages supermarkets to reduce the charge of refrigerant used in their systems as well as to transition to environmentally friendly refrigerants. Weis Markets has taken up those goals as well, first by implementing what is now its protot ype refrigeration system. This system cut refrigerant charge by about two-thirds by combining medium-temperature secondary glycol (and R404A primary) with a distributed low-temperature platform using R448A.

The latest stage in the Weis Markets’ journey is to deploy its f irst tran scritical CO 2 system – supplied by OEM Hillphoenix with controls from Danfoss and two adiabatic condensers from Baltimore Aircoil (BAC) – in a new 54,000-sq-ft store that opened in Randolph, N.J., in July. That store will serve as a testing ground for the chain to determine whether transcritical will become its next prototype.

Incentivizing technicians As a strategy to reduce its leak rates, Weis incentivizes its technicians (who are mostly in-house employees) based on leak reduction; the chain has also invested in both stationary and handheld leak detectors. “We have hit this thing hard,” said Small. On the charge reduction front, Weis has installed the hybrid secondary/distributed system in 15-20 new stores and major remodels. The distributed low-temperature part of the system reduces charge by putting the equipment “close to the application,” explained Small. On the medium-temperature side, chilled glycol, rather than the primary refrigerant, is distributed to display cases, thereby cutting the charge of the latter. Users of secondary glycol often observe an uptick in energy consumption due to the power consumed by the glycol pumps. However, Weis has only seen a “nominal increase” in energy, said Small. Both of the pumps (one redundant) in the system use variable speed Accelerate America // September 2018